I’ve been searching for quite some time now, but I haven’t found any information yet on reading out plain old analog meters, that don’t have any LED’s for counting usage. I happen to have such an analoge meter for both gas and water, and I’m tired of setting a weekly reminder to take a picture of the meter, and entering the numbers in a spreadsheet.

It could be semi-automatic, such as a low-quality timelapse that just takes a picture of the meter every few minutes/hours/days. These can then be interpreted by a program (image recognition), or it could even be a manual step where someone goes through the images and types in the numbers in an app.

Any hints on where to start to get the hardware going, in other words, what’s the cheapest solution to make interval pictures of a meter (knowing that the meter has no backlight)? Parsing these images is someting I could try, but getting the images is the first step.

Looks like this is a good attempt that could be used: Time lapse camera

Do you need pictures, or is there another, simpler, way?

The first thing to investigate is whether your meters have a rotating magnet that can be sensed by a reed switch. It’s possible that your water meter has one; if your gas meter is fairly new, it’s likely that it will have one. The best instrument for checking is a plain old magnetic compass. The likeliest place for a magnet is in the ‘fastest’ barrel of the register. If your meter has dials rather than a digital barrel with the numbers, you probably don’t have a magnet to sense.
If that approach fails, the next thing to look for is a reflective patch that you can sense going past using an LED and a photo-transistor. This is harder to set up, requires a light-proof housing and costs a lot in terms of power. If you don’t have a reflective patch, then is it possible to see a pointer going round? This is even harder to do. I think somebody tried this (on the old forums - ‘archive’) but I can’t remember whether they succeeded or not.

I did read somewhere (maybe I noted it in the old forum some years ago) that someone had used an optical mouse sensor to detect the position of the pointer. Maybe you can find that? I also found a commercial solution using a camera and OCR - much like your proposal. It was expensive, needless to say.

Failing the magnetic solution Robert mentioned, here’s another timelapse solution.
It can use a USB camera and/or a Raspberry Pi camera.
The timelapse interval is configurable, as are the picture / video quality and size

I’ve set this up so my wife can watch the deer that visit our yard. For that, I don’t use the timelapse function.

Last year, during a particularly bad flea infestation, I used the timelapse aspect to monitor my waterbowl flea traps.
It was easy to set up and worked very well.

Some people have installed their own water meter (as well as the water company’s meter) so that they can have a pulse output. I don’t think anyone has done this with gas (most probably because there are more ‘modern’ gas meters in use that are likely to have a magnet incorporated ready for an optional sensor to be fixed on the outside).
In the UK, widespread metering of the water supply is relatively new. Gas metering is universal and has been for ever ( = more than my lifetime 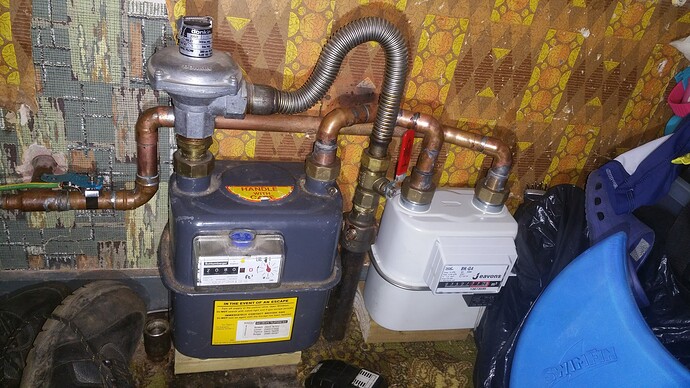 You kept that quiet.

Thanks for the feedback so far! I’ll post some pictures of my gas and water meter. I have the impression that there could be:

there could be: a LED on the gas meter

I doubt that very much - where does the power for it come from?

maybe a magnet on the gas meter (but no compass) - has anyone made this work, and has a guide with components to use?

Many people have this working. There’s a lot in the Archive (old forum). Here’s one thread:
Gas meter reed switch debounce (polled, via interrupt-driven timer): http://openenergymonitor.org/emon/node/5022#comment-21046

But I’ve just noticed - the search facility on the old forum has disappeared. @glyn.hudson or @TrystanLea - why is this?

Putting my own meter in between is a very good idea, any hints on what to get?

There are many suppliers. The main point is it needs to be for potable (drinking) water. The maximum flow rate (pipe size) will need to be similar to your existing meter, and the pulse rate high enough to give the resolution you want and slow enough to count reliably. You’ll need to work that out based on the maximum flow rate that you need.
Water meter suggestions: http://openenergymonitor.org/emon/node/12123

I’ve elevated your permissions so you should be able to post pictures here. Please don’t put them on a third-party site with a link.

I’m not sure which is cooler… The User owned gas meter OR the wallpaper! 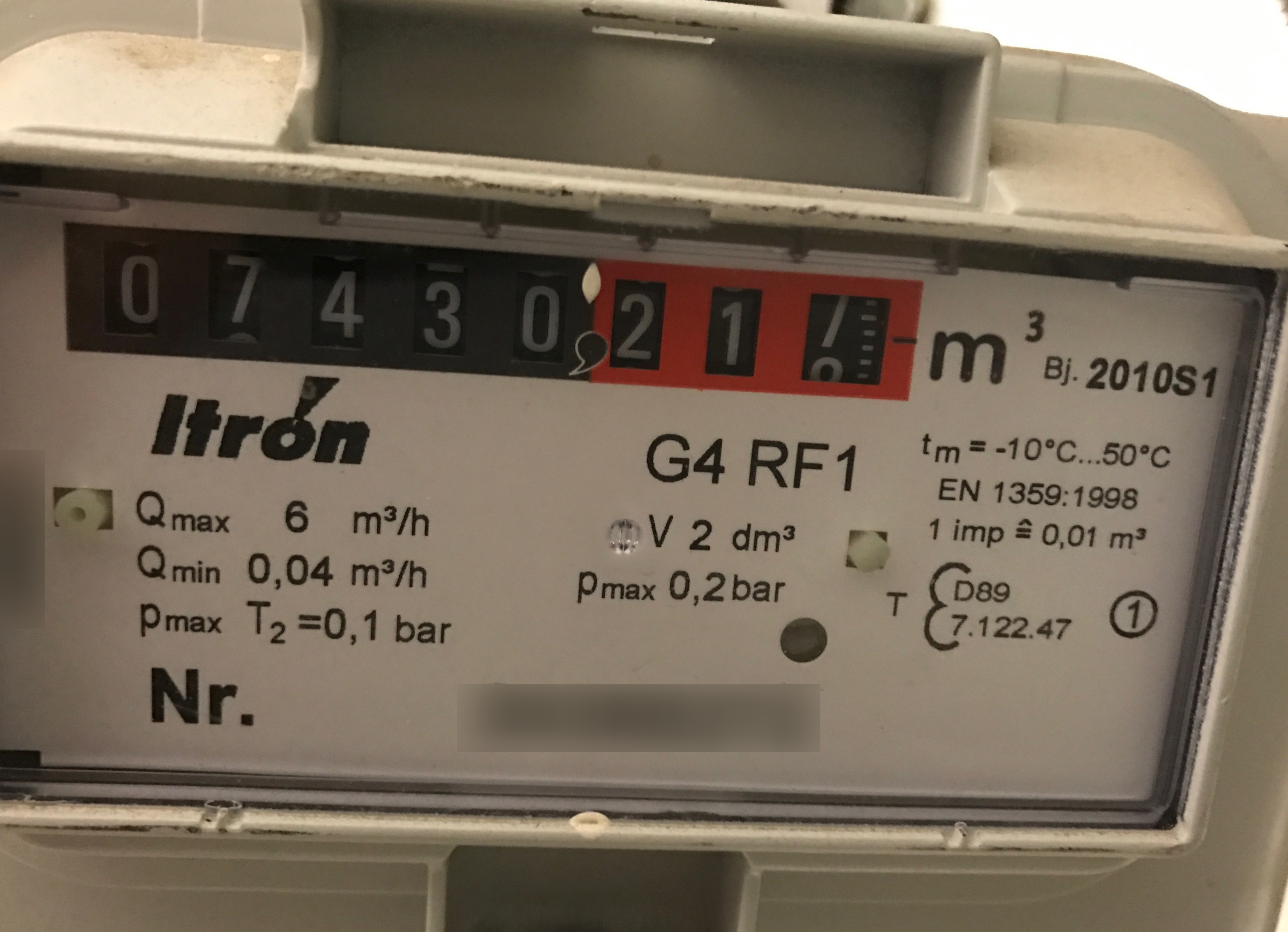 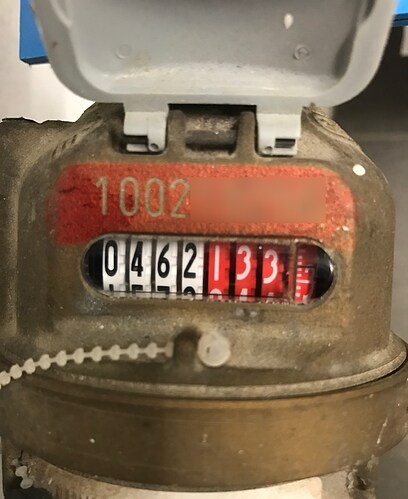 The cavity on top of the gas meter seems a too good fit for a reed switch.

Well, this is even better! Learn | OpenEnergyMonitor

What are you trying to say @Jon?

I will say if your going to put a check meter in, put a sticker on it indicating its a private meter do not read, its not the first time a meter reader cant read one meter correctly let alone confuse the poor fella with two meters…

The water meter needs to be WRAS approved (As Robert said potable), there are also two types of water meter, Single Jet and Multi Jet. The difference is the price and accuracy, if you are patient you can find a second hand Multi Jet meter with a reed switch attached on eBay for about £40.

WRAS probably means nothing in Belgium - it’s the body that sets the standards for equipment in/around the water supply in the UK.

What are you trying to say @Jon?

I’d swear blind that I inherited that wallpaper, and hadn’t got round to doing anything about it.

Is it possible that your water meter has a “remote read” capability? My water meter is “analog” (physical wheels that go round) and is in the middle of a field with no electricity supply, but the meter-reading person reads it while simply driving past in a van. They don’t get out of the van and I don’t suppose they know exactly where the meter is.

Water companies have a programme of replacing older meters by these “AMR” devices as it saves them money. EG Water meters - help and advice

It has occasionally occurred to me to see if I could acquire and/or make a reader that could emulate this and feed it into my Emon system, but I haven’t progressed this idea. I’d be interested if anyone else has tried it.

(I haven’t looked into it, but I think the energy needed to perform the meter reading comes entirely from the reading device via RF waves; I don’t think the meter itself has a battery but I could be wrong.)