It’s never been an issue as far an I’m aware, but I’ve recently been asked by a user if the RaspberryPi core temperature could be posted to Emoncms to enable an early warning error to trigger if the core starts to get dangerously hot. The RasPi SOC can handle up to 85 degC (throttling starts at 80 degC) so this would only be an issue in extreme environments.

Before I start work on this has anyone done something similar?

Here is an example of using emonHub socket interfacer: https://github.com/openenergymonitor/emonhub/blob/emon-pi/configuration.md#d-socket-interfacer

Raspberry Pi is a pretty powerful device. That is why people are using their raspberry pi for performing some intensive tasks that squeeze…

Is this really necessary?

Is the emonpi worked so hard that it gets anywhere near the limits of 80deg?
Especially as it’s not even a full OS version.
My Pi 3 running emoncms, node-red, 2 websites, media server plus lots more, fitted in a tight fitting pi case measures;

How many Pi’s do we have running in hostile environments? In those isolated cases, it may be easier for users to run the command from within node-red with a trigger to a push/email/twitter node if temp > 75deg.
So I would question the value of running yet another script, other than being a novelty to emonpi.

Is this really necessary?

Probably not, but doesn’t do any harm? It could be useful for debugging, I know it’s already visible in emoncms admin page.

How many Pi’s do we have running in hostile environments? In those isolated cases, it may be easier for users to run the command from within node-red with a trigger to a push/email/twitter node if temp > 75deg.

So I would question the value of running yet another script, other than being a novelty to emonpi.

The user who has contacted me has got a large number fun units being deployed in sealed waterproof encloses in hostile environments and wanted a way to keep track of the temperature. I thought it might not be a bad idea to get some sort of ‘official’ service script up and running to do this since I’m sure it could be of interest to other users. It would also serve as an example of who to input data into an emonPi/emonBase unit making use of emonHub to post the data to both local and remote emoncms.

Before I start work on this has anyone done something similar?

Yes, I include the monitoring of host system stats with all my deployments.

At the very least it includes CPU temperature. Many include WiFi signal, Ethernet speeds, cpu load, ram use, hdd use and /var/log use too.

Temperature alone won’t tell you much but if it’s compared to cpu load and/or ram use, or even spikes in the /var/log size it will tell you if it’s working harder or if there’s a runaway fault (increased log file sizes). Plus ambient temperature will put things in better perspective.

Here’s a graph from one of my early installs

You can see it peaks out at 75°C in June, which you might think is ok, but this monitor is installed in a plantroom/loft that gets extremely hot, this particular monitor I had to fit a PWM controlled fan to the box to keep it as low as possible. the fan is only small and varies between 40% and 100% duty cycle, from about 60°C it is on 100%. 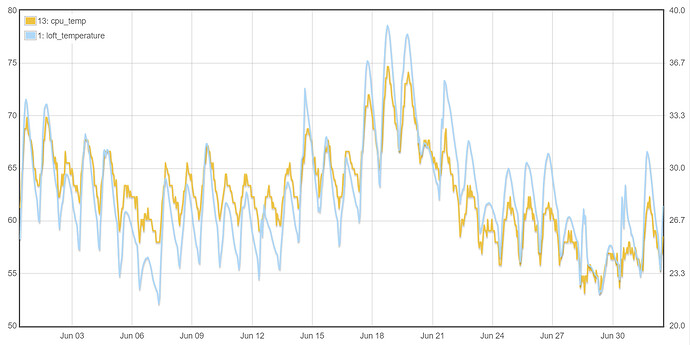 As a side note, the load on this Pi was drastically reduced (and therefore the temp lowered a fair bit) by changing the network settings to block unknown IP’s, by tracking the cpu load and logfile size I determined the Pi was under brute force ssh attacks, once they were blocked, the temp dropped.

I use python scripts that post to an emonhub socket, I don’t yet have a specific script I use for all sites, it has sort of evolved over time and I just add bits and cut away bits as needed. My intention is to eventually create an emonhub interacfer that does this internally. A user can then just configure it how they want by picking values from a list of available data to make up their own payload.

I did bring this up when the admin page was populated with temperature and disc sizes, but there was no interest then. The admin page stats are nice to have, but they offer little more than eye candy for the rare times a user logs in.

For example disc usage, if the disk usage is monitored over time, users could graph the delta to see what space they are consuming per day/week/month/year etc, this could help plan for the future (will I run out of disc space), spot issues (why did i consume twice as much data this week?) and even help evaluate the cost of shared hosting and/or using emoncms.org etc.

Logging the use of var/log could help fine tune ram usage and logrotation etc.

Actually that’s the GPU temperature, CPU temperature can be read with cat /sys/class/thermal/thermal_zone0/temp (it requires dividing by 1000)

Here’s an (early) example script, I have a monitor sat here that was temporarily installed to a
building due to be demolished and it was subsequently removed to be reused elsewhere. Therefore it doesn’t have any disc, ram or cpu load monitoring.

This is exactly the kind of thing I had in mind

That’s really interesting to know. Therefore 40 deg C ambient should be considered the upper operating limit for the RasPi / emonPi.

Therefore 40 deg C ambient should be considered the upper operating limit for the RasPi / emonPi.

There or there abouts for a fan ventilated Pi in a box, but that depends on load and other considerations. This is only running emonHub, there is no emoncms, LAMP server, MQTT or node-red etc.

The fan cooled box is well “holed” and about 240 x 180 x 120, so much larger and airier than an emonPi, With a full load and the small metal case, I think an emonPi would run hotter than my monitor.

Just for comparison here is my emonPi CPU temp. Data is gathered via Node-RED. 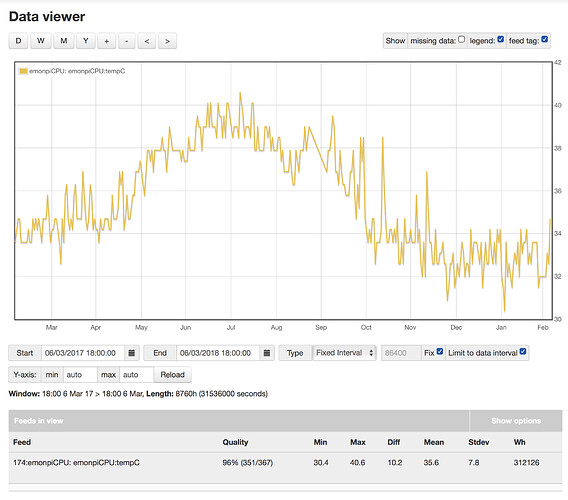 I use a php script to measure various stats about my raspberry pi 3 run as a cron job every minute. In the summer mine got up to 62 deg c when it was 31 deg c ambient temperature as shown below. Some of the scipt was borrowed off another forum, i don’t remember where from which is why it’s in php not python (yellow is outside air temperature).

I just stumbled across this picture in the forum-archives and thought I would post a link here, it demonstrates how logging some stats can be useful.