OK, that helps. Quite a bit.

mount it further away from the wall if you can. I realize that may not be practical/possible.

I could fashion a stand-off out of something or other I’m sure. How long should it be?

move it away from the wire bundle it’s adjacent to.
That’s a definite detuner / radiatiion pattern modifier.

That’s the mains supply to the house, FWIW. I could move it out onto the ply to the left of the picture. Again, how far?

bring the feedline straight out from the elements, i.e. perpendicular to them,
for a distance equal to, or greater than, the length of one element.

Rule-of-thumb is one-quarter wavelength (or more) separation distance.
(roughly the length of one element) One-half wavelength or more is better
but if that’s not possible, quarter-wave separation is better than nothing.

So mount your dipole as high and as far away from the wall and mains cables as practical.

So mount your dipole as high and as far away from the wall and mains cables as practical.

OK, the mains cables take a right angle above the picture and run above the antenna, towards the south/left. I suppose I should stay half-wave below that.

I suppose I should stay half-wave below that.

Only one of the dipole elements radiates energy. Ideally you want that one on top.
So you can try flipping it end for end. It may or may not make much, or any, difference,
but it’s easy to do.

I could fashion a stand-off out of something

If you can, mount the antenna from the center vice the ends of each element.

This thread may be of interest as well.

Probably one for @Robert.Wall but does the gauge of the EmonTX/TH antenna affect its signal strength? (I know it’s length needs to be fairly precise). I’ve moved my base station, and trying to improve their signal strength. Paul

Yes, I’ll perhaps add a length of timber batten to a block of wood. Fasten the block to the wall and the centre of the dipole to the batten. I’ve been wondering whether adding a reflector behind it would help - I started out thinking yagi-type reflector, then old satellite dish and finally Brian’s ali foil stuck to cardboard

I think I’ll also need a directional antenna if my RTR-SDR is to be of any use. It seems to come with telescopic dipoles. Any thoughts?

does the gauge of the EmonTX/TH antenna affect its signal strength?

Although it was Paul Reed who asked the question quite some time ago, I’ve answered
it here for reference.

The larger the diameter of an antenna element, the more broad-banded it tends to be.
It’s one of those things that’s of interest when an antenna is used on more than one frequency.

Since any given OEM transmitter isn’t intentionally operated at anything other than its assigned frequency (save for drift, which can be ignored) the gauge, or diameter, of the radiating
element will have minimal effect on antenna operation. (within reasonable limits. i.e. if the
element is made much larger, the effect will be noticable or even significant)

Definitely not mine - never did understand any of this stuff

It would, but the addition of said element involves more than just hanging another element or foil-covered sheet of cardboard behind the radiator. The length of the reflector as well as its spacing from the driven element are fairly critical dimensions. If either is off by more than a few percent, performance usually suffers vice improves. At 433 MHz, it’s fairly easy to be off by those “few percent,” unless care is taken to ensure accurate measurements.

I started out thinking yagi-type reflector,

That’s the correct line of thought. In addition to a reflector, a director or two ot three would
also improve performance. Adding parasitic elements (reflectors and directors) increases
effective radiated power, but at the same time decreases beamwidth which means the direction the antenna is pointing becomes important. So it’s a tradeoff between gain and
beamwidth. Considering the typical distance between OEM “transmitters” and “receivers”
it’s not likely to be a problem unless the antenna has more than 10 or 12 elements.

In a nutshell, you’d might be better off buying a UHF Yagi of the kind typically used on the
440 MHz Amateur Radio band.

To be effective at 433 MHz, it’d have to be much larger than the typical
“satellite dish.” The satellite downlink frequency is ~2 GHz, which is why the antennas
can be comparatively small.

The foil-on-cardboard method is aimed at monopole antennas. Your dipole doesn’t need
a groundplane. That’s the function of the second element.

I think I’ll also need a directional antenna if my RTR-SDR is to be of any use.

Quite the opposite, actually. You want to be able to receive signals fron any direction.
At this point, you simply want to know is any interference present?

If, at some point later you want to locate said interference, then yes,
a directional antenna would be needed.

Definitely not mine - never did understand any of this stuff

Ah, sorry. It was Paul Reed.

That reminded me of this, from a UK aerial supplier’s website:

Off-topic a little I fear.

At this point, you simply want to know is any interference present?

No I want to locate the source. Simply knowing it is there doesn’t help me at all. Obviously it’s a necessary step, but not worth setting up a specific test for.

In the good old days I would have looked for a null with a radio that used a ferrite rod. Or what about a loop antenna?

No I want to locate the source.

Then you’ll want both types.
The omni to determine if you have any QRM, and the Yagi to locate it.

That’s the ticket. If you search for “build a 440 Yagi,” you’ll find lots how-to info.
Excercise care with measurements and you should be able to build one that works well.

radio that used a ferrite rod

what about a loop antenna?

It can be done, but loops, like the loopstick, are typically used at MF/HF vice V/UHF.

It can be done, but loops, like the loopstick, are typically used at MF/HF vice V/UHF.

That looks like a project for the next millenium! I think I’ll stick to the Yagi.

I think I’ll stick to the Yagi.

If I were going to make one, I think I’d try the broomstick ultra-cheap antenna I linked to in post 34.

Been a while since I posted about this, but I just had an epiphany. 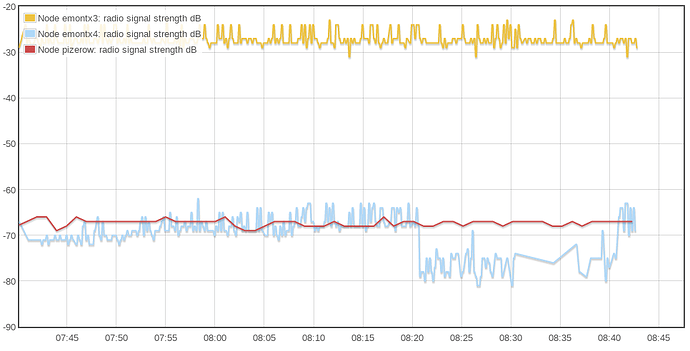 The blue line is the emonTx in the garage. At 08:21 I returned from buying my Sunday paper and parked the car. A few minutes later I looked at this graph and went out and re-parked it somewhere else.

Perhaps the most interesting thing is that it spent the entire night and previous day parked roughly where I first parked it this morning, just facing the other way. The joys of radio transmission!