I have made a short video that demonstrates the problem:

I’ve just replied on this thread, there looks like an issue with iPhone 7. Thanks for reporting, I’ve asked other developers to help test with iPhone 7

That’s for the video. That’s very useful, it looks like there is a bug with iphone7. Has the iphone 7 ever managed to load the page or does it always hang there? I’ve just tested and it works fine on an iphone 6, I’ll try and find and iphone 7 to test with.

I’ve opened an issue on github to track this issue:

It's been reported that the interface failes to load on an iphone 7 ( using IOS …12.4), see: https://drive.google.com/file/d/1S6-xt_8SqLawJKijID9nlLctJYaOSgYU/view User has reported sometimes (very rarely) it does work with the iPhone 7. When it does, the page refreshes instantly but mostly it fails as I have shown. https://community.openenergymonitor.org/t/problem-connecting-iphone-7-to-openevse-through-wifi/11696/3 I've been able to verify that it works fine on an iphone 6, is someone able to test with an iphone 7?

Thanks, what OS version is your ipad running?

I thought this problem was fixed but it has suddenly got a lot worse.

Hopefully @glyn.hudson will be able to suggest some tests I can do.

Previously the OpenEVSE was failing to load properly on an iPhone. Now it has completely stopped communicating. It no longer appears on my network with its IP of 192.168.70

It appears to be working in the sense that I can drive it with the push button but that is not what I want it for.

That is not a valid IP address.

After about 45 minutes I gave up trying to get the OpenEVSE to connect and left it alone for about 30 minutes. When I looked ‘just one more time’ it had connected to the network and could access it correctly from the desktop machine but it continues to be a problem connecting from my iPhone 7.

Signal strength indicated by the OpenEVSE is -43dBm

Previously the OpenEVSE was failing to load properly on an iPhone. Now it has completely stopped communicating. It no longer appears on my network with its IP of 192.168.70

How strong is the Wifi signal at the location of the unit? Could the unit be disconnecting and connecting slowly since the WiFi connection is weak? How many bars of WiFi does you phone show in that location?

Have you reserved the IP for the mac address? If it was Android I’d suggest using an app called Fing to see if it has appeared on a different IP address. Not sure if there is an IOS version.

This is my PC version: 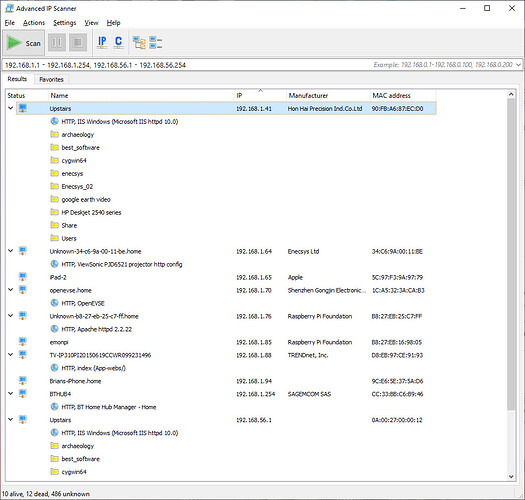 WiFi on my phone is 3 bars - max signal. 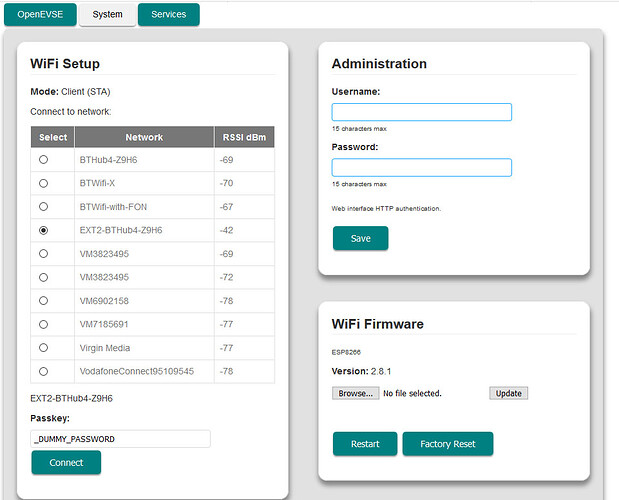 I am pleased to report that this issue is now fixed. The problem was nothing to do with the OpenEVSE but the strange behaviour of my BT Home Hub router. I shall not bore you with the details but please mark this as resolved.

I shall not bore you with the details

. That it was a problem with the BT Router is not a surprise

. That it was a problem with the BT Router is not a surprise

This happened without power cycling either the hub or the EVSE. One minute things were OK next minute the EVSE disappeared.

The forum also disclosed how to change the EVSE to a fixed IPA in the hub.

I had to switch off the hub, the EVSE and the repeater to force the hub to re-assign 192.168.1.70 after this I was able to change the hub setting to use a fixed IPA.

Hopefully that will have fixed it permanently.