Hello
I’ve bought the Emon Pi Shield kit, and sat it on a RPi 3B+. Calibrated the CTs, and the voltage, all running well and sending data to a EmonBase elsewhere in the house, by Wifi. All good.

However, contrary to what I’ve read, if I give the shield a 5V 3A USB power supply, the wifi seems to drop out (the base no longer gets the data, and the Pi+Shield no longer appear on my network). If I give the Pi (and NOT the shield) the power, the wifi all wakes up.

That would all be fine, except that I’d really like to get the enclosure for the kit, and that seems to require the power supply going to the end of the case, which is where the Shield supply is… So am I missing an obvious gotcha here?

Maybe a silly question - have you got the GPIO extender positioned height-wise so that the pins are making good contact along the entire length?

As I understand it, the emonPi Shield is exactly the same part that is used inside the emonPi, and in that configuration, power is supplied to the Shield part via the USB B connector.

Thanks @Robert.Wall. The shield is mounted onto the Pi with three M3 standoff spacers (supplied with the shied) of the right height for it all to be snug, tight and cosy. If it really should work, the only thing I can think of would be to clean the contacts, though both the shield and the Pi are new…

I can’t look at one of mine at the moment - I’m in the middle of some tests I don’t want to interrupt. But the reason I asked is the pins feel as if they don’t go a long way into the socket unless the extender is lifted off the other board by two or three millimetres.

What you’re saying only makes sense if the 5 V isn’t making it from the Shield to the Pi, and the Pi isn’t getting any power at all. And apart from the connector, the only thing I can see is the fuse FS1. I haven’t got a BOM for the Pi, so I don’t know what it is, but it’s drawn as a thermal device. It’s rated 1.5A and the PI should only draw 400 mA.

If the connector isn’t the problem, then I think it’s a case of an email to [email protected]

The shield is mounted onto the Pi with three M3 standoff spacers (supplied with the shied) of the right height for it all to be snug, tight and cosy.

If you fit the connector to the shield first and push it home (as might seem normal) the extender might not reach the Pi gpio firmly, even when the 2 boards are correctly spaced by the standoffs.

Photo would be good

The point I was trying to make, and which Paul has clarified because I can’t take one of mine apart to check, is from the feel of it, if the extender is fully home in the Shield, then on the Pi side, when the spacers meet the pcb, the connector has only mated by about 1 - 2 mm. It felt distinctly iffy to me, that’s why I’m deeply suspicious of that extender.

If @dlongson does post a picture, can it be a side-on view of the connectors and extender? (If the system doesn’t allow it, one of us will promote him.)

Thanks all. Photo attached as requested - as mounted prior to the original post (and from what you are all saying, as intended?) 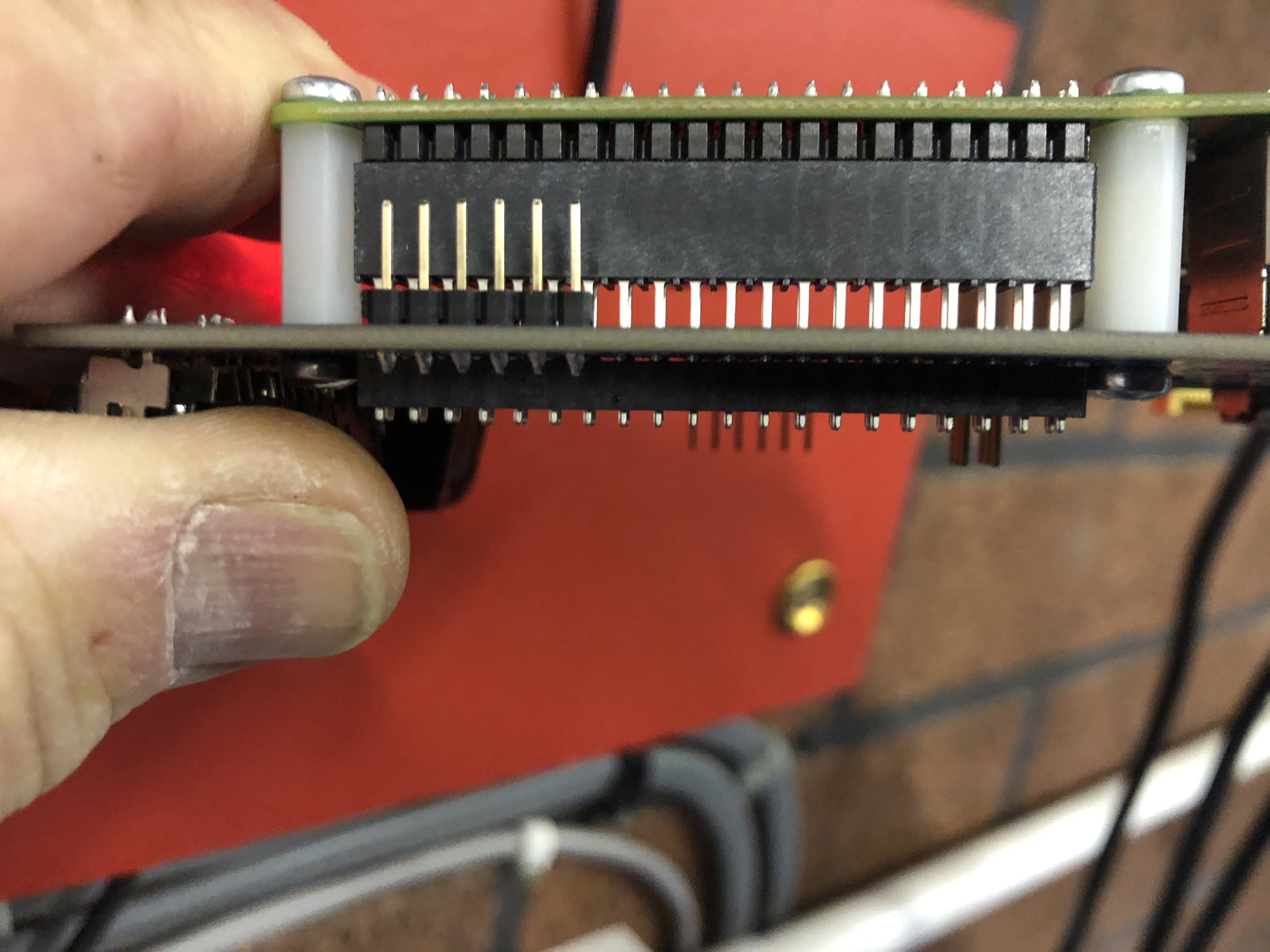 I’ll go back and give the connector a little extra ‘squeeze’ though with a fixed point at each end, that doesn’t seem too judicious. I’ll report back if I can then supply the Pi - shield combo, with wifi, from the shield.

Just as a follow-on - Squeezed the two connectors carefully, plugged the shield in to 5V, the Pi lights up and boots, but wifi stays off. Plugged in Pi instead - all works as before.

It’s not a biggy - it just means I can’t use the EmonPi case, though clearly there’s something going on that’s not as expected…

Hi Damien, Please send me a PM with your order details or alternatively email them to [email protected], we can arrange to send you a replacement.