Power consumption of Raspberry Pi 3+ vs a laptop

I have several Raspberry Pi computers of various vintages, but have never really thought they were that great for my needs, so they sit in a box in my basement. I believe they are way too powerful (and use too much energy, and require too much maintenance) to use for a single sensor. They are inexpensive, so I bought the latest version the 3B+ to give it a go again. Since I wanted to make a PR for the graphing module, I decided to give the SD card image a try to make it easy to set one up. I was able to get it set up and it appears to be working fine.

Since it is in my basement on a lightly loaded circuit that I was already measuring with my IotaWatt, I took a look at the power graph and this is what I got: 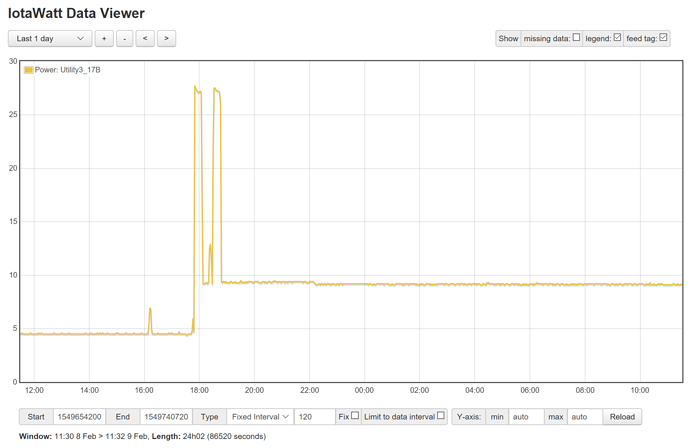 image1837×1194 114 KB
The big jump just after at 18:00 is the addition of the RPi3 and the monitor. About an hour later, I turned the monitor off. Before that, the average was just under 5W. There is an Amazon Echo and some other minor things on the circuit. The Echo typically draws a couple of W. Until just after 22:00 the IotaWatt was sending lots of historical data to emoncms on the RPi. Here is a close up of that transition: 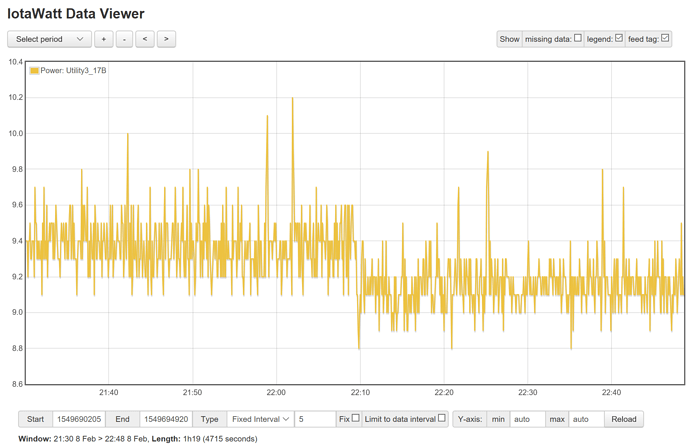 Doing the math, that means the RPi is using about 4.5W of power. Is that consistent with what others have measured?

Here is another graph: 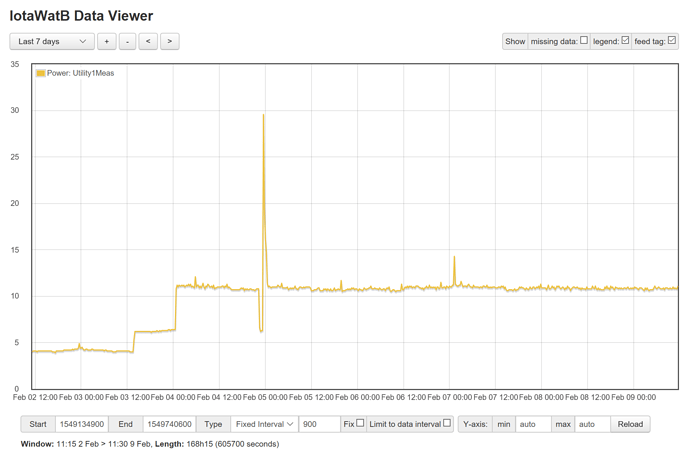 image1818×1201 126 KB
this one shows a different circuit in the basement. The line just under is 5W is from two IotaWatts and a couple of esp8266 based devices. The jump to just over 5W was the addition of two more esp8266 based devices. The jump to just over 10W was the addition of my laptop which is running Windows 10 and: MQTT, NodeRED, InfluxDB, Grafana, OpenHAB. So, it seems, on average, my Laptop (with its display off and not charging the battery) is using just about the same power as a RPi. Now, of course, my laptop will draw more power when it turns on the display, or I ask it to do something significant. But, after looking at these numbers, it seems using a laptop for this purpose was not such a power consuming idea as many people say it is, or was even a few years ago. I know that I would rather have the power of my laptop available when I need it, especially since I only need to pay the price of extra power consumption when I am asking for something more.

Anyone else done this type of measurement?
What were your results?

Looking at the power numbers, I think I see Alexa waking up and phoning home every once in awhile and definitely when I make a sound and she has to figure out if I am talking to her or not.

I’ve run an HP 15-f033wm laptop as an Influx / Grafana server, for the last couple of years.
Shortly after buying it, I became curious about its power consumption. I was quite surprised when
I connected it to a Kill-A-Watt meter. The KAW read ~8 Watts.

After I read your post, I decided to check it again, this time with a WattsOn power transducer and
Magnelab 5 Amp CT.

I wound 50 turns through the CT window and adjusted the math accordingly.
Sampling rate was 1 Hz. Here’s the results:

The drop at the start of the trace reflects the display powering off when I shut the laptop’s cover.
Not quite as thrifty as a Pi, but not outrageous either. And, as you mentioned, when the “horsepower”
is needed, it’s readily available.

That’s a great result also. Mobile laptops have come a long way and usually work hard to maximize battery life. All that work can payoff when it comes to running them in an always on mode with little work to do.

Here’s another view. Battery charging is visible this time. I disconnected the AC line cable from the
mains for about half an hour. ~12.5 Watts max during battery charging - not too shabby.