Hello
my setup includes two Tesla home batteries fed from a Tesla Gateway (as well as PV and two ASHP), and a PodPoint Solo.

The supply to my podpoint Solo comes off a Henley block positioned between the Tesla gateway and the electricity meter. It’s a 7kW setup (as can be seen in the graph below)

I have a longstanding energy monitoring setup around the house using the OpenEnergy setup and EmonCMS, with a variety of CT clamps that give me too much data

The car charging worked fine, till recently. The graph below just shows the total current coming into the house (orange line) (i.e. before the gateway/podpoint split, as well as the current after the spit (blue line), which is the current going to the Tesla gateway

Before 0030, there’s no current at all, as the Tesla batteries are providing the feed to the house (i.e. no grid consumption). At 0030 the batteries start to charge, and about 30A flow through. A few minutes later, the podpoint turns on and the current jumps to 60A - 30 to each of the Tesla and the PodPoint.

At about 0230, the Tesla home batteries are full, and the podpoint continues to charge the car till 0430.

What is odd is:

What is going on?

FWIW, taking the PodPoint CT clamp on or off makes no difference to the phenomenon.
I also noticed that if I run the ASHP, for example, it stops the oscillation - so it seems more to do with the total current, rather than anything to do with the Tesla Gateway itself 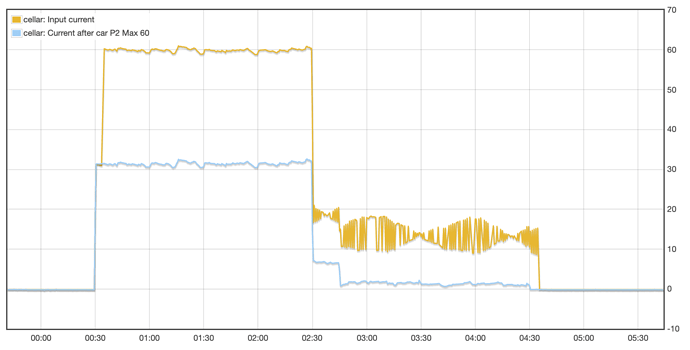 Explain what you mean by that. How do you know harmonics are involved? I can’t work out, from that screenshot, why you think that.

Sorry if that’s the wrong term! I’m trying to understand the reason for, and the cure for, the oscillatory pattern which is present in the screenshot from 0230 to 0430. I thought that the presence of a wave pattern which was itself made of higher frequency waves was a harmonic pattern, but maybe not!

I take it you’ve read the ‘Learn’ article about multiple energy diverters - which is effectively the situation you’re in. I think you’ve got competing feedback loops, rather than a problem with harmonic currents, but it’s an outside possibility you have both. The fact that adding another load damps the oscillation lends weight to two interacting feedback loops being the root cause.

You need to draw a diagram showing where the various are connected in relation to each other, and where their monitoring points are located. 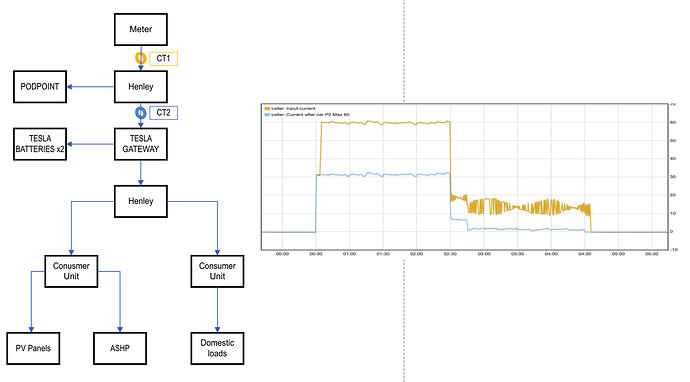 However, there should be no ‘hierarchy’ or concept of surplus here, as the Podpoint should just take its 30A, and then the tesla batteries take another 30A - just as if I had several (large) heaters on in the house? We’re not really optionally diverting loads based on an algorithm? There’s another 40A left on the 100A feed, the Tesla batteries are set to throttle back their charging at a total houseload load of 80A (not met in this ilustration) - and the Podpoint cuts its demand off if there’s a load on the house of >60A . The oscillation occurs with or without the PodPoint clamp anyway

I realise my posts in this thread relates to a specific setup, of interest to only a few, but possibly open to comment from some of the electrical systems designers here who blow me away with their knowledge

I have investigated further

The oscillations seem to occur when the Tesla battery is supplying the house, AND if the PodPoint 60A CT clamp is located at the same point as the OEM CT2 clamp as shown in the previous post

If the PodPoint 60A CT is moved to the same position as the OEM CT1 clamp as shown in the previous post, the oscillations stop, and the current drawn by the PodPoint doubles

The obvious answer is to leave the PodPoint clamp in the CT1 position - BUT that means that in winter between 0030 and 0430 the batteries are charging (30A) and the house is consuming AND the ASHP might be on. That would add up to 30-60A straightaway which means that if the podpoint tried to charge the car (another 30A), it would shut itself down immediately.

I asked podpoint if they could adjust the threshold of the cut-off, but they said they ‘weren’t allowed to’ (even though the house feeds are 100A)

So - can any of the electrical engineering gurus explain what causes the oscillation and is there any way round this?

(And before Robert tells me off for lack of accuracy (!) when I say ‘PodPoint 60A CT clamp’, I mean 'the CT clamp provided by podpoint that tells the charger software when the current passing at that point exceeds 60A as a safety cut-off. )

However, there should be no ‘hierarchy’ or concept of surplus here,

Ah, but I’m sure there is, somewhere. Maybe not a ‘surplus’, but for that read ‘available capacity’. Two things are fighting for available capacity - most likely the Podpoint to charge the car and the batteries to charge themselves. What’s the function of the Tesla Gateway? Does that do any controlling of any sort? Is it one of these “snake oil” devices that are supposed to regulate the voltage, or power factor, to save energy?

You haven’t explained what a PodPoint clamp is and where it is, I can’t see it on your diagram.