I have problems on my local network related to IGMP / Multicast traffic and one of the main culprits appears to be my OpenEVSE unit.

It is connected via WiFi to a dedicated Devolo AP which then connects over powerline to my LAN.

The traffic contributes to the clogging of my network but also swamps the link to the OpenEVSE unit, causing it to become no-responsive on occasions.

The unit is sending anything between 3 and 8 packets a second to the multicast address of 224.0.0.251 with a protocol type of ‘Membership Report group’ according to Wireshark.

Any idea why it is doing this so frequently? Can it be stopped?

There is a group query packet about every two minutes from an IGMP proxy on the router but presumably that would elicit only one response from the OpenEVSE, not several hundred?

This is mDNS, this is what allows a local DNS lookup for the host name openevse-xxxx.local/ or openevse-xxx/ to work when loading the UI. We will have to investigate further to check if that is normal rate or not. I’ve not heard of it causing an issue before with regard to causing the interface to become unresponsive. This could be a different issue; what is your WiFi RSSI as displayed via hte UI?

Have you got an example of the packet capture you could post to help us investigate?

I’ve got a screen shot from Wireshark which I’ll try and work out how to upload.

I’ll try and work out how to upload.

in the row across the top of the box you type in.

I’ve got a screen shot from Wireshark

If it is in the paste buffer, just ‘paste’ into a message.

And the setup to get that output from WireShark will help Glyn replicate the issue. 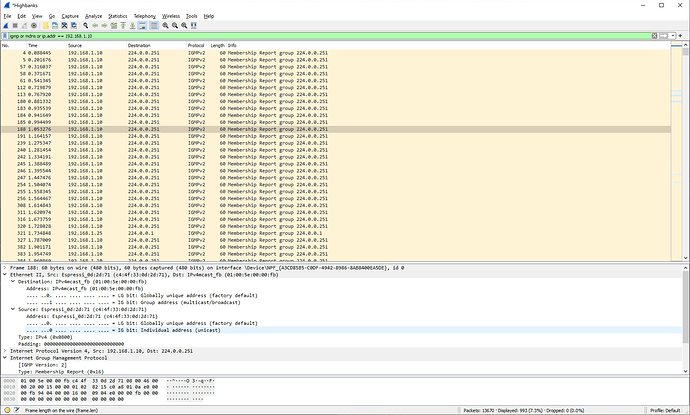