One of three EmonTX freezing or locking-up (stops updating)

Hello! I have three EmonTx V3, each monitoring a different incoming phase. Each one of them is powered by a 9V AC-AC adapter on the respective phase, and has a single CT plugged in. The AC adapter reads 12.2 V on my multi-meter when not loaded, which seems right within expectations

Of the three units, I’ve noticed that one of them is stops updating every now and then, no new values show-up on the EmonCMS runing on EmonPI, and no lights flash in the unit. I have to cycle power to get it to update again.

I’ve pasted below a couple of graph screenshots showing the two most recent lock-ups.

What you as next steps to try to troubleshoot the source of this problem? (although given that this seems to take a few days to happen, it may be a while before I see it locked-up again) 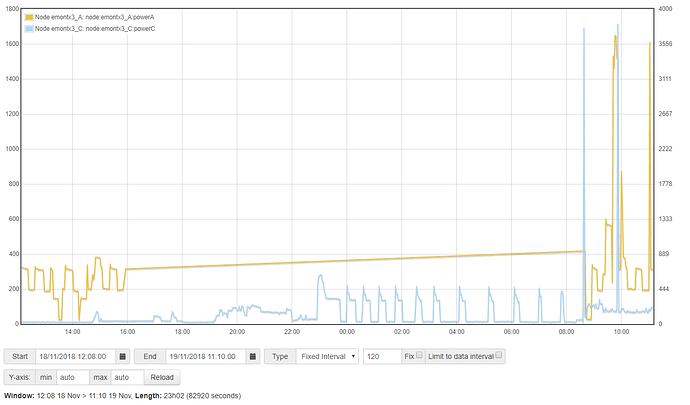 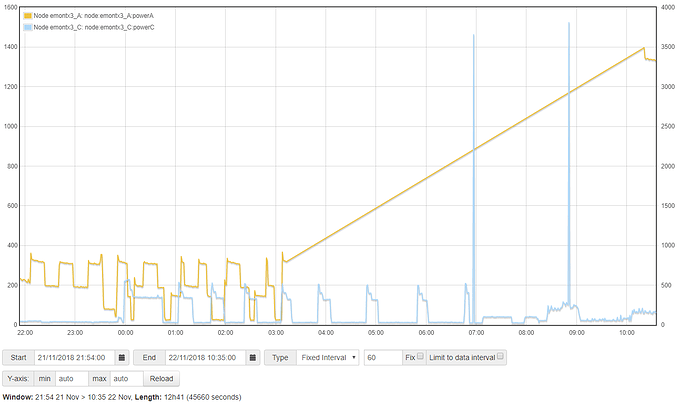 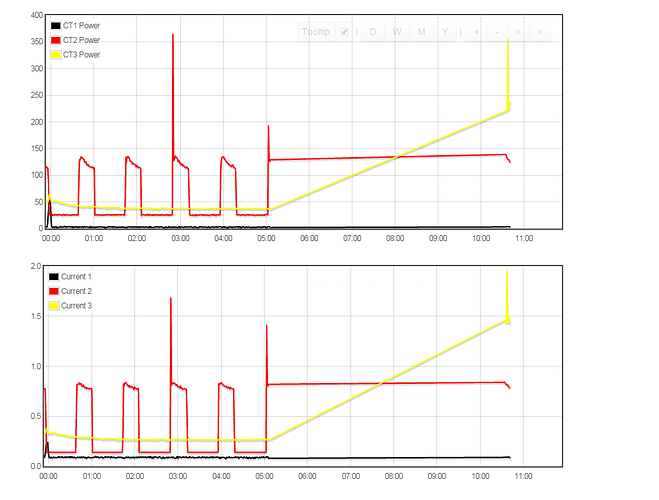 The above screenshots have been taken in 2015. So, it’s not something new. I have a 3 phases system with one emontx. Data are sent to a Raspberry Pi a few meters away.

I don’t really have a solution for you. It’s more a workaround. On the Pi, I am running a script that checks every 10 minutes if the log file has been updated. If not, I kick the command “sudo service emonhub restart”. It works in 99% of the cases. For the remaining 1%, I do a manual OFF/ON.
If you are interested, I can make a research in my files how I did that some years ago.

One thing I noticed compared with your screenshots: it happens when the fridge starts. There is a huge inrush current but I don’t know if both are related.

no lights flash in the unit

I presume you are referring there to the emonTx. My first suspicion would be that the RFM module (if @daturach’s observation is correct) is locking up. It cannot be the emonPi because that continues to receive data from the second emonTx.

One suggestion would be to power the failing emonTx by batteries or a 5 V USB supply - my thinking is the inrush is dropping the mains voltage enough to dip the 3.3 V regulated supply in the emonTx, and in that case I have known the emonTx not to recover. I think that’s more likely with the V3.4.2 than with the V3.4.4.

It looks as if @daturach’s problem was in the emonPi. It could still be the same problem in that the RFM module is locking up yet the RPi continues to run.

Q: to make it absolutely clear, there is no problem in powering the EmonTX simultaneously from the USB 5V port and the AC voltage sensing input, correct?

Also, the other thing I may try is to switch this particular unit that is locking with one of the other two. The phase where this TX is connected is the most loaded of the three, and so it makes sense that the voltage drop would be higher due to bigger current spikes.

I’ll make some experiments here and report back …

there is no problem in powering the EmonTX simultaneously from the USB 5V port and the AC voltage sensing input, correct?

You don’t actually use the two feeds simultaneously. There’s a jumper on the p.c.b. edge right next to the battery holder - it’s recommended that you remove this when using the USB power. (I often forget, and nothing bad seems to have happened so far…) It still leaves the a.c. connected for measuring.

@Robert.Wall
I have looked at other data when I knew the Pi stopped functioning. See below. At around 1.45, there is no surge recorded but the Pi crashes. It is possible that nothing was recorded because that happend somewhere in between 2 values (20 secs). The good thing is that at the next hour, the script restarts the emonhub service and everything works as before.

In my case, I could try to power the RFM module with a separate battery. Will see what I can do next.

I have no proof that this is the case, but when testing the emonTx a.c. adapter supply, I found that it could lock up and not recover, even though the power rail voltage had returned to normal.