Given the steady climb of Octopus Agile pricing this summer, I’ve taken the plunge and moved to the Octopus Tesla tariff. Gone is the time based pricing, and now I get the same value for export as I do for import (11 p/kWh). It strikes me that my annual cost will be the difference between my solar generation and use, plus charge/discharge losses of the powerwall.

Octopus make money/sustainability by taking control of my powerwall and using it as a mini grid balancer. I’m looking forward to keeping an eye on their activity with my OEM setup!

I’ve had a powerwall and solar since March 2020, so did a quick model for what the telsa tariff would have cost me (standing charge not included). Below is the monthly balance: 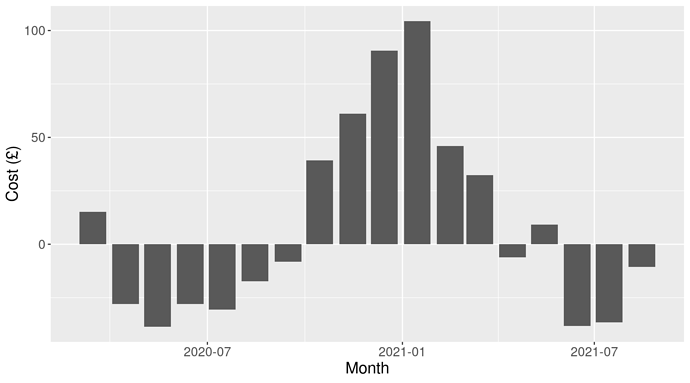 And here is the cumulative cost over time: 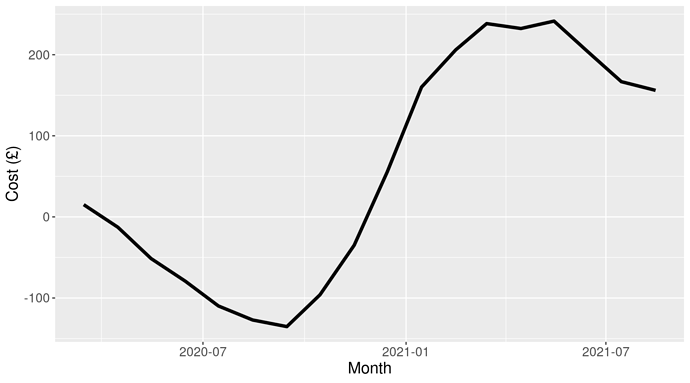 March 2020 to March 2021 is about £240 of cost. I’ve an all electric house (heat pump, induction hob, etc.), and bought an EV in the spring. This will change my electric use, but I think the biggest use will remain space heating (10-30 kWh/day for ~6 months of the year) as we cycle most places. This space heating need is the reason I’m trying the tesla tariff instead of an EV specific one. Cheap electric in the night isn’t much use if I want a warm house at tea time.

Thanks for sharing @miker, that’s an amazingly low rate, looks like 12p import and 12p export for our area!

Yesterday was the first day of the powerwall being controlled by Octopus. Below is a shot of the action from the battery/solar monitor. The darker orange/red is charging from the grid, with the darker yellow/tan colour the discharge to the grid. 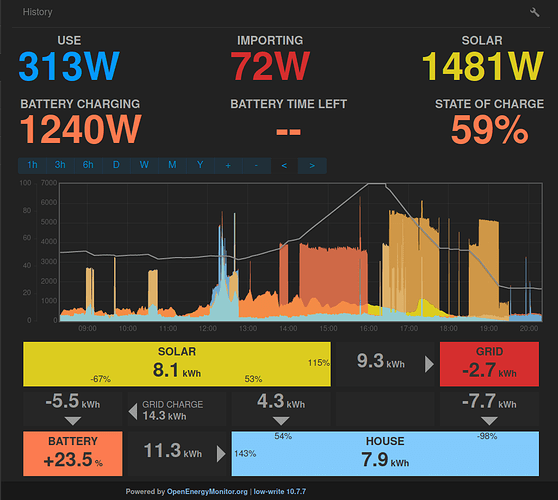 When I’ve got more data I’ll plot up charge/discharge/etc. each day.

Love the idea of this tariff, paying you back the same rate for generation as supply. Would save me the headache of trying to manage all my device usage when the sun comes up.

Unfortunately I don’t qualify as my energy usage and solar generation is too large. Although it is 3 phase, so if I divided it by 3 I would just fit within the parameters. Oh and the small issue that I haven’t yet pulled the trigger on 3 Powerwalls!

That is very interesting. I went for the Octopus GO tariff a year ago now (fixed 5p/kWh 12:30am-4:30am, ~15p other times) so that I could schedule Powerwall and car charging during the cheap 4 hour period overnight using Home Assistant, when necessary. But that has become increasingly difficult to do due to Tesla making it harder and harder to let you schedule control over your powerwall yourself

So I am very interested in this development, thanks for being the guinea pig

@miker is that the standard My Solar Battery app, or have you modified it? Either way, do you think it is showing the graphs/reporting the numbers correctly? I only ask because I modified the standard app to try and show DIVERT to my myenergi zappi and eddi, and I know how hard it is to get the calcs right (I haven’t managed it totally yet!).

A couple of observations:

These things have to be balanced with the “joy” of no longer needing to time/schedule appliances though! I certainly envy you that!

I’m still trying to get my head around this properly, but it seems that the beauty of the symmetrical pricing is that it doesn’t matter how or when you use your energy, or indeed how good their algorithms are (or aren’t!).

As you have said, the bottom line seems to be that you will pay for the balance of (used - exported) over the year, or get paid if exported > used, minus the battery’s hysteresis losses, and standing charges.

I generate more from solar PV than I use, so it’s feasible that my electricity bill could be negative??!! I expect there is a clause in the contract that denies this though

Don’t forget you lose the export part of your Feed in Tariff - mine is not metered so it’s nominal 50% of generation. For me it is worth around £200/year.

Also, over 15 months my Powerwall has charged approx 3,000 kWh and discharged 2,440 kWh, which makes it about 81% efficient if the measurements are accurate. This means that you are actually paying 15p/kWh when the Powerwall is charged from the grid, rather than 12p, but still only receiving 12p when it discharges to the grid. Which means the more Octopus makes use of your battery to supplement the grid, the more financially detrimental it is to you

I only got my panels last year, so was never eligible for a feed in tariff.

I’m not overly worried about the battery, the use isn’t that different to a car and they seem to cope OK. 20% is reserved for backup and come winter we cycle that deep anyway.

It’s the standard my battery app - I think it’s about right. It’s taking solar and battery data from the powerwall api.

It’s definitely nice not thinking about time of use anymore. Although as a courtesy we’re not charging our car at tea time.

The Conversation had an article about energy pricing, and who is affected the most: Electricity prices have reached record highs – and the time-poor could suffer most (hint - those least able to afford it).

The Agile pricing has gone bonkers of late - most of the day at 35 p/kWh. That will be painful come winter - a big reason I switched.