I have a emonTx installed in my meter box (connected to emonPi inside the house via RF). Looking at the graphs, there seems to be a lot of noise or crosstalk. Just wondering if this was common and what the cause might be. Things I can think of are crosstalk between the mains cables, between the sense wires from the CT’s, or coupling between the CT sense cable and a mains cable. Or something else entirely.

Just wondering if there is a ‘best practice’ on how to arrange the CT’s and the sense cables to avoid this?

Also, the yellow line in the graph, there is nothing drawing current on that circuit yet it shows largish negative power readings (works fine when there is a real load turned on). The blue line shows close to zero when no load is active. 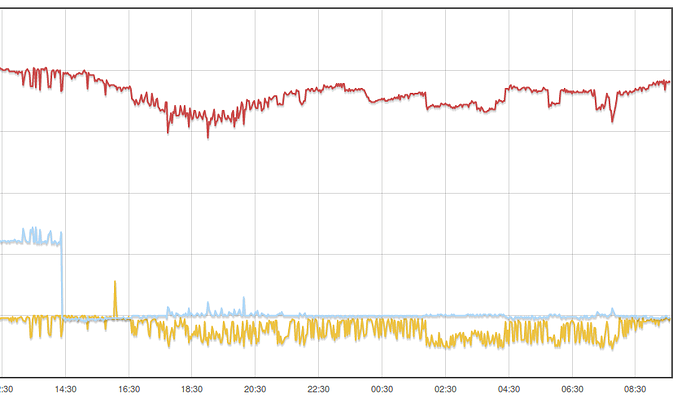 Front and back of install in these photos: 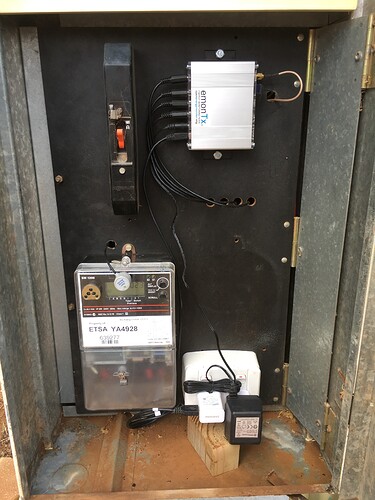 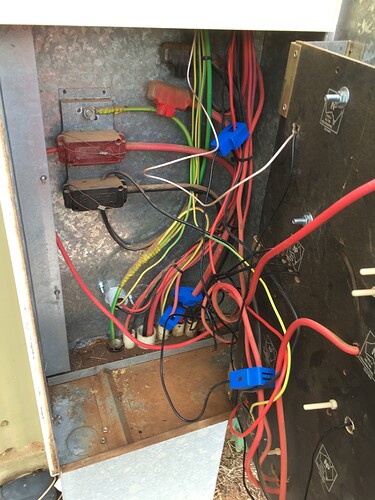 What is the vertical scale on that graph?

And what are you monitoring? I don’t know the details of your supply system, but that looks like a single phase supply feeding a fuse and neutral link, then there’s a meter and a circuit breaker. Yet you have 4 CTs visible.

You could have crosstalk from an adjacent cable - the CT report I did gives some values for that. The secondary cable from the CT to the plug is screened, but there’s no intentional connection to the screen, so it does little good. I doubt there’s much capacitive pickup there, as it’s working into a low impedance (22 Ω), and the loop area is small and the cores are twisted, so magnetic induction is unlikely. You could be getting capacitive pickup from its own cable to the secondary winding of the CT, you could reduce, if not eliminate, that by putting the CT on the neutral instead (of course, the neutral mustn’t must not be shared, nor earthed downstream).

But without knowing the magnitude of the current/power that you’re seeing, it’s hard to say what the cause might be.

The vertical scale is 50W per graduation, so the red graph is just under 200W. So the magnitude of the noise on yellow, and the fact that it’s negative is a puzzle. What made me think some sort of cross talk is the fact that there seems to be some correlation to some steps in the red signal (one separate circuit) to the yellow (another circuit).

There are 4 sub circuits (breakers on the front of the board. I’ll try routing the CT wires away from the mains wires (without moving the mains or CT’s) and see if there is a difference.

There are 2 more (main and sub) boards inside the house fed from this main outside board. There will be 1 emonPi and 2 emonTx at the main board and a emonTx at a small sub board inside too.

I would think that is not unexpected, on an input having a maximum of 24 kW.

You might improve it by moving the yellow CT away from the red cable, if it is close.

Just tidied up the CT wires and mains wires a bit (not easy to keep then too separate) but the effect was very clear: 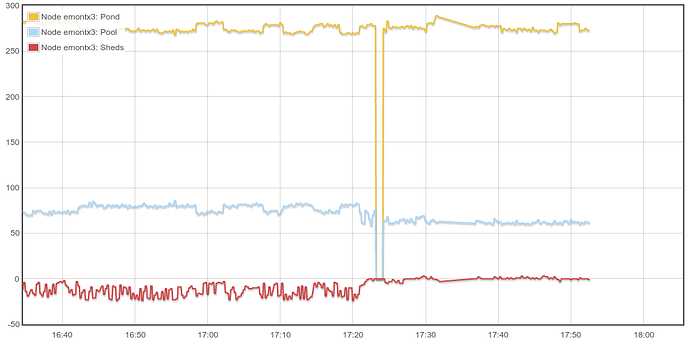 The noise on the “shed” load (now the lower read one) came (up) to zero (no loads) so there was definitely some cross talk there somewhere.

When I get a chance I’ll run the CT cables again and keep them well clear of mains cables. At the moment they are est effort, and bundled together, so I guess that shows the issue was not BETWEEN the CT cables. Makes sense as they are smaller signals, so the source of the interference is likely one of the mains cables.

Still surprising given the CT cables are twisted and any induced current should be cancelled to a large extent.