I just upgrade emonpi from an old image to the lastest. I was running vlow-write-v8.5.
Here is what I did :

But my old custom nodes are not there any more and inputs (emonpi ones) did lost their process list.

Digging a little bit, emonhub.conf did not contain my specific config. And there is an emonhub.conf which is desperately empty.

What did I missed ?

This definitely needs a warning in the import script or an option to use the existing file.

I did that and copied over emoncms.conf which seems to contains inputs, process lists and feeds but still, my inputs and their process do not appear. How is this emoncms.conf file supposed to be used ?

By the way, the “Node” page has been removed from version 9 ?

Thanks for your help
JS

I will make this clearer in the import documentation. Re-building your input processing is a regrettable one time operation. Going forward in the future with Emoncms V9 your import processing will be fully migratable and backed up using the Backup Module in the future.

Rebuilding inout processes will not be an issue, I don’t have that many inputs. But, creating them, can I make sure the very same feed will be populated ? Can I specify the feed number ?

If not, can I upgrage my emoncms v8.6 to v9, export, install new SD image, import ? A bit tricky… but would that work ?

Thing is… I would like to continue to populate existing feeds so that I have historical data.

Rebuilding input processes will not be an issue, I don’t have that many inputs. But, creating them, can I make sure the very same feed will be populated ? Can I specify the feed number ?

Yes sure, logging to existing feed is not a problem. When logging the Input to a Feed instead of click on the drop down menu underneath ‘Create New’, this will display your existing feeds. Just select the desired feed. Eg. 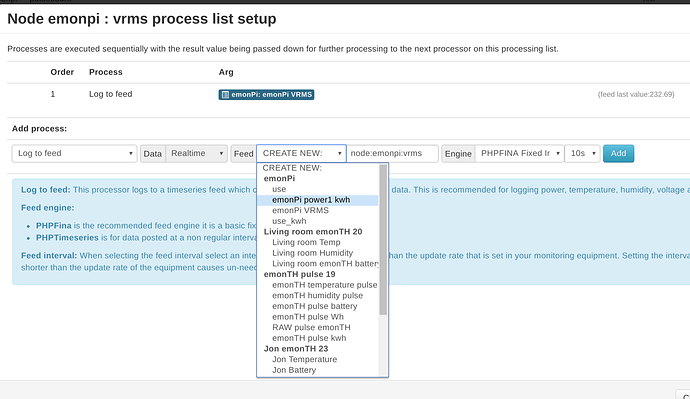 Ah…ok… as simple as that…

I’ll try to migrate today then !

Thanks for your help.
JS

Emoncms is now running with the new image.

And it is now back online

Thanks for your help.
JS