To replicate the above;

That Sir, is epic. Consider it installed and running!

Keep up the good work!

Paul,
Can you explain a bit how the today value’s are calculated?
I see you get the value’s with the http request. What feed type is behind this?

Is this a kwh/d or accumulating kwh feed?

Thank you for sharing!

Just seen that v0.14.4 of NodeRed has been released, which now allows the ‘official’ version of NodeRed Dashboard to function.

Nick O’Leary has posted that ‘The first release of Node-RED Dashboard, the successor to the contrib-ui module, should follow by the end of next week’

4 posts were split to a new topic: Updating node-red

Just found the below tweet from Lawrence Griffiths who has been developing a node-red ui dashboard for a boiler project.

There’s a lot of potential here… 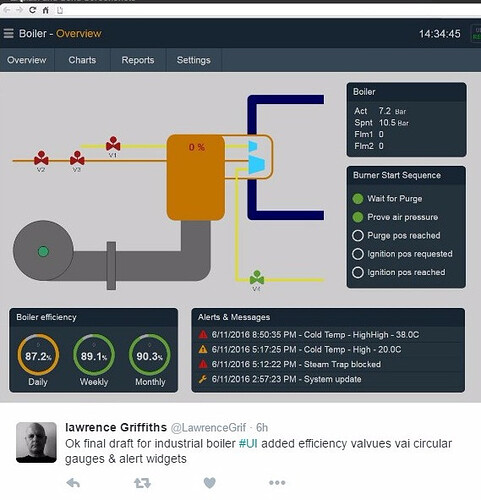 The official node-red-dashboard was pushed to npm late last night, and is now available to npm install (needs node-red v14.x).
If you have node-red-contrib-ui installed, don’t forget to uninstall it first, before installing node-red-dashboards

I may be searching the wrong way:

If you weren’t using contrib-ui or you are on a clean install:

Open your Node-RED instance and you should have UI nodes available in the palette and a new dashboard tab in right side panel.
The UI interface is available at http://localhost:1880/ui (if default Node-RED settings are used).

Did you try this?

Well, in short, I got fed up of waiting for the Rasbian team to update their repo, so I installed it via npm which immediately gave me v14. Also, for some reason node.js doesn’t seem to be getting updated either, as the Jessie version is v0.10.x whilst the current version is v4.4.7 so I updated that too.

It seems the raspbian team have indeed finally updated to 0.14.
Took them quite a while.

There are a number of improvements with the new node-red-dashboard over the ‘contrib’ version, including;

Plus lots more, with promises of more to come.

Here’s a screenshot of the ‘dark theme’ from my ipad. 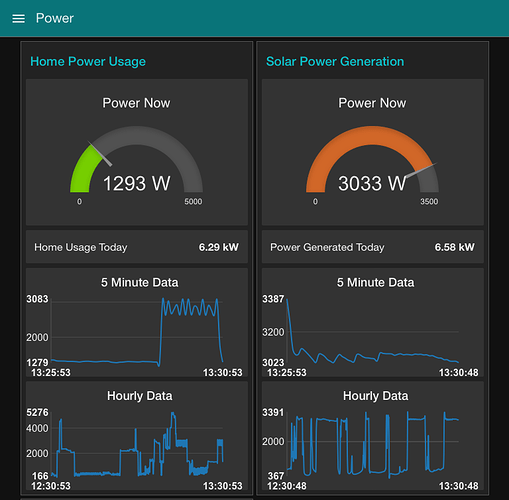 @Paul - I finally bit the bullet and did the upgrade. BUT it didn’t go as well as expected. Ugh! Node-RED does not start on a reboot.

So my questions is - what is it that causes node-red to start? I am guessing it is something service runner based but I cannot locate it!

Found it! The nodered.service file was missing from the /lib/systemd/system directory. I grabbed a copy from a full backup then did:

Now I need to find what sudo systemctl enable … does and why my nodered.service disappeared!

Following removal of the apt-get version & installation of the npm version, I just ran it by node-red-start and it it has run fine since, surviving a number of reboots, and I didn’t have to re-enable the service, which surprised me, because I assumed that it would have been disabled automatically after removing the original node-red version.
(sudo systemctl enable nodered.service instructs systemd to enable Node-RED to run automatically at every boot and upon crashes.)

The link which I provided above;

…has a section on ‘autostart’ and provides all of the necessary scripts to re-install the node-red systemd autostart, if needed.

Paul - I finally got everything updated and running with node-red v0.14.6, npm and node.js!

And I’ve installed node-red-dashboard. I had not downloaded or used node-red-contrib-ui.

I’ve created lots of simple example flows trying to get an understanding of the node-red dashboard. 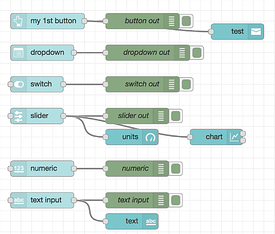 I downloaded the node-red flow example from the 2nd post (above) and I am having problems getting things to work. It looks like it was written for the node-red-contrib-ui.

Thank you for your help! Jon

Yes, sure. There are a number of minor differences to the flow.
I’m going to password protect the dashboard in a week or so, but for now it can be seen at this url.