A new widget has just been added to the emoncms dashboard which is useful for displaying temperatures; 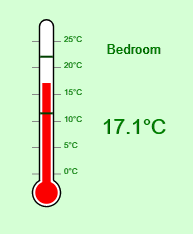 Many thanks to Aymeric Thibaut for submitting.

To update your dashboard;
Emonpi’s - run the inbuilt update script after after the release of the next dashboard version (currently v1.0.1).
Self-Builds - run $git pull from within your emoncms/Modules/dashboard directory

Looking forward to it being available!

Im using emoncms on ubuntu 16.04.
Browser is IE 11, deleting Browser Cache and resetting the browser will not work.

What can i do?

What do you see in your browser’s developers tools (F12?) when the error is present, and is there anything showing in your emoncms log?
Have you tried a different browser to fully eliminate any caching problems.

F12 from Browser i will append screenshots. 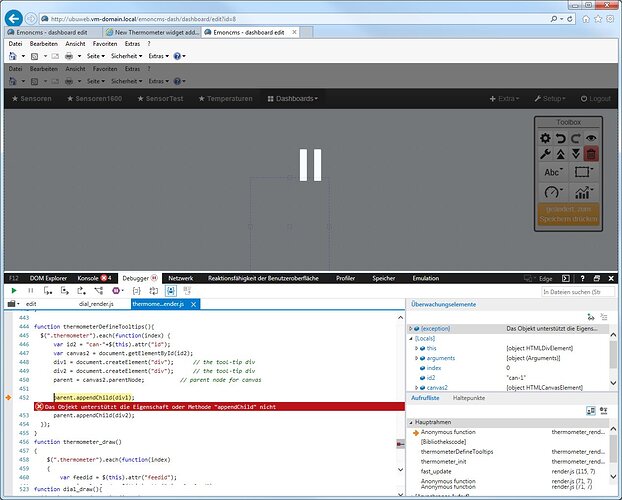 Thanks, so in English, is that;

“The object does not support the appendChild property or method”

Yes, it seems that is not a Problem from the Thermometer widget, also dial widget uses appendChild, that is also no longer working.

Looking forward to it being available!

@glyn.hudson
Ive just updated to the ‘origin/emon-pi-develop’ branch, will that overwrite the changes that I’m testing (Crashing)

@back2live I’ve just reverted your post, to again show the screenshot, hope that’s ok.
I’ve asked Aymeric, who has been working on the widgets to take a look, and the screenshot may assist him.
Create thermometer_render.js by thib66 · Pull Request #124 · emoncms/dashboard · GitHub

@back2live there was a bug which only affects IE11 users.
Aymeric has kindly submitted a fix, which after testing will be merged into the repo.
See Tooltips improvements by thib66 · Pull Request #128 · emoncms/dashboard · GitHub

@glyn.hudson or I will update this thread when the fix is in place.

On openenergymonitor.org will be such a widget?

Yes.
On the site emoncms.org.
Another battery indicator.

Yes, it will appear in emoncms.org eventually, just takes a little time.

dumb question for sure but what happens when you have freezing temperatures ?? (not in the house I hope but if you have a sensor outside or in a garage )

Not a dumb question!
Yes, the widget can handle negative temperatures, currently by using the offset.

I’m not sure that this is the most intuitive way to handle negative temperatures however, and I’ve asked Aymeric if he would kindly consider adding a ‘min value’ box in the widget settings, and calculating the offset in code.

dumb question for sure

Agree with Paul. Definitely not a dumb question. Below zero temps occur in a large part of the world.
When I lived in northern Montana, I saw winter temps of -20 to -30F on a regular basis…