Following on from my last couple of posts in this series we now have a working continuous cloud-based build & test (firmware compiling) flow using PlatformIO and TravisCI, to quickly recap:

The next step is to get the compiled binary from GitHub-releases (EmonESP in this example) deployed to a WiFi connected production ESP8266. Here’s the user facing EmonESP web-interface for this firmware update process: 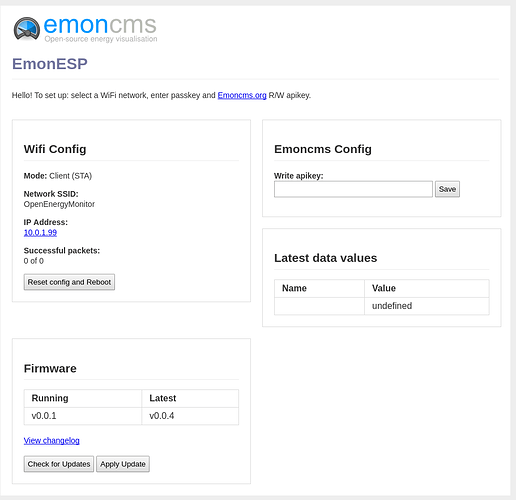 The OTA (over-the-air) firmware deployment process is based on Daniel Eichhorn’s (@squix78) excellent blog post. In summary the process is as follows: 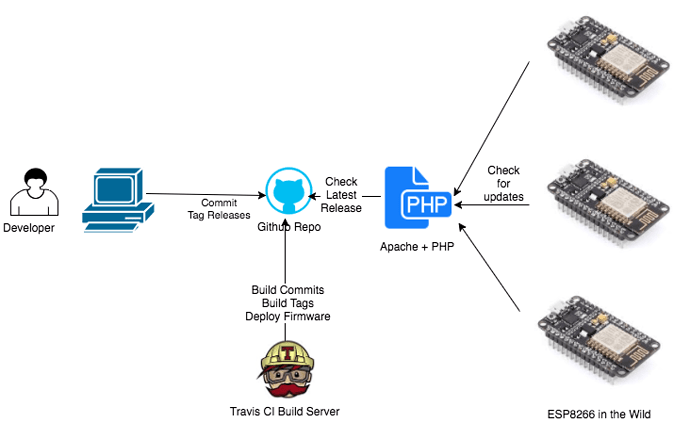 Ideally the production ESP8266 would be able to contact the GitHub-release API directly negating the need for the intermediate PHP script. However, there are a number of reasons why this is not practical at the moment. To quote Daniel’s blog post:

There is currently working example of this process (ESP8266 firmware + intermediate PHP script) in the ota branch of EmonESP GitHub Repo.

In it’s current implementation the update process described above is not secure.

Obviously secure delivery and verification of the update binary is essential.

Ideally the binary download to the ESP would be done over secure https. This maybe be possible, however https support on the ESP is currently not super stable and limited by the available memory (as mentioned above).

I would be interested to hear from anyone with any thoughts / advice as to how secure ESP OTA firmware delivery can be achieved.