I think I found a “feature” on emoncms.org, or I have a setup issue, I like the new history view but it looks like in some cases its not correctly catching export and the direct usage includes the export figure? Example yesterday, 225% direct: 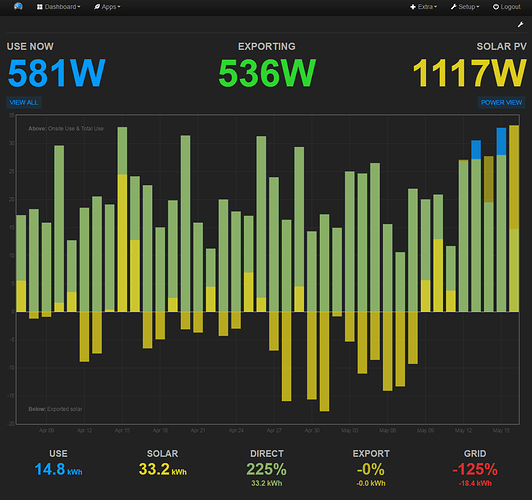 I don’t get the same view on local emoncms on the emonpi though? 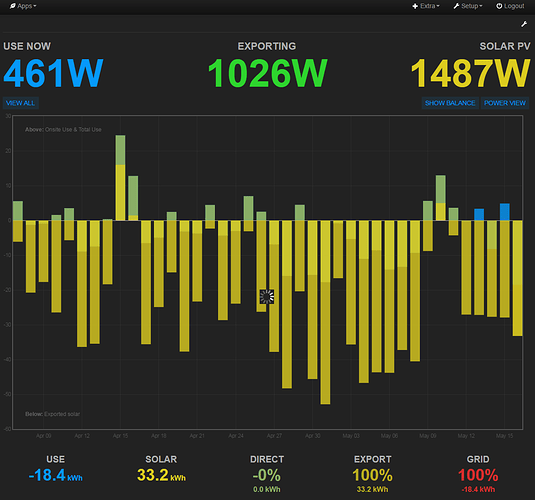 But that says direct 0%, seems strange? local “waterfall” looks more like I expect, showing usage>generation as blue “above the line”.

Could you post your input processing setup for both emoncms.org and emonPi.

I think there could be an error in the emonPi input processing since USE in negative, this should not be the case. See Solar PV - Guide | OpenEnergyMonitor

Ok that makes sense, I can’t get to emonpi at the moment but will check. I have a clamp on the meter tail, and the other on the generation, but I seem to recall I had to do a sum to get house usage as the meter tail includes generation figure (no henley block, think you call it “type 2” in the guide).

Finally got a chance to attack this tonight, started with new card as it happens to get onto May2016 image and cure some other woes, followed the guide to re-setup my feeds from inputs: Solar PV - Guide | OpenEnergyMonitor

Could be cause its a bit late and my brain is tired, but the guide says:

Where should I use the +input, I am guessing this comes under CT2 so I add the (allow positive) CT1 reading to get the house consumption and log to use and use_kwh feed? (what if some of the solar is exporting… that’s not use?)

The screenshot for mysolarpv app is confusing, as it calls the cumulative export “export_kwh” which is not a feed you setup in the guide?

Am I right that somewhere I need to setup an allow negative on CT1 and log to feed for export? How can I combine that with the existing allow positive for the import and import_kwh?

EDIT:
Would “use” not be plower1pluspower2, and can I add an “allow negative” on CT1 after the allow positive and subsequent processing before log to export and export_kwh?

power1pluspower2 is the better way to get “use” as when posting input1 and input2 individually (via mqtt) rather than part of a packet, there is no guarantee that one will always arrive before the other, in fact they will probably be processed simultaneously in separate threads so getting an accurate sum could be tricky.

You do calculate the “export” by using an allow negative on the grid input. If you have already used an allow positive there will be no negative element left in that processing chain, so you will need to reset to input or reset to zero +input to get the full grid value and then apply the allow negative.

Thanks, I went with power1pluspower2 for use as that’s what I had before it seemed, I think where my import/export graph was wrong above was because “import” was on the meter tail without the allow positive in the guide - so I was getting negatives on the import - usage and generation of course looked ok only history was skewed.

Need to sum an emonTx reading in future as well when the new submain to the garage is live, all starting to make sense now.