My Solar (with divert)

@mattjgalloway has been busy creating a new addition to the emoncms apps which may be of interest to users who are diverting surplus power.

It adds ‘My Solar (with divert)’ alongside the existing 3 apps, and the idea is that you can track how much of your solar is going to actually power the house and how much is powering the immersion.

This has now been merged into the app git repo, and users can update by $ git pull from the emoncms/Modules/app directory, or running ‘update’ with a emonpi.

Matt intends to continue development of the app when time permits, and feedback about functionality or aesthetics would be very welcome.

Note: Screenshot below is using sample data - hence the sums don’t add up! 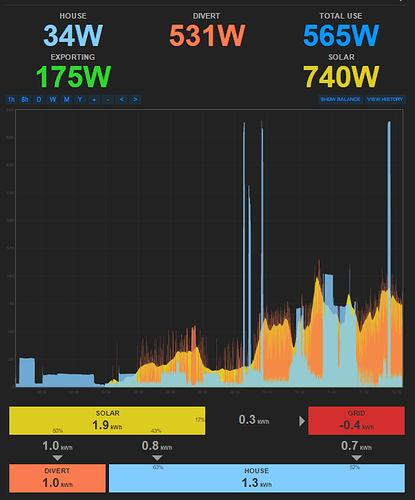 But I am curious. on your image and the meaning of the graph it a bit confusing it says you are exporting 175w is that still how much is going into the grid still even after the diversion ???. or is your diversion element smaller then 1kw and that the limiting factor ?? … even with my non standard way of firing a triac I am getting <0.030 accuracy on kw . ( by your above example I would only be exporting 15 watts and not 175w) or am I misunderstanding the meaning of your graph…

Note: Screenshot below is using sample data - hence the sums don’t add up!

Please try the app with your data, and if the sums are wrong, please let us know.

If you need help with that Stephen, please start a new forum thread.

This is just what I want to set up!
Currently I have no energy monitoring and I’m new to OEM so excuse my ignorance - I assume is the hardware needed for this an EmonPi with a separate EmonTx-based diverter system?

This is just the visualization part, it’s a part of emoncms, currently emoncms.org is running the more established version of “mySolar” that doesn’t have the diverted elements, just use and solar, hopefully in time the two versions will merge, for now you will need your own installation of emoncms to use it.

As for the data behind it, that can come from a multitude of places and be processed in emoncms for presentation as you choose. pretty much any data can be used, but the obvious choice being CT’s, connected to an emonPi or emonTx.

Some users have a 3rd party diverter like iBoost or immersun etc, some have a self-build diverter driven by a emonTx (or an emonPi might do it too, I refer to your other thread there) or they might have a kit by Robin Emley (@calypso_rae) from his site mk2pvrouter.co.uk, some users have written scripts/code that monitor export and automatically switch on appliances etc using that info, even running out to the garage and turning on the clothes dryer when the sun comes out is a form of diverting.

Once you have an separate measure of the diverted load(s) this app can then display that data in a standard way or you can create your own dashboards in emoncms, think of this as a ready to go pre-made “just add data” dashboard.

The conversation about hardware and your options for getting the data to emoncms should remain in your other thread, this thread’s discussion is specific to this app as a form of presentation.

Many thanks for your advice

I’ve started using this app now that my mk2PVrouter is up and running. It all looks very good, so thanks Matt for all the effort put into it.

I have a little local difficulty in configuring the app relating to the feeds that I have available here.

It looks like the My Solar (with Divert) app expects its HousePower data input to be the sum of real appliances plus diverted excess. But I don’t have an easy possibility to place my CT on such a point because of the positioning of Henley blocks and so on.

I did discover the possibility in emonCMS to create a “virtual feed” being the sum of my appliances_power and divertedpower inputs. But when I go to the My Solar (with Divert) app setup, I don’t see my virtual feed in the dropdown lists. 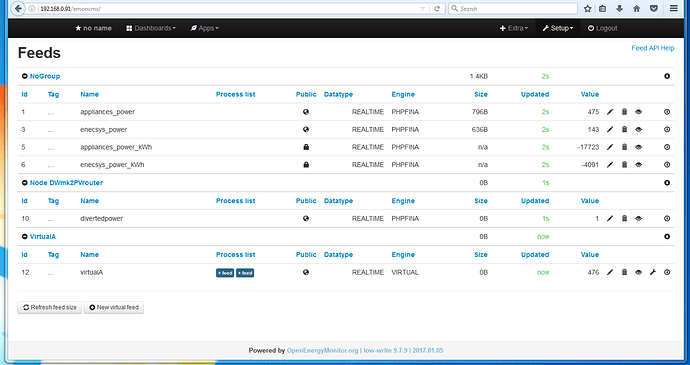 Am I missing a trick or is there another way of achieving a setup.

Many thanks for your help, Cheers, David.