Monitoring only the output from solar panels

I’ve recently bought a house, which has solar panels that were installed by the previous owner. All the wires to/from the consumer unit are neatly boxed in or concealed in the walls, so at present I wouldn’t be able to attach CT sensors to any part of the system. I will probably have some electrical work done on the house in the next year or two, and when this goes ahead I will ask the electricians to leave enough cable exposed near the meter so that I can attach some CT sensors.

In the meantime, can I get started with Open Energy Monitor by using the IrDA data from the Elster A100C generation meter as the only input? If so, am I right in thinking that the only equipment needed is an emonBase system (installed next to the broadband router where there is a power supply), and an emonTx v3 with TSL261R IR sensor kit (installed next to the meter, and running on batteries as there is no plug socket)?

The house also has an Immersun system. The Immersun controller’s LED changes from orange to green to show when there is enough solar power being generated to run the immersion heater. At the moment, this is my only way of knowing whether the house is importing or exporting electricity. Has anyone experimented with using this indicator as an input to Open Energy Monitor?

Are you sure that there are no exposed access to the meter tails anywhere? You can use several clamps with a emontx v3 I believe to detect if your exporting or importing - look at the picture on the EmonTX shop page for example of what I mean.

The other option is to get the clamps inside the consumer unit, this is not ideal but in some cases the only option (I had exposed tail from generation meter for 1 CT on my Emonpi, but the other had to go inside the CU to get to the tail to the meter and detect total house usage).

Depending on the output of the PV installation and how and where it is connected into your installation, it might be possible to use a smaller ring-core CT.

Also, you might want to consider one of our PV diverter designs to replace the proprietary unit, as I’ve heard about a number of people who’ve done so and been favourably impressed by what they see as superior performance.

Robert do you have a link to details of how the propriety one performs better? I am just looking at the moment to capture the behavoir of our iBoost+ into Emoncms and saw references to this but no real data - iBoost+ and Immersun seem to both work well from my/friends experience.

I didn’t say the proprietary one performs better, I said there are some that say the opposite. Sorry, I haven’t got a link to hand.

In the meantime, can I get started with Open Energy Monitor by using the IrDA data from the Elster A100C generation meter as the only input? If so, am I right in thinking that the only equipment needed is an emonBase system (installed next to the broadband router where there is a power supply), and an emonTx v3 with TSL261R IR sensor kit (installed next to the meter, and running on batteries as there is no plug socket)?

I have no experience of this, but there is a thread on the old forums with a link to the original Arduino build and a version ported to an emonTx V2. Updating that to the V3 is a matter of redefining some I/O and the radio module (if you use it). [Somewhere, I’ve got a comprehensive list of all the corresponding bits for the various versions!]

One caution: I’ve no idea what battery life you might expect, this is something to look into. At a quick look at the code, it appears to run continuously looking for pulses, so battery life might be a concern.

Here’s the meter and consumer unit: 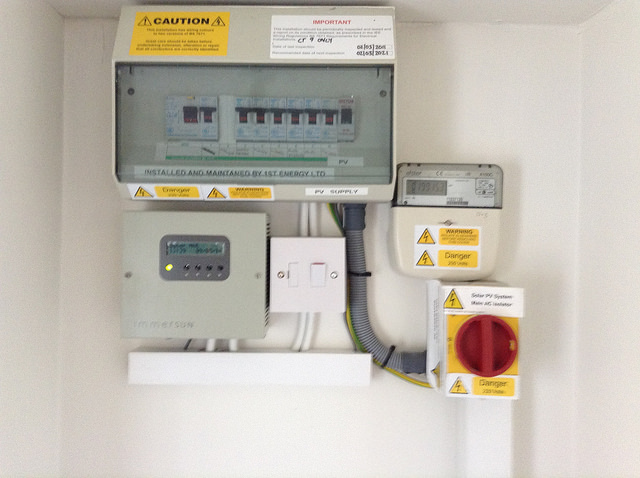 The external meter box is on the other side of this wall, so the cable probably goes straight into the back of the consumer unit. It might be possible to fit the CT sensor inside the consumer unit, but I’m not confident doing it myself and I was hoping that I could get started with Open Energy Monitor without having to get an electrician to install it. That’s why I was hoping to be able to work solely from the IrDA output.

I see your problem now!

Yes opening CU not ideal, in fact my clamp was fitted by the electrician wiring up the PV when they had it all turned off.

I think you will find the cable before the isolator is twin~earth so you can’t clamp around that, after the isolator into the generation meter will be single cables, as will the run into the CU from the meter I suspect but that grey flex conduit is not a great help to get a clamp on either.

If you go opto-counting from the main meter, this will tell you consumption but not export as the optical counting just stops flashing (goes solid red on mine) when exporting. So you can count what is used, but you would not be able to record your export - it does get you started.

Side note: I like that they put the Immersun next to CU, I never thought of that, they put my iBoost+ in the airing cupboard which is a right pain to view the screen on (I don’t have the optional remote display). I did not think of that, I guess they took the entire immersion feed (usually a dedicated breaker) as the new output from the immersun - at least you can read your display!

I would say your best option would be to get an electrician (or maybe the PV guys to stop next time they are passing and “help you out installing a monitor”) and get them to put a socket on the wall as a spur of a ring circuit, and put the CT clamps inside the Consumer Unit (sorry realise this is not the answer you were looking for).

Have you considered one EmonPi mounted on the wall - rather than an Emon TX and Emon base?

Your meter looks like it has an optical pulse LED - so you can stick on a pulse counter and use that. As it’s pulse-per-Wh (1,000 pulses per kWh) the granularity of detail is not great but it works (I have similar but on a different generation meter) and it is also calibrated to what you are metered to generate.

Then later, as you suggest, you can get CTs installed by an electrician and use those for more real time usage info.

Thanks to everyone who replied with advice. I decided to put off buying the EmonPi until I could get it installed properly and use the two CT sensors as intended.

The EmonPi arrived this morning. It’s set up and happily logging the temperature to EmonCMS while I wait for the electrician to install the CT sensors.