I am a newbie and was just hoping someone could confirm my proposed system sounds workable.

I want to monitor what my solar panels are generating, what my car charger is consuming and what the house is consuming. I believe I can do this with an emonTx with battery pack fitted inside the meter cabinet, 3 CT sensors and an emonBase to upload to emonCMS, using the 3 CTs as follows:

In the diagram the solar and car charger cables are the two thick black cables circled in blue at the bottom. I can’t use these as they contain both the live and neutrals. The red circled cables in the middle I presume are the combination of the car charger and solar supply, merged within the switch box. Without an AC-AC sensor to detect direction I presume I can’t use these either.

Hello Richard, and welcome to the OEM community.

I think you are working along the right lines.

Clearly, you realise that without access to a reference voltage, not only do you lose accuracy but you also cannot know the direction of power flow, and so that’s why you need to measure current where you absolutely know which way the power is going.

I guess you’ve thought about this - there’s no way to get a mains socket fitted inside the meter box?

So yes, as those cables to the car charger and the PV inverter as multicore, you must get inside the Wylex box to fit your c.t’s in there. If we knew some details of the Owl c.t., it might be usable - but most probably it would need a small modification to your emonTx, so unless you’re happy experimenting, I would advise buying the “shop standard” c.t. as you intended anyway. If there isn’t room inside the Wylex box for two c.t’s, you could put an optical pulse sensor on the generation meter instead. The advantage of that is it will be more accurate (because the meter knows the voltage, your emonTx doesn’t) but the disadvantage is the data is historical, because you only know a pulse’s worth of energy has been generated after the event. So when the pulse rate is low, you’ve no idea what’s happening until the next pulse comes along. When you have a c.t, the current is available instantaneously. (But you will get a small reading overnight that will show as generation when it’s actually consumption - the standby current keeping the inverter alive.)

an emonBase to upload to emonCMS

You don’t need to upload to emoncms.org, you will have your own local emonCMS running inside the emonBase. Did you realise that?

The programmer is definitely a good idea. Although strictly speaking you might get away without it, it will allow access to the software should you want to tweak the calibration or upgrade in the future.

And a small but important point: don’t clamp the c.t’s on their cables. The core is ferrite, a very brittle material, and if you exert any pressure on it, it will snap, rendering the c.t useless.

Thanks for the advice Robert. That’s very helpful. Not having to upload to emonCMS is one less nut to crack.

I don’t think there’ll be room for a mains socket inside the meter box once the emonTx is in there, but I could maybe put one alongside, or just have a hole to pass the adaptor lead through from inside the house. I still need everything else I’m putting in whether I use mains or not so I’m going to try without it to start with.

When I say clamped, the Owl sensors have a type of plastic clamp. I see the OEM ones are just a clip. That was all I meant.

I think I’ll get the optical sensor as well. If I don’t use it for the solar I can use it to get total consumption from the meter to compare with the sum of the CT sensors (when net importing). 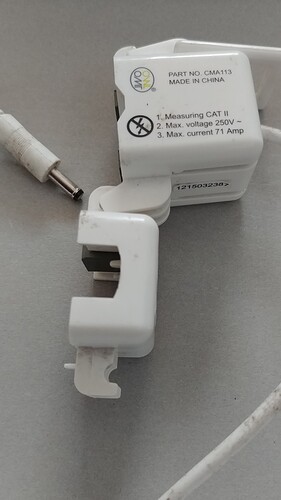 Yes, I saw that too, but there’s nothing useful there - if it gave the secondary current (always assuming there isn’t something silly like a rectifier inside the case) then I’d know if it could be re-purposed.

I think I’ll get the optical sensor as well. If I don’t use it for the solar I can use it to get total consumption from the meter to compare with the sum of the CT sensors (when net importing).

That might well be useful when you’re trying to calibrate - but as I think you realise, it probably won’t count anything when exporting (and if it did, it wouldn’t know how to send out negative pulses!

Hi @richy1995 - I have recently switched from using OWL to emon, primarily because my set up became more complex than OWL could cope with. I’ve had PV for ~5 years, but it was the addition of an EV that precipitated the change. Good luck with your system - & I am sure you will enjoy the additional data that it can produce.