Hi All,
I’m looking to monitor our import and PV generation, maybe other loads as well if there is the opportunity.
So I’m after advice on the best setup to do that.

The main consumer unit has the import meter and various loads that might be worth monitoring, water pump, immersion heater, garage. 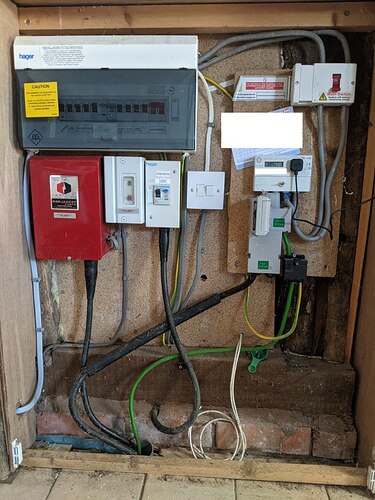 AnnexCU1944×2592 375 KB
There are a couple of two pair wires unterminated near each CU, I have no idea what they were for or the condition of them.

If so do I have to buy both units at the same time or can I get the Pi and add the TX later?

Is there a better way to do it?

located on a granny annex that has it’s own secondary consumer unit about 15-20 meters away.

What is along the 15 - 20 m line between there and the main c.u. (how many walls and their construction, etc)?

I think you’re probably right - I can’t think of a reason why not. But have you got a mains socket at the main c.u, because to measure the direction of power flow as well as for accuracy, both the emonPi and the emonTx need an a.c. mains to measure and get a phase reference from. The flashing LED on your meter most likely doesn’t flash when you’re exporting, so you can’t rely on counting meter pulses.

If so do I have to buy both units at the same time or can I get the Pi and add the TX later?

Unlike commercial firms, no you don’t, you can chop and change, add (and subtract) to your system however and whenever you wish. The only consideration is postage costs. Not mentioned anywhere, we always recommend you buy a programmer as well. It’s not strictly necessary, but it enables you to update and if you wish to customise your gear should you need to, and it makes it a lot easier to investigate should you have a problem.

Is there a better way to do it?

Provided the radio can get through, I can’t immediately think of one. Presumably, the annex is within Wi-Fi or cabled Ethernet range of your router?

I must mention the RJ45 socket on the emonTx is not Ethernet - the emonTx will be talking via the 433 MHz ISM band radio to the emonPi, it’s that which talks Wi-Fi or Ethernet to your router.

Thanks for getting back to me. I’m now the proud owner of emonPi PV bundle

I will get an ​emonTX at a later date.
Quality seems excellent.

Wireless between the two should be OK both WiFi and DECT manage it. Connecting the emonPi to ethernet by the annex CU will be a LOT easier than connecting near to the main CU where the incoming supply is

Is it worth attempting to splice the consumption CT onto the unused “phone?” wire that exists between the two CU or should I just use the second CT to monitor the consumption in the annex? My assumption is that splicing into an unknown cable is likely to introduce unacceptable signal loss…? I’ve yet to try it but I doubt I’d be able to use the old wire as a draw line for something more suitable…

Is it worth attempting to splice the consumption CT onto the unused “phone?” wire that exists between the two CU or should I just use the second CT to monitor the consumption in the annex?

If you’re measuring voltage and current and using both of those in the emonPi or both in the emonTx, you can measure the direction of power flow. If you multiply voltage and current anywhere else (i.e. in emonCMS to get apparent power), you don’t know the direction of power flow. So what you need to do is draw yourself a simple single-line diagram showing your main incoming feed, your main C.U, where all your house loads are connected, where the annex feed goes from and where it arrives in the annex, and repeat for the annex, especially showing the PV infeed. If you only want the annex consumption, you can measure it that end - you’re in effect doing a standard PV installation but you’re treating the annex as a “whole house”.

Then when you get the emonTx, you’ll set up the whole house much the same but treat the annex feed as if it were just the PV in terms of measuring (except you won’t need to measure it again in the house - you already have that in the annex), and you’ll do the sums in emonCMS to give you the individual or total consumption values to want.

But if, in the interim, you want the emonPi in the annex to measure the main incoming power at the meter, then yes, you do need to press a spare pair (of Ethernet/phone) into service for the c.t. Remember, the c.t. is a current source so unless you have a stupid voltage drop (at the 50 mA max that it generates) you don’t lose signal, a current source will generate whatever voltage it takes within its power rating to force the current.

I wouldn’t try pulling too hard. If it’s only temporary until you get the emonTx, I’d check the spare wires are unused, and if they are and they have continuity, use them. If there’s 25 m of wire, and it’s CAT 5, then the loop resistance is under 5 Ω (c.f. a 22 Ω burden) and standard 'phone wiring is much the same, so it’s adding 25% to the power the c.t. needs to provide - not something I’d worry about unless you’re running 25 kW loads!

If there is a hard-wired phone circuit in the same cable, you might get a bit of hum on the phone, because you’re only supposed to send -10 dBm (at 600 Ω), that’s about 250 mV. But even that represents a 4 kW load that the c.t. is measuring, so I don’t expect a problem.

Apologies, it was just an interim option I was thinking about.

For reasons unknown the previous owner of the house put two bare 4 core phone cables, right next to the CU’s, nothing at all connected to them.

I think for now I’ll mount the emonPi in the annex and just connect one of the CT’s to the PV infeed. Keeping track of the generation is most important for now and then I’ll add the emonTX, to monitor import and big loads, once I’ve got my head around things.

Thanks again for your quick and detailed responses.