I’m looking for a very basic setup and have the following components.

I’ve built the EmonCMS and got it working on a RPI 3 just fine, and I was hoping I could just connect an optical sensor to the RJ45 jack in 2 locations.

My solar meter is in my basement next to the inverters. It is an Itron CL200 and I i confirmed it has a pulsing LED on top. 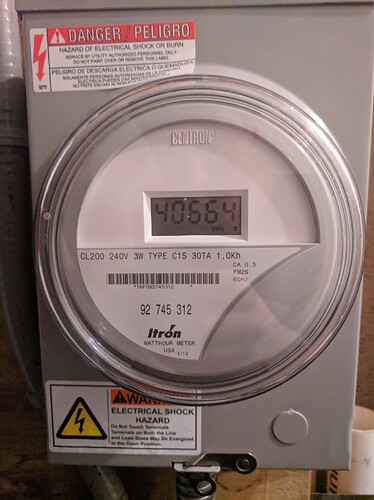 My net meter is outside (other side of the house) and is a GE Kv2c and again has a pulsing led.

My basic requirement is to just monitor both of these with optical pulse sensors; not looking to use CTs at this time.

Can I do that with just 2 raspberry pi 3’s talking over wifi and the pulse sensors or do I need to buy an emonpi (and / or other things?)

Down the road I might want to also tap into the api and figure out how to log my natural gas meter. It is an itron of some sort and I’ve been able to capture the rf signal for my unit with an rtl-sdr dongle and rtlamr.

The first comment I must make is this: Your Grid meter will most likely not show how much energy you are exporting. I have not read the meter manual, but most meters only pulse the LED when importing.

See this Directly connecting to Optical Pulse Counter with RPi? for connecting the optical pulse sensors to your Raspberry Pi.

A minor correction to what @pb66 has written there: “The pulse counters are just a logic level switch, it just translates the light pulses to a distinct on or off signal.” That is not quite accurate, it is actually an analogue signal that you can see changing slowly at very low light levels. But that should not affect normal use and you will get a clean pulse.
But you cannot connect to the RPi’s RJ45 socket - that is strictly Ethernet only. You must do as Paul has written and connect to the GPIO pins.
(On the EmonPi, there are two RJ45 connectors - one is Ethernet and the second is for the pulse and temperature sensors. Those sensors are not Ethernet although we use the same connector.)

If your gas meter has a pulse output (via a magnetic reed switch perhaps), you could count pulses from that too.

Your Grid meter will most likely not show how much energy you are exporting.

Indeed it may not. But since the KV2C is a bi-directional, i.e “net” meter, it might be configured to indicate export as well as import via the IR port.

Ironically enough, after I installed my PV system, my energy supplier replaced an Itron similar to the one in the pic above) with a KV2C.

So that thread about directly connecting, once I do that and wire to the gpio headers, I need to run some sort of daemon or similar to feed the data to the CMS?

So that thread about directly connecting, once I do that and wire to the gpio headers, I need to run some sort of daemon or similar to feed the data to the CMS?

There is a script in the second post of thread that will get you started. That script posts to an emonhub socket, when it was originally written it was started as one of several scripts and before systemd in Jessie, but a simple service unit could be used to start and manage ir as a daemon yes.

I develop many of these little scripts that post to emonhub sockets as an initial step towards creating a bespoke emonhub interfacer. hopefully this will become an interfacer one day so that users can add a number of pulsecounters to a Pi with just a few connections and a edit of the emonhub.conf.

Just got my optical sensors and indeed there are pulses occuring while the meter is running in reverse and in feeding back to the grid…
What are the chances that they’re detectably different from when running in the regular direction?

What are the chances that they’re detectably different from when running in the regular direction?

Most likely slim to none, but if you are lucky the flash length might differ by a few uSecs but whether that could be detected even if it is the case, is another question. You would need to check the manual but (as a guess) I don’t think there will be detectable difference, if there’s one at all.

Most likely slim to none, but if you are lucky the flash length might differ by a few uSecs but whether that could be detected even if it is the case, is another question. You would need to check the manual but (as a guess) I don’t think there will be detectable difference, if there’s one at all.

It will depend on which - if any - options his meter has. (there are several available)
If his meter has the RS-232 option, then the LED can be set up to output RS-232 data.
(but, that’s a mighty big if)

His stumbling block might be his electrical utility’s reluctance to share any info with him regarding the meter itself. On the other hand, they might be more than willing to share that info. He won’t know unless he asks them.

Hi, I have an Aclara Kv2c Gen 5 and SunPower solar, and I’m looking into doing pulse monitoring, since my panel won’t allow for CT’s. Were you able to get this all working? What do I need to know before diving into this?

Welcome, Eric, to the OEM forum.

We haven’t seen @IrishLads since his last post here, so he might never see your question. Unless your utility company can tell you how to get export data out of their meter, and if you haven’t got access to your distribution panel and you can’t access the incoming cables anywhere else, I’m afraid there’s very little you can do to obtain the nett export power/energy.

If the flashing LED did something sensible - like flashed for import and occulted for export, it would be possible to distinguish and record import and export separately. To the best of my knowledge, no meter does this.

Thanks for the reply. I think CT’s and optical pulse are off the time for my setup.

I’m looking at the RTL-SDR solution now. Hopefully it works with my meter.

Closing the loop on this. The RTL-SDR won’t work with the kV2c Aclara Gen 5 because it uses PLC (power line communication) to transmit the data.

Other kV2c meters look like they would work with the RTL-SDR method. See here for more information: https://www.gegridsolutions.com/products/brochures/kv2-family_gea-12673.pdf