Measure heat retention efficiency of a room in SI units

I’ve the idea to try to understand how well my rooms are insulated to each other.
The approach is quite simple, heat the room to a set temperature then let it cool naturally and measure the ‘discharge’ curve.
Graphically i can compare rooms quite easy, the curve that is faster to decline is the less insulated room.

How could i quantify the heat loss in the SI unit: W/(m2K) ?
I know the room dimensions and inside and outside temperatures, is there a formula? 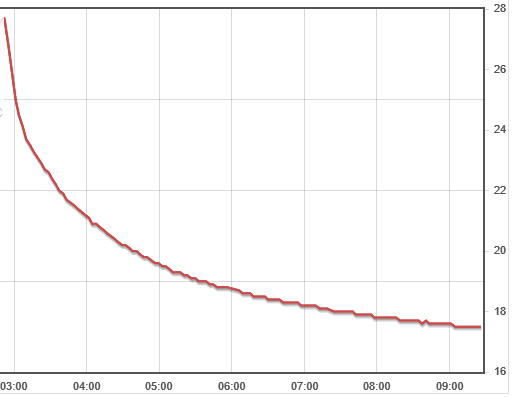 I don’t think you can determine it from that, in effect you have one equation and two unknowns in it. You need to maintain the room at a constant temperature and measure the heat input, then you can easily get to the average heat transfer coefficient.

Newton's law of cooling states that the rate of heat loss of a body is directly proportional to the difference in the temperatures between the body and its surroundings. The law is frequently qualified to include the condition that the temperature difference is small and the nature of heat transfer mechanism remains the same. As such, it is equivalent to a statement that the heat transfer coefficient, which mediates between heat losses and temperature differences, is a constant. This condition is...

But the number you get will of course depend on the “outside” temperature of each separate part of each surface, so for walls with another room on the other side, it’s the temperature of the second room that counts as the “outside” or environment temperature. You will need to repeat the measurement with different conditions in each adjacent room to be able to have enough equations to solve all the unknowns.

Now have to figure out how to calculate the ‘real’ heat output from my Daikin multi-split unit on that room as its higher than the electrical consumption. A new topic

You don’t have to use the heating that’s permanently installed. Any heater that you can measure and that can maintain a constant temperature will work for the purpose of making the measurement. You can use the Daikin to get the room up to temperature, then change over to (say) an electric convector heater to maintain it there. As soon as you establish that the temperature is stable, you can stop and revert to normal.

And even then, there are two ways to do it: Either feed a constant power in and allow the temperature to reach a natural balance, or choose a temperature and adjust the power input to maintain that temperature.