Looking for a "dashboard" solution

I have been using my emonpi along with a remote RPi3 and stuff to monitor and control my solar PV and EVSE alongside home usage, like many. As I may have mentioned elsewhere I have finally got my solar generation tracking going to vary the EVSE advertised current and this was all very well in the summer months but now that winter and shorter days are on the way I am looking at other optimisations;

I currently display the “mysolardivert” app on a 7" Amazon Fire tablet in the kitchen for general viewing but I want to now have a more interactive system. I have looked at hass.io and while it’s very flexible it is too precscriptive. OpenHAB runs on Java and I detest Java - the upside-down runtime pyramid approach scares me and makes me want to avoid anything on a small device like an RPi where I can.

So, I’m looking for any other dashboard type suggestions, where I can put some interactive buttons and toggles to drive the EVSE and other things in the house. I have built node-red flows for managing the automation, but things like “summer/winter” mode and “add 2kWh to the car now” options appeal. I have the injectors for this in node-red but can just as easily send them over MQTT etc.

How do you feel about the Arduino derivative of C++?

I know nothing about it, but C++ is a real, compiled language with no need for a multi MB radmonly updated runtime (shared libs don’t count)

We use Blynk to build our smartphone dashboards. Python, C++ and nodejs are all supported but C++ is the best supported.

Take a look at our dashboard at GitHub - pieman64/ESPproMon: ESPproMon © Smartphone App for Energy Monitoring with Appp © Technology
I need to increase the size of the dashboard images on GitHub as the actual images are much clearer than they appear.

Now that looks fun, thanks I’m going to look in more detail.

Ah! This is tied to using their services. I should clarify I am primarily looking for something that is solely in-house and not dependent on cloudy 'net based services - they are icing on a cake, not a critical thing.

Ah! This is tied to using their services.

Ah, teach me for not finishing reading, but their “quick start” page immediately talks about auth tokens etc.

Not wishing to sound like too broken a record, but “Blynk Server is an Open-Source Netty based Java server” …

Blynk Server is an Open-Source Netty based Java server

Which translates to, open source that will run on virtually any hardware ($10 Pi Zero W for example) but yes java based.

Sorry, it’s like a phobia. I only dislike python, but I detest java

You are not the only one!

I have looked at hass.io and while it’s very flexible it is too precscriptive

Home assistant is really nice. I had a quick play with it a while back and was quite impressed. I think it’s evolved quite a bit since then: 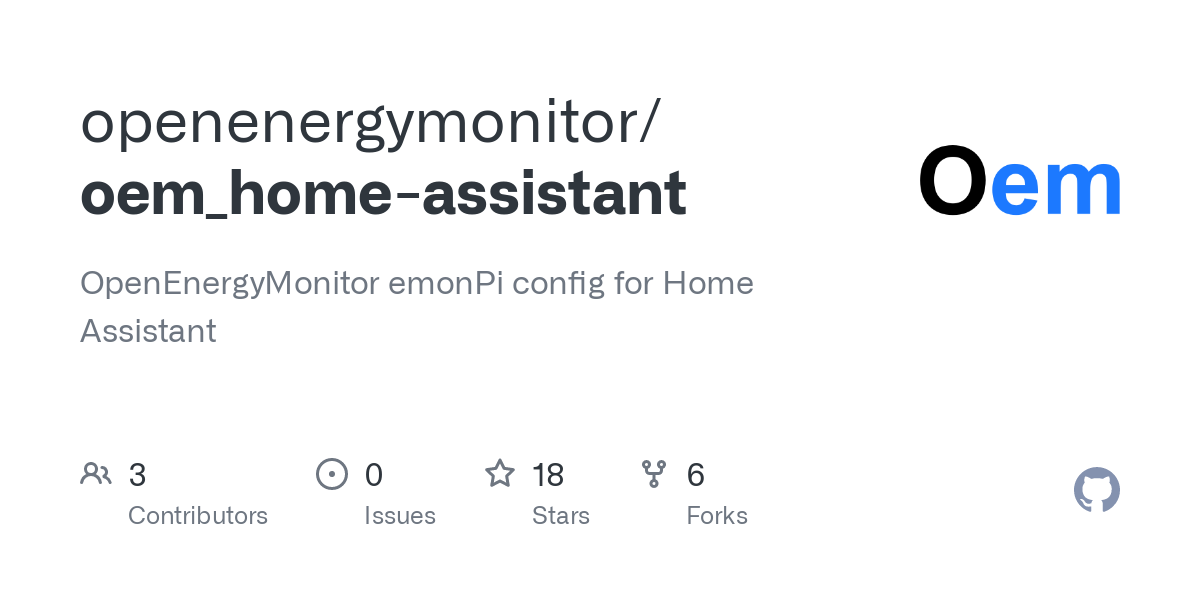 However I still use openHAB in my house. It works well once setup but the setup process is not that great.

I’ve built myself a dashboard using Dashing.io (or rather the maintained source on Smashing). Great tool, easy to install and work with and customize to my needs (I pull data from the local EmonCMS, and mix it with train info for my local stations, weather, shopping list, etc.). I currently deploy it onto Heroku, but next I’ll deploy it onto a web server on a Raspberry Pi. I then display it (or rather different versions of it showing different data) on an iPad in the kitchen, in the office, on my phone, etc.)

Nice illustration of whole house monitoring, with an emonTx shield, showing the fridge / freezer compressor kicking in and powering down through the night (blue and red lines) and the first cuppa of the day

pF can also be worked out for those that are interested (0.86). 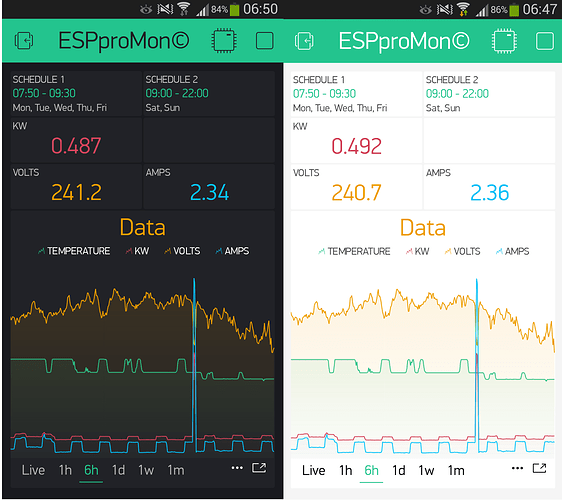 And the chart in landscape format: 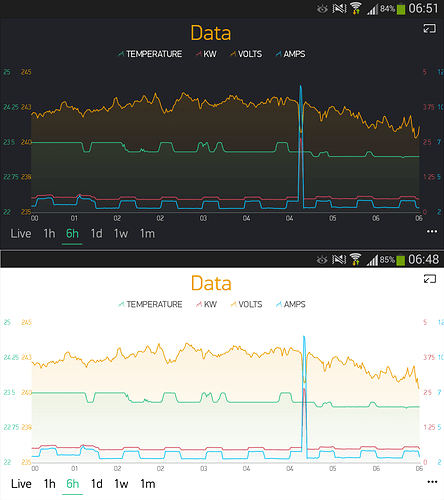 IMHO when you factor in embedded video streams to monitor your property, interactive maps, two way Webhook APi’s, phone sensors such as light and GPS etc there’s nothing that comes anywhere close to Blynk for interactive smartphone dashboards. I am not associated with Blynk other than being a massive fan.

Now then, before we publish the Smartphone app, dark or light theme?

Ok in the end it was no contest, dark theme wins. 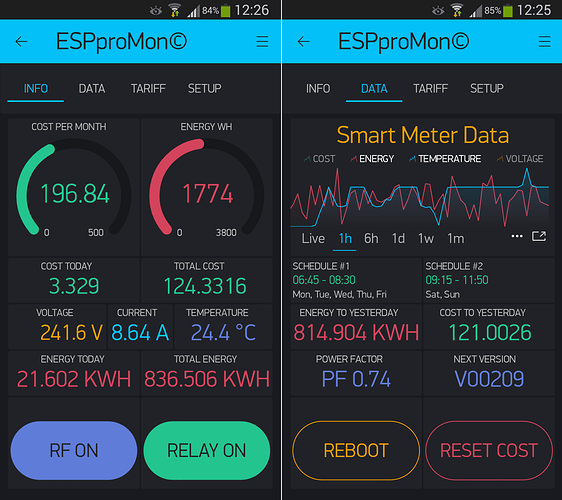 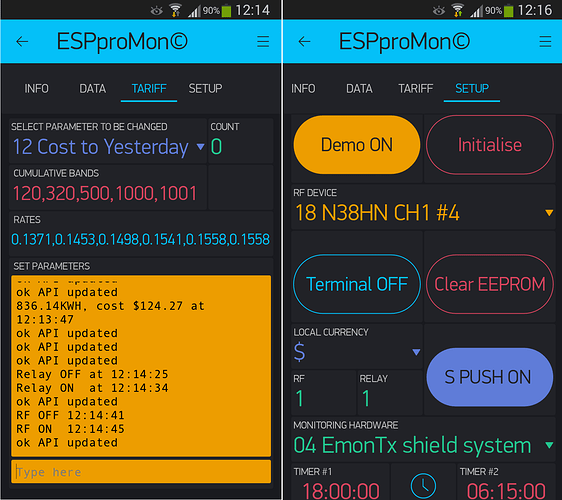 What about Node-RED UI? 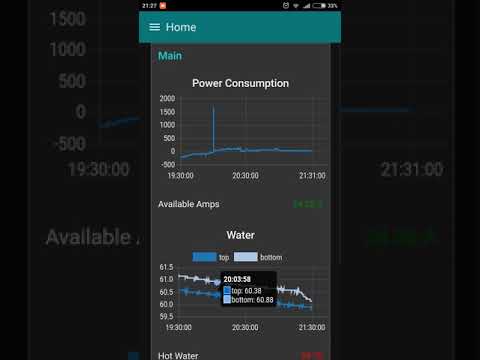 Lots of control buttons, drop down lists, graphs… and it’s already installed and available on the emoncms rpi image

Ok in the end it was no contest, dark theme wins.

I already use node-red but maybe I’ve missed something - but I only want output and input on a “simple” dashboard not the drag and drop code structure.