Hi Everyone.
I have had an emonpi for nearly 2 years but I am just realising something happened a few months ago and there is now a significant difference between the kWh calculated from the power input and the kWh from the pulse count.

It looks like it started back in April (I don’t pay enough attention to it but I think I had an issue with it not collecting for a bit and I ended up doing an update on it). 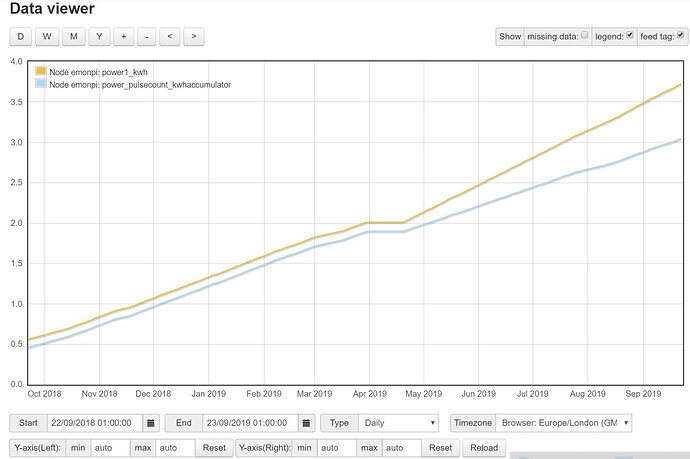 As bars for the daily usage, this is a little more obvious: 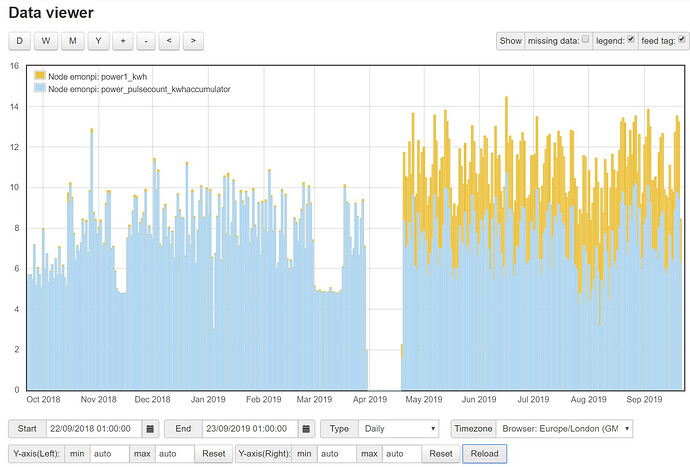 It is possible that the calculated value is correct and my energy usage went up, rather than that being the one that is wrong. Looking at the first line chart, I would make the assumption that that is the case rather than reducing like the pulse would suggest.

I followed this guide when setting up and have just checked it through again:

Oddly though, I have to use the scaling factor of 0.001, rather than 1 like the guide says, to get anything close to sensible figures.
My meter says it is 1000 pulses per 1kWh

This is the pulse input setup:

I have just upgraded again yesterday so not sure what versions I have been on, but this is the details now:

I am contemplating swapping to the latest emonpi release as the logs are not working after my upgrade yesterday but need to get another SD card and spend some time on that.
Even then, looks like my last few months data will stay skewed but would be good to work out what is going on if possible.

Please let me know if there are any thoughts on this or if you need more details to help.

Thanks in advance,
Paul

I could only post 3 images, being new, so just for clarity this is daily usage a bit closer so you can see how much of a discrepancy it actually is: 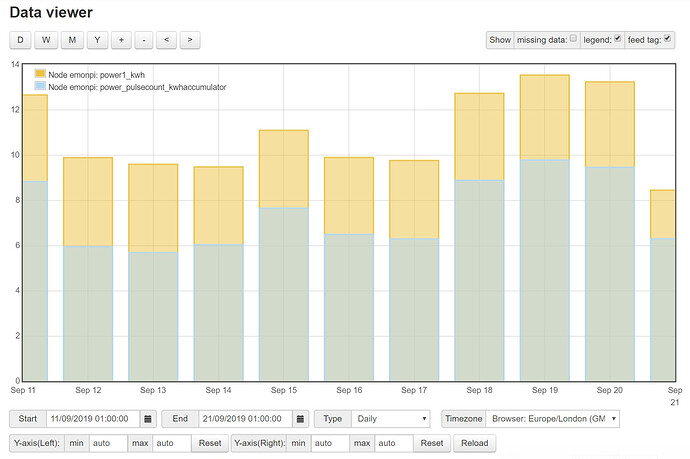 Welcome to the forum, Paul.

That’s not true any more - I’ve raised your trust level.

To the original problem:

It looks to me as if everything shut down for 2 - 3 weeks, and then it restarted with something in the calibration changed.

The question is, what did happen in the spring? If you’ve not materially changed your electricity usage, and eventually you’ll be able to check that against your supplier’s bills, I think I’d believe the pulse count (because those two parts of the blue line are very close to parallel), which means that you’ve changed the calibration for power1. Clearly, you didn’t deliberately change it, but did you, when you first installed the emonPi, do any calibration? If you did, it’s possible that the values you put in then got overwritten.

I don’t think the default calibration in the emonPi’s sketch has been changed recently, but someone who knows their way around Git will be able to tell us.

It is possible that the calculated value is correct and my energy usage went up,

If it has gone up, it means that your pulse counter is very consistently missing pulses. The only way that might happen is if it’s being blinded by sunlight (or some other ambient light) for part of the day. Is that possible?

Thanks Robert, always good to be more trusted!

I think you are right about it being the pulse count that is correct, it is inside a cupboard so no stray sunlight.
After I posted, I did think about looking at the bills (annoyed I didn’t think about that at first) and they are pretty close to pulse count version.
Unfortunately my bills start mid month so pretty close is probably within a few kWhs, whereas the power1 calculated version is 100+ kWhs more than the bills.

I honestly can’t remember what happened in April but a calibration change would explain it.
I was doing some home renovations so I’d probably just had it disconnected around that time, but I probably did do an upgrade as well, I can’t say for sure though.

I’ve got a plug in meter and for a quick test with the kettle, it was drawing 2.8kW but via emoncms it went up 3kW, so calibration being off sounds about right.
I don’t think I ever did a calibration when I first set it up but I also can’t be sure that I didn’t.

Would this be the best guide for calibrating?
https://learn.openenergymonitor.org/electricity-monitoring/ctac/calibration
And is a plug in meter and a kettle going to be enough or should I really be trying with a multimeter and a much larger load, both of which may be a little tricky?

That link gives the full procedure for the emonTx, which also applies to the front end of the emonPi. The quick and dirty way of calibrating the emonPi is also in there, some way down Learn | OpenEnergyMonitor which whilst not optimal, seems to be good enough for most people. I’d suggest you try that first.

I’d calibrate with a load that’s representative of your normal average load.