I’m releasing a new build to TestFlight in the next hour or so. This one though will come from a new App Store account that @glyn.hudson has set up. So it’ll be from OpenEnergyMonitor rather than my personal company. So if you’re on the TestFlight list, and wonder why you’ve been invited to a new emoncms app, then that’s why!

We’re also hoping this will be very close to (or maybe even exactly) the build we submit to the App Store. So please give it a good test out and let me know any bugs you find.

Mostly the changes since the last build are cosmetic things, and minor bug fixes behind the scenes.

During the various past I think you mentioned a Apple Watch version. Or maybe a “widget” for the “add widgets” iPhone page. just curious. (I don’t have a Apple Watch but always looking for a reason to buy one!)

after restoring the iPhone that decide to do me a nice crash (gosh first time ever that happened since ages) I’m back with this official release branch.

One little bug I found this morning is when you type a new name for an ‘app’ , if you type some letters and then ‘space’ and more letters … the space isn’t visible till you type the first letter after the ‘space’ … bit weird as you think you didn’t hit ‘space’ good enough … it is there but ‘invisible’ till next character.

I remember you saying that the iOS app requires https for external emoncms connections. It’s obviously interpreting http://emonpi as an external connection. I still think (if possible) it would be good to have a way to enable non-https connections to emoncms servers. Obviously, https should be enabled by default. However, didn’t you mention that such a function would be frowned upon by apple? Do you think we would not pass app store approval? If it’s impossible to add a ‘disable HTTPS’ function could the hostname http://emonpi be added to a whitelist? 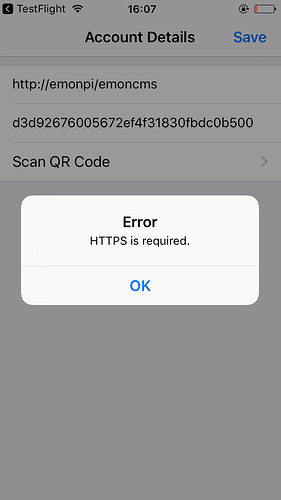 Another observation I had is that the app size (68.3Mb) see rather large! Is this correct? I’m not sure this is entirely true since the app seemed to download in seconds. I guess this size is probably normal for ios apps? 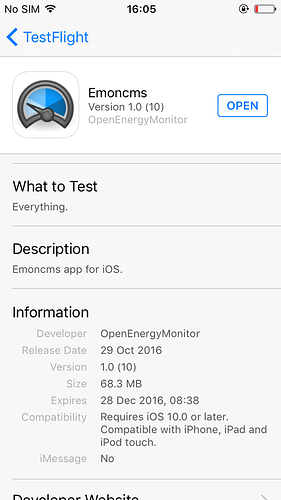 My personal server failed at “https is required” also

Once the iOS app is public we will need to update the Emoncms account page to notify the user that the QR code can be used for both Android and iOS and add a link to the iOS app store. Exciting times 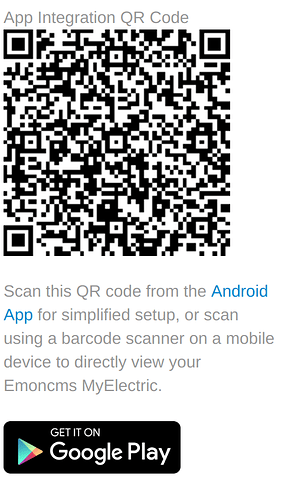 could the hostname http://emonpi be added to a whitelist?

Ah yeh that’s not ideal that http://emonpi doesn’t work. I guess Apple’s APIs aren’t that clever. Currently I trust what Apple says about when it comes back and says ATS has blocked the request. I was hoping it would happen after resolving the domain name, but clearly not.

I shall look into adding emonpi as an exception. I can’t see why Apple would have anything against this. It’s not a universally resolvable name anyway.

Another observation I had is that the app size (68.3Mb) see rather large! Is this correct

It is correct. I use a few libraries which are rather large unfortunately. On the plus side, it won’t grow much larger over time because those libraries are static. I’ll check to see if I can cut out some bits of the libraries we don’t use, but it might not be possible. I wouldn’t worry too much about it though. Apps on iOS these days are often fairly large. Updates will be cheap because Apple do binary diffs now.

During the various past I think you mentioned a Apple Watch version. Or maybe a “widget” for the “add widgets” iPhone page. just curious

These will come later. I got bogged down with them and they need more thought. Like what do we do when there’s multi account? What does the today widget show? I’ll come back to it.

Another observation I had is that the app size (68.3Mb) see rather large! Is this correct

I did some digging. I’m pretty sure the size once we go to App Store is going to be significantly smaller. The TestFlight builds have extra debug information in them which I believe is being reported in the file size you see in TestFlight.

iTunes Connect shows us how big the file will be for download. It says 20MB for the largest one (ignoring “Universal” which is essentially everything, but devices these days only download what they need.)

So I think we’ll be fine.

The problem regarding sending feedback is still there. You can only use Apple mail and not other mail apps like airmail. And as I have no accounts configured in Apple mail … I can’t use the function. Not sure if you will be able to bypass that but it would be nice it opens a list and allows you to choose what mail app to use.

Also is it possible to change timeframe in graph to 24h in landscape mode ? There is way space to show more then in vertical mode.

Also use the option : iPhone doesn’t go to sleep when emoncms in use, this way someone wanting to use iPad or iPhone as a little monitor can have it.Now it fades to sleep as set in settings.

iPhone doesn’t go to sleep when emoncms in use, this way someone wanting to use iPad or iPhone as a little monitor can have it.Now it fades to sleep as set in settings.

Hmm yeh I can add this as an option in settings. Could be nice. I think if your device is set to auto lock it’ll still lock though. For my iPad and iPod touch dashboards I have the auto lock option set to never.

The problem regarding sending feedback is still there. You can only use Apple mail and not other mail apps like airmail.

Yeh this isn’t straight forward. The Apple api for sending an email just uses their own.

I need to look into third party options. It would be nicer to have a proper feedback form anyway rather than just sending an email to myself.

Can I be added to test flight please