Hi, I’m new here, but looking for ideas. (I’m ex radio-electronics engineer turned electrician). Sorry not specifically emoncms but a generic problem I think.
A couple of years back I fitted a well known branded PV diverter (since recently ceased trading…) for one of my customers.
Flawless performance till the immersion element failed recently. I replaced the element and 'stat and since then, the tank stat is suffering endless safety cut-out faults. This is fixable with a small reset button in the 'stat.but when it happens 3 times a day, it gets tiresome.
Some relevant points are:
All modern 'stats have backup safety cut-out. The original didn’t have one.
The tank has solar thermal also, and on good days, this will try to exceed 60C, whatever the main immersion stat setting.
I don’t know the default setting temperature of the safety stats, but having tried two now, we are observing that the circuit is cut (by the in-series safety stat) when the tank is at or below 60C,
same happens with two different stats, different brands.
The customer would like to take the tank to 70…75C
Main stat is maxed out, it’s not this which is cutting the circuit, it’s the safety stat.
Trawling other forums I find a similar mention of this fault on IET forum.

4, Bad calibration of the safety stat…

If anyone has experienced this, (which would be a generic issue, unrelated to branded or other PV diverter). and has any other ideas, let me know please.

How does the PV Diverter operate? ie is it running as a phase angle controller or as an ‘energy bucket’?

The safety stat on our standard length immersion started to regularly cut out a couple of years back. I ordered a longer one but it was damaged in transit and a replacement was eventually obtained. As a stop-gap, I drilled several small holes in the plastic cap to encourage some airflow around the temperature sensor within - and the original stat has never tripped since. The replacement immersion & stat still have not been fitted …

The tank has solar thermal also, and on good days, this will try to exceed 60C, whatever the main immersion stat setting.

What temperature limit is set on the thermal solar loop?

When the over temperature cutout (OTC) kicks in, do you know what’s supplying the offending heat? Is it the electric element or the solar thermal loop? Looking to see whether the electric element was running before the OTC kicked in could be helpful, and ditto for the circulation pump. Or you could kill the supply to the electric element and see if the OTC still cuts out (by visual inspection of the button). 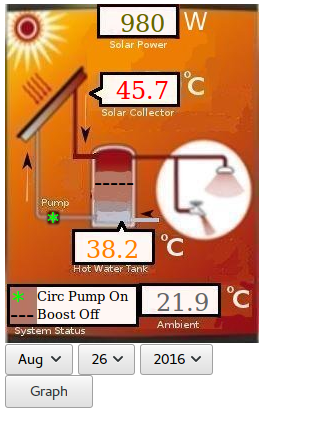 The black dotted line represents the approximate location of the electric element and its thermostat and OTC (turns yellow when the element is heating). On a sunny winter’s day the performance looks like: 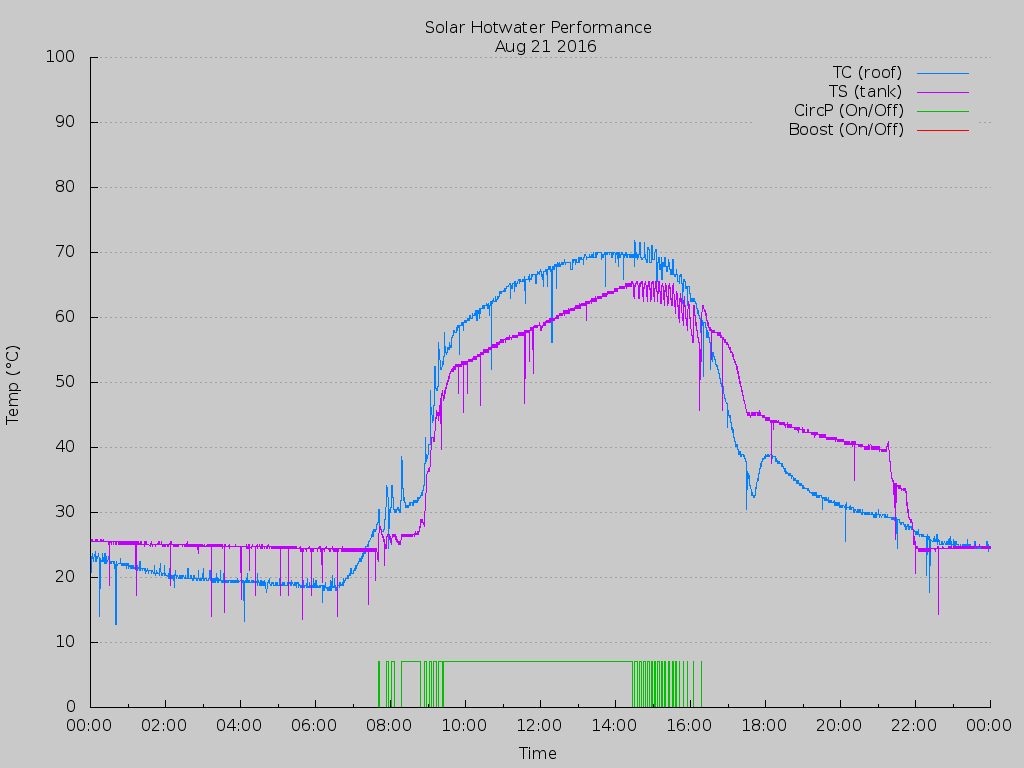 On a summer’s day when the house is unoccupied for a week, things get much more exciting: 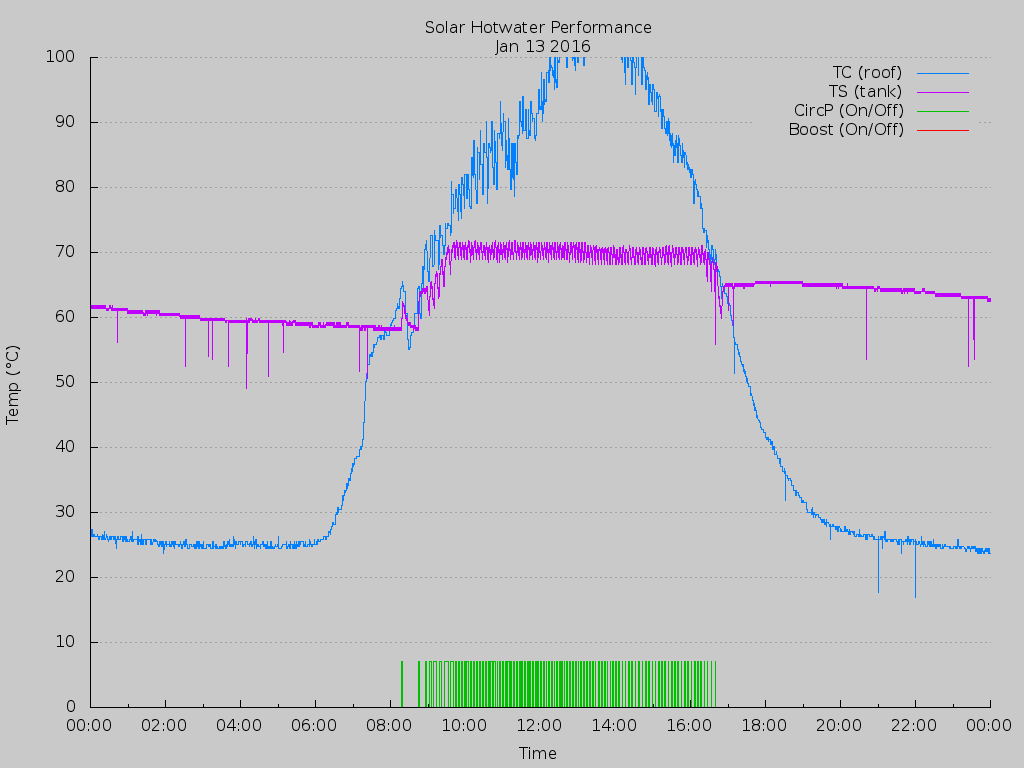 So at its peak there’s a temperature gradient in the tank from 70C at the bottom to something quite a bit higher at the top. Most OTCs in these parts kick in at about 90C which is usually high enough to prevent false trips during good solar thermal days. But almost all solar thermal manufacturers here tell you that if at the beginning of winter you’ve got no hotwater, and it’s been a long hot summer, check your OTC button to see if it’s been tripped over the summer by the thermal solar loop.

The two systems are typically completely independent of each other and the OTC tripping does nothing to solve thermal runaway from the thermal solar loop, but can indicate that the thermal solar loop’s own max-temp limiter is not working. At the first sign of trouble from either of the two temp sensors, those controllers usually shut off the circulation pump and declare a sensor fault. The roof collector is designed to boil, the tank isn’t. It may be as simple as the OTC temperature on the thermostats you’ve tried aren’t high enough for a solar-thermal system.

Thanks to contributors, I’ll summarize at the end.

It’s a phase angle controller, see my post at end since I worked it out!

Thanks for the thoughtful responses all. My delay replying because I have ben rushed off my feet,
Here is what happened, and it was not any of the previous possibilities I mentioned.

First 'stat was genuinely faulty and safety was kicking in prematurely.
I replaced it with another stat of a different make to remove generic issues. Customer told me that the same thing was happening but therein lay a red herring.

On returning, I removed the 'stat, and checked it carefully. It seemed to be clicking on and off, responding to the dial setting, with low resistance contacts. No obvious safety stat fault and no obvious main stat fault either.

On replacing the 'stat into the cylinder tube, 50% of the time it would immediately open. Now knowing the delicacy of the bimetallic strip mechanism in these things (Yes I have dismantled toasters…) the place to look was immediately underneath the welded on plastic cap.

It turned out that the teeny amount of sideways pressure exerted on the thermostat plastic cap as it pushed past the neutral terminal of the immersion, was enough to pre-load the mechanism and make it super sensitive to clicking open at ~ 55 C, independently of the actual dial screw-thread temperature setting.
After working this out, I could show it by putting gentle fingertip sideways pressure on the plastic cap and proving the stat was opening.
I cut a small opening in the plastic cap to provide a couple of mm clearance to the offending immersion neutral terminal, and thus far the mechanism has been working perfectly.

Hi dBc, thanks for some useful tips.

On a different note, I have experimented this season with my own Resol controller settings to try and reduce the stagnation problems. (I have no PV water heating since it seems superfluous).

About three years back we were on holiday for three summer weeks with high pressure and blue. A leak at a screw joint simultaneously led to pressure and fluid loss, with a result that a couple of further months of very early or continuous stagnation occurred before I had time to fix it with a clean out and new fluid.

The following 2 seasons, the performance was noticeably lower, and I even wrote to Ritter about it because I found it disappointing. I put it down to possible tube damage (But Ritter assured me this was virtually an impossibility). Alternatively it was perhaps due to deposits from the constant evaporation of old glycol.

After another thorough clean-out and fluid replacement, it was still not at it’s best. However, I wanted to try to reduce stagnation. I have no heat-dump.

I now have found that if during mid-summer, I set:
SMX store temperature, set really low, 15 or 20C. (yes really)
OCX ON System cooling (Allows access to CMX)
CMX 120C (set to just below boiling point)
Low SMX guarantees that the system immediately falls back on CMX and the tubes will rise to 120C before switching the pump on. This leads to an inefficient set-up with big heat losses and inefficient store heating, but it achieves it all without actually boiling the fluid of causing stagnation.
I find now that on a mid June day where I would have had an entire store at 70C and stagnation from 1…2PM, I now find the temperature climbs less quickly, and on a full-sun day tops out perhaps 60…70C (Never ever exceeded about 74 C, which is going some, but we do take care…). Importantly, I have never had a stagnation event which theoretically could still occur if the tank reached EM (Emergency temperature) which it never gets close to.
OCX ON will cool the tank slightly overnight.

Having done this, my system which had become disappointingly less efficient than when new, actually appears to have also cleaned itself out.
I have a completely unproven hypothesis that the regular circulation by 120C Fernox S1 liquid has removed contamination from the header which was previously built up with the standard glycol during the extended and damaging stagnation event.
Certainly on the cooler days I can easily heat the tank again properly right into the autumn as I should, whereas after the aforementioned damaging 2-month+ stagnation event, the whole thing had been poor, even after a thorough (cold ) flushing and fluid replacement.

Not sure if this thread is appropriate place to share that, but thanks anyway for your unrelated input!

It turned out that the teeny amount of sideways pressure exerted on the thermostat plastic cap as it pushed past the neutral terminal of the immersion, was enough to pre-load the mechanism and make it super sensitive to clicking open at ~ 55 C, independently of the actual dial screw-thread temperature setting.

You can’t legislate against that! I’ve had a few obscure faults in my career, that rates amongst the top few. For the next time, one of my standard techniques is to be brutal. That might just have revealed the fault a bit sooner.