Ideas for a DIY Powerwall but smaller, more of a "power fence" really

Ok, I’ve been thinking a lot about energy storage recently, and have come to the conclusion that while it’s a great idea, all of the commercial solutions are way too expensive, but it’s something I’d really like to play with.

So, after some thought, I’ve come to the following conclusions and would like some confirmation (or at least wild disagreement) of the results:

So, Ladies & Gents, your thoughts please?

*Obviously it would be better to do this from 5pm - 11pm to support the grid, and this is where it would end up, but to start with monitoring what’s going on will be easier when things are quiet!

The inverter will need to be grid tied and have a limit function to prevent the battery discharge at maximum rate - take a look at the SUN1000-GTIL2 inverter (google it!)

Don’t over look safety - fuses, breakers etc.
Are you charging from Solar ?

So, Ladies & Gents, your thoughts please?

The storage will be sealed deep cycle lead acid

He connected each type to his repeater radio station as an emergency backup power test.
All three had equal Ampere-hour capacities. The load current was the same for each test.

As one would expect, the standard automotive battery was exhausted after a mere 3 hours.
The deep cycle marine batteries fared a bit better at 10 hours before depletion occurred.
The golf cart batteries were still going strong after 24 hours. He stopped the test at that point.

He equipped his motor-home with 8 of the golf cart batteries wired series-parallel to give 24 Volts.
(6-Volt batteries) Charging was via 14 40 Watt PV modules. (this was in 1993-94) His motorhome had
a microwave oven, satellite TV receiver, vacuum cleaner, 100 Watt HF radio transceiver, as well as
lights running water, etc. When he showed me the setup, he mentioned the vehicle had not been
connected to grid power for four years. He said he used the deep cycle marine batteries prior to the
golf cart batts, and they never lasted more than a year.

I’m going to chip in some thoughts but I’m not an expert and don’t have much experience with batteries, except having done alot of research into LA for a wind turbine setup I used to have and the battery monitor I’ve designed, and then the research into Li-ion batts I had for a couple of different ebikes, but I’ve never built or specified anything really big n professional.

. If you’re buying new batteries, Li-ion I’ve heard is cheaper than LA once lifetime, peak power and especially the usable Ah are factored in. Second hand lead-acid seems like a good option, but if buying new… Consider also that the CO2 emissions from the manufacture of lead-acid per Wh are much higher than Li-ion, particularly cheaper brands manufactured in countries powered by lots of coal, LowPowerMagazine had an article on this. It’s quite possible your purchase of new LA would never repay itself in CO2 savings from the initial manufacture.
. You don’t need expensive welding tools put together Li-ion cells. Those tools are used because they are fast and a bit safer. There are definitely ways of soldering Li-ion, have a search.
. Complexity of the charging electronics? Both are complex I think.

It would be cool if someone experienced in Li-ion came along and gave a list of good suppliers for well-priced ready-made batteries and basic charge controllers!

Edit: Ah! I’ve just remembered the CO2 rebalance was massively dependent on the DoD of LA, 10-15% is treating that LA well! Anyway, here’s a vid.

Turn down the volume as this video crashes into existence. 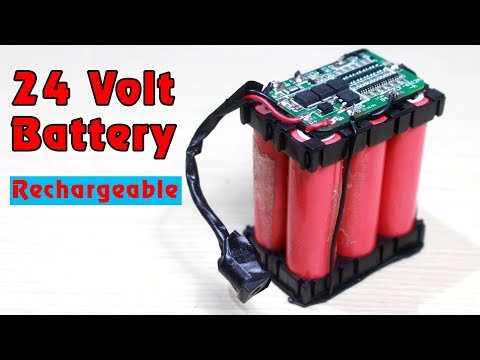 The GTIL inverter @stuart mentioned can match the injection with the consumption when the battery is discharging. We could even double the power by adding another GTIL.

On the charging side is there any charger that can do the same and charge only solar surplus?

This way the DYI powerwall would be independent from any solar system already installed at home. The cost is a small loss in efficiency since the DC produced from PV would be converted to AC and then converted back to DC to charge the powerwall.

I am interested in a similar thing. I don’t know how to use the emonpi to accomplish the power flows though.

@stuart Great info regarding the Sun1000-GTIL2, bit expensive, but it seems like a sensible solution which will scale up to 1kW of discharge. You say it’d take 10 hours at 125W to charge 800W of battery. How come? will there be that much overhead, lost to heat or inefficiency? I was thinking around 10% or so, so around 7 hours to recover the 800W?

@overeasy That’d be perfect for this job, BUT I’ve been reading about new battery tech for the last 20 years, solid state batteries, glass batteries, sulphur batteries, etc. I decided a few a years ago to stop getting excited about them until they actually go on sale and I can buy them

@Bill.Thomson Interesting info about the golf cart batteries. I’m looking into those. As for the deep cycles, as a data point how deeply was your friend discharging them?

@danbates That video was nice, but did you see the blobs of solder already on the cells? I’ve built Li-Ion packs like that already, and on some cells you just can’t get the solder to stick, and you really have to get some heat into the things, which I’d bet isn’t good for them, and takes a long time per cell. The terminal welders have come down in price though - ebay now has them for under £100 delivered. You’re right about the CO2 level, at 10-15% they last a fair while.

@cab123 No, I’ve not found a charger (that is mains powered) that can vary the charge current depending on the PV surplus. That’s why I was thinking about a single fixed rate charger that was active when there is enough surplus, plus maybe a second charger which is activated when there is more surplus. It’s far from a perfect solution, but as Voltaire used to say “Don’t let perfect get in the way of good enough”. We’ve got to start somewhere.

@rearden 0) We may not have to, if this GTIL unit does what it says it can. In which case the EmonPi will just monitor the situation, allowing charging & discharging at appropriate times/levels, all pretty easy. 1) I completely agree, but for basic testing there’s less going on at night and it’ll be easier to see what’s what. 2) Yes I have solar PV on the roof

3) Yes, ideally I’d like a battery pack out of a Tesla, but that’s super expensive and scary dangerous. And we’ve got to start somewhere. 4) I’ve built a lot of crazy stuff in my time & this may be the craziest, but keeping it cheap there is a chance it may pay for itself in 6-7 years. And it’s a hobby. And it will support the grid. And if Demand Side Response / Time of Use ever actually happens, payback will be quicker. 5) No, not completely disconnected, all grid tie inverters need the grid frequency to latch onto. Adding proper off grid gets expensive and here in the UK, we don’t really get any power cuts. So just zero import from the grid really. There are loads of other systems that do the same as the Powerwall, many around before the Powerwall, like SMA, Solax, Sonnen, Powervault and even Ikea.

how deeply was your friend discharging them?

He took them down to 10 Volts during the test.

He never said how far down he took them when they were in his motorhome, but Jack was a retired
Electronics Technician, and very methodical when it came to testing. So I’d guess the DoD would be
the same, or close to, his test value.

did you see the blobs of solder already on the cells? I’ve built Li-Ion packs like that already, and on some cells you just can’t get the solder to stick

Yes I did! Interesting… Even with sanding any oxide away and dabbing the surface with a flux pen?
. the board from the vid.

Edit: I had a go soldering a li-ion cell. I rubbed the ends very briefly with 120 sand paper, applied a bit of flux, and had no problem sticking the solder with a 25W iron. Very little heat needed and I could touch the cell immediately afterwards, it was slightly warm.
Also, I found a two separate videos online, one using a car battery and another using 30,000uF worth of caps at 12V to spot weld. Seems cheap and easy.
No more from me on li-ion now

Odd. 10V seems quite a serious discharge. The charts I’ve looked at on Battery University suggest that 10V would be 100% DOD? Or have I misunderstood something?

Or have I misunderstood something?

No, you’ve got it right. That was more than 20 years ago, so the ol’ RAM may not be operating
optimally.

i.e the number may have been greater than 10.0.

Yes, I’ve soldered maybe 75+ cells, perhaps half are easy, some succumbed with emery tape, but a good number just won’t stick and the cell ends up way too warm.
It hadn’t occurred to me to look up DIY welding, seems like £20 of gear would do the job nicely, most of which I already have! Oh, I so need more time to play with all this stuff!

Kewl, just thinking that the oxide thing might be related to galvanic corrosion of the anode. Was it either the +ive or -ive that was difficult to solder more often? Or about the same?
Edit: not sure if anodes of batteries corrode preferentially… I’m doing more research on this.

From memory, both ends had the same problem. The cells were mostly pulls from laptop battery packs, maybe 2/3 years old, but they looked in mint condition. I did have one pack that had been soaked (literally laptop left outside overnight and rained on. That one was slightly corroded around all the terminals (can’t remember which end was worse), that one was impossible to solder to!