Hi there not sure who might be interested, but in case someone might be here is a a little controller HVAC air exchanger system based on esp - it using the same configuration as my instant water heater only one extra Dallas digital sensor so 1 analogue and 3 digital plus 2 PWM to control two motors on 2 connected to 2 Fortek ssr-40 DA
in My climate and highly efficient house builds and extremely tight houses one needs to install HVAC air Exchange systems to keep the house air healthy. my air exchanger is connected to a small solar wall to offset heat loss during the exchange in winter months . since you have to exchange your air roughly 3 times per day.

so since my instant water heater controller worked so well- I thought I build one for my air exchanger. depending on what type of motor your system uses this may or may not work for you you need motors that are compatible with being controlled by TRIAC. in my case my system is using a basic induction motor so it work quite well with it. I can adjust down to 10% of out put and the fan will still spin though at 10% it air movement speed is about 1M/S…
here are roughly the M/S air flow rate the percentage duty rate .
10% - 1.1M/S;
20%- 2.1M/S;
30%-2.7M/S;
40%-3.3M/S;
50% 3.9M/S;
60%-4.4M/S;
70% - 4.6M/S;
80% -5.0M/S:
90% -5.5M/S ;
100% -6.0M/S:
it is working reasonably well but it needs more work on it scalar algorithm. as to internal solar wall start temp compared to the external outside air temp, as it differential increases so does the the step precision scale increase ( but over the next few months as it gets much colder I will graph it data then figure out a better scalar algorithm for it), in other words the colder the ambient air is out side the smaller the step increment is for the TRIAC . and the the Warmer the Ambient air the the bigger the step increment.
the reasoning behind it is I do not want to over heat my house to much on a sunny day I would prefer a much higher rate of air exchange . so it will adjust the air flow through the solar wall to match the temp differential I want IE: 10c , so if my house air temp is 22C the incoming air from the solar wall coming in at 32 C. once the the solar wall cools down the fan speed drops to it minimum to create a very low air exchange during night time periods and during Daytime periods the rate of exchange increases dramatically. I also installed a minimum temp shut off so if the output air is colder then x degrees the HVAC system will stop all air exchange until it is warmer or there is enough solar energy to maintain the basic air exchange again…

but here is the a working sketch

Nice project, I look forward to see the outcome of your work over the next couple of months.

One question though, you mention that you will change the airflow rate according to seasons so that you don’t overheat in summer and overcool in winter, is this because all of your fresh air is coming via the solar wall?

If you had a source of cold air, like a long duct dug into the ground you could get even closer control of the air intake temperature, you should probably use a air to air heat exchanger in the cold air source so you don’t get mold in your house from the duct in the ground. You would need a small fan on the primary side of the heat-exchanger for this to work though. You could even use a swamp cooler on the primary side to further cool down the air in the summer where the humidity is low enough for it…

Having a constant air intake temperature would make the rest of the controls a lot easier I would think.

the solar wall shuttered in the summer. as it pointless to produce heat at that time of year and it at a passive angle so the higher the sun the less energy it produces naturally anyways . sure I could blend the air and use a constant flow rate but then i would also need a to expell the air from the the solar wall. if you do not then the air temp will continue to increase in the solar wall and you need to open a damper more and more anyway to compensate . and a relatively stagnant solar wall is sitting around 200C or more . secondly my winter temps are quite low - averaging out at -16C. and nights are long ~16 hrs probably averaging at 14hrs when the average temp -16c. so energy wise it more advantageous to move more air volume during the day when it “warmer”. bringing down the humidity as much as possible during the day. then letting it creep abit at night.

warming air day time air that is -10 to -15 c ( not nearly as brutal as warming -20 to -30c night time air) is about 1 gram per KG of air which is about 17 grams less then what normal house hold temps can hold - so the incoming humidity will be about 5 -10% during the day bring down the humidity to ~30% or less then letting it creep during the night I do not mind that… if I had milder winter temperature then a more constant air flow would probably be good but I working with retaliative extremes temperature fluctuations … but currently it still “warm” as the day time temps are still above zero ( 6c currently - snow and ice rain expected tomorrow though ) but we will see as the temps get colder right now it still quite "warm’ actually balmy for this time of year - have not even had a kill frost yet. which says something and still had cucumbers growing a couple weeks ago…

Morten_Mortensen - reread your post this morning see I miss interrupted it a bit… not so worried about summertime overheating it wintertime over heating is my problem - as I use a thermal mass heating system in my house already. and on sunny day ( which is very regular especially once it drops to below -16c generally cloudless for months ) i will somewhat overheat already. as my thermal masses are heated by evacuated solar tubes ( 7kw worth of them) so on an average sunny day that about 28kw of heat input. and there a bit of heat seepage. so in the morning I might have house temp of 20 -22 c but by the afternoon it would creep up to 26 - 28c… so I am trying to mitigate some of that creep by adjusting the air flow from the solar wall ( which is about 3kw/hr of added heat( 12kw over a day or about 4-6 kw once you deduct the air exchange ) i would rather dry my house down more during the day when it it advantageous then pulling in much colder night time air-- but then i was thinking perhaps i might dry my house to much so i might add a humidity sensor to it that looks at the inside humidity, temp and outside temps and adjust to the correct moisture content, whether it should be 30% or 40 % or 20% when it is extremely cold ( ie -30s or colder which I generally get for 1- 2 weeks in late January early feb ) in an attempt to converser as much energy as possible

update and rebuilt my controller for HVAC/solar wall
used a larger screen and added a Humidity Sensor.
just to find and build a box for it an install the unit again
adjust the motor Scaling algorithm it working much better now
also included Humidity algorithm that will adjust house humidity base on outside air temp. once humidity level is reached, it shifts from drying out the House air high volume air movement to converting to heating the air ( lower air volume movement).
also adjust minimum temp. instead of shutting down fan I set it to very minimal movement to prevent icing

well found a box for it . made it from an old engenius radios I have ( have quite a few dead ones from my ISP that I maintain and run) 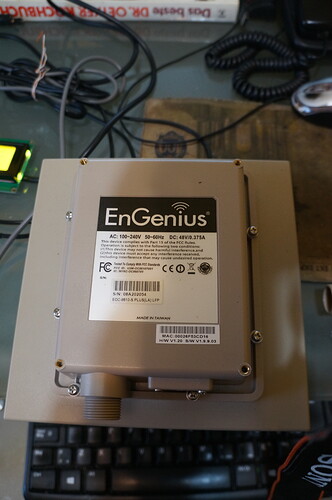 a nice box that can be use as water tight box if I need for later projects
in the end, the controller unit looks like this- maybe not the prettiest but works nicely

the sketch now has three light incorporated so you can see operating condition at glance . yellow – fan speed( minimum setting and programming mode). green auto temperature adjusted fan speed mode ( core is at operating temp) - and red - for extreme cold warning or running in warming mode . and dimmer for the LCD screen.

it working very well. it drops the humidity down nicely in the house then once it reaches minimum humidity levels based on the outside temps it switches modes from drying mode to warming mode ,
if you wish the sketch with the 3 lights here it is ( it also has a couple minor error updates );
HVAC_temp_controller3_digital_and_analog1__DHT2.ino.zip (4.2 KB)

Stephen, can we see some photos of the solar wall?

And how the venting works?

hi Vster not home for the next bit. but I had a picture on my laptop… of when I built the the solar wall it not that fancy. there are more efficient method of building one but i have a ton of 6 inch pipe that some one threw out ( brand new - 200 pieces probably $2000 worth of duct work.) 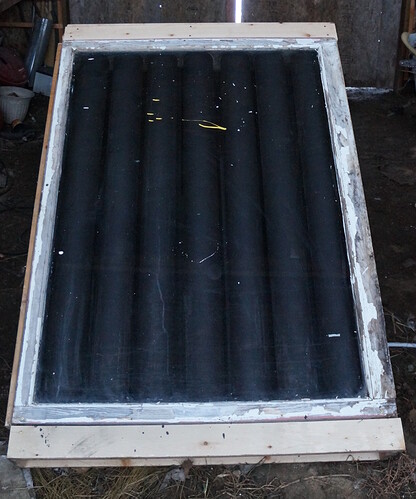 DSC04233.JPG2816×3384 1.43 MB
The glass is about 3 sq meter… it sits on top of my solar drying room (for laundry and stuff) that attached to my house ( which is about 3sq m) – my heat exchanger is actally quit simple too it. it about 20-30 % efficient I have a smaller pipe running within a larger pipe for about 20 feet. with in my attic the air that goes in is about 10 -20 degrees cooler when goes out and the air the comes in is about 10 -20 degrees warmer then what comes in ) that basically a 4 thin aluminium in pipe inside a 5 inch pipe that insulated that on a incline. so the condensation runs straight outside … an a a junction is t pipe where one input is 4 in and the other a 5 inch… you pull air from upper level where the air the moistest …
danbates (Daniel Bates) 25 March 2018 10:03 #9

Nicely done.
For the purposes of space heating, solar air collectors are more efficient than wet systems or PV. With a small solar PV panel to power the fan, it becomes a really great off-grid heater.
I’m sure we’ll see many more solar air collectors with positive displacement ventilation in the future.