How many circuits do people monitor typically

I really like what this system does and so before dipping my toes in I would lie to understand how far people go with monitoring circuits. A typical consumer unit will have way more than the 6 available CT sensors can measure. Do people people just measure the main plus a few of the more important circuits or do people go all out and measure all circuits by using the add-on module.

Welcome, Aaron, to the OEM forum.

The emonTx V4 - which is what I assume you are referring to, other emon** and even emon**** devices are or have been available - has only been on the market for a very short time, and the expansion module isn’t yet on sale. So I think all you’ll get is hopes, not experience, in terms of the V4.

A typical consumer unit will have way more than the 6 available CT sensors can measure. Do people people just measure the main plus a few of the more important circuits or do people go all out and measure all circuits by using the add-on module.

I think the nirvana is to monitor them all, with the 12 CT option, that is probably possible for the majority of households. The problem then is the CU has not been wired in a CT friendly way.

It also depends on why you are monitoring. After a while, the use settles down and you take less notice of it on a circuit by circuit basis.

I was also thinking that after a while then certain things become less important to monitor and others more so. Thanks for confirming. I think that for me the important measurements will be around heating and Hot water. Things like lights and ovens etc will just be normal use. Outside and indoor temperatures as well so can see loads vs temps.

I have two emontx4 devices - one in the airing cupboard monitoring power usage by my heat pump and immersion heater (as well as flow/return temperatures), and another one by the consumer unit which at the moment only measures input from the grid, but will monitor solar when they get installed and hopefully monitor the batteries too (not yet figured that out). I monitor room temperatures with Shelly Plus H&T devices (via Home Assistant), and use a smart plug from LocalBytes (again, via Home Assistant) to monitor usage of individual devices that I’m interested in (tumble dryer, washing machine, dishwasher, fridge, etc). I could probably start monitoring the oven circuit via the emontx4 for its usage.

Hey @IanHarris that really helped me think about how multiple units can be deployed. I was always thinking that it had to monitor the consumer unit but it doesnt. It can monitor any power cable.

I made this mistake myself - you need to measure the voltage on all emonTXs because the calculations are done on the emonTX before sending them off to their final destination.

I wonder if that could be improved upon by the team for v5. It would be nice if only one unit or even the RPi base unit measures the voltage for the calcs from all units

I believe it could be done with a cable between two emonTXs, but I suspect most users would have multiple emonTXs in locations where running such a cable between them would be impractical. And the voltage is needed instantaneously for the adjustment of the power to the point where over the air updates rather than the wire would be inaccurate. The difference in voltage from one instant to the next can be quite pronounced. 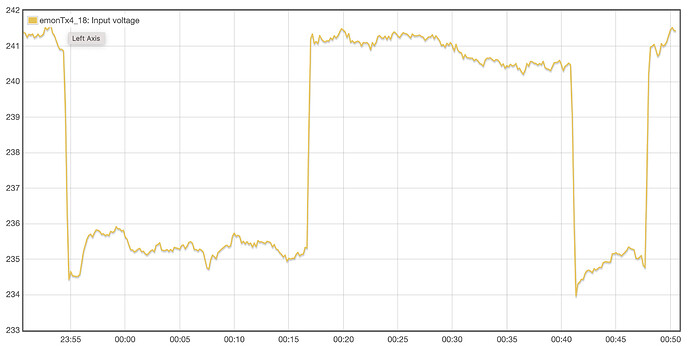 I wonder if that could be improved upon by the team for v5. It would be nice if only one unit or even the RPi base unit measures the voltage for the calcs from all units

The difference in voltage from one instant to the next can be quite pronounced.

When you consider that the INDIVIDUAL voltage and current samples are multiplied to give the instantaneous power, then averaged to give the real power - and there are in the order of 30 samples (or rather, sets of samples) per mains cycle, there’s a lot of data that needs to flow.

Take the emonTx V4 with 3 10-bit voltages, Trystan had hoped for around 2000 sample sets per second, that’s (sending 16-bit values, no checksums) 96k bps - to be handled at both ends and the delays due to processing accounted for. And don’t forget - a time error looks like a power factor error in the load you’re measuring, so at the receiving end the samples local and remote need to be synchronous to better than 1° electrical - at a p.f. of 0.2, that would turn into a p.f. of 0.18.

If you want to get it going, you’re welcome to try.

But if you only want apparent power - then it’s dead easy because you’re then talking in terms of tenths of seconds at the most - more likely an average over the 10 s reporting period that most people seem satisfied with.

thanks for the detailed explanation. It makes sense now.

Both my emonTX4 voltages log to the same feed rather than seperate feeds, so they are pretty much seen the same by each other.

If this is the case - you’re gaining nothing. The last one to have its data arrive in the time “slot” called the feed interval when you hover your mouse over the Feed, overwrites the earlier one. So as the two aren’t time locked, it’s anyone’s bet which one gets stored.

ystem does and so before dipping my toes in I would lie to understand how far people go with monitoring circuits. A typical consumer unit will have way more than the 6 available CT sensors can measure. Do peo

As others have said it depends what you want to achieve, in my case it’s behaviors in the house, a few examples of this showing where the data comes from.

My system is pretty hybrid based on an emonPI with 2CT’s (solar PV feed and DNO supply) and a range of other inputs that are not just core emon products.

Do you have any issues transmitting through walls etc. My new house is planned to be a passive build so airtight but I would like outdoor sensors. I have concrete and stone floors / walls so am concerned about how to get a signal to the base unit. It is possible to put a cable through the envelope at build time and seal it with tape.

My new house is planned to be a passive build so airtight but I would like outdoor sensors.

There are all sorts of things that need to go through the fabric, outside light cables, internet/fibre etc.

I put some round plastic conduit through the fabric, sealed that then pushed cables etc through then sealed the pipe with silicone.

Try and put your gas and electric meters as close as possible together! If not the ‘smart’ meters will never communicate! If I built a house again, I’d put both outside and put a 13A socket in the outside box.

No gas, just electricity. I believe in NZ the consumer box needs to be inside the house. Its on a hillside so HW cylinder will be under the house and has 3 heating elements to heat 500 litres during free hours of power. Was thinking of having one unit outside to measure the 3 independently controlled supplies to the HW plus an outside air temp thermostat, plus cylinder temperature. Then another unit to measure all other circuits inside. The floor is two layers of concrete and lots of insulation between. So if I cable it, can I run a long USB cable.

I put some round plastic conduit

I second that. Put pipes everywhere you can think of, then some more. The idea is an empty pipe is future-proof - if not totally, then at least more so than cables are likely to be. Cap them if insects or rodents are likely to be a problem. Seal with a weak mortar mix if you’re worried about the risk of fire or smoke spreading.