Continuing the discussion from Availability of gas sensing devices:

This request made me think about this again. I’m no electronics engineer, but a quick Google threw up these sensors http://www.digikey.co.uk/en/product-highlight/l/littelfuse/hall-effect-sensors The 55110 looks like a useable sensor (with visible LED). Could a constantly powered (I think from previous discussions the battery would not last long) EmonTH measure the meter pulses with this? You would need a physical wire from the gas meter but I think that is a given whatever the solution.

Maybe, but that one does need a 3.8 V supply, so that could be a show-stopper if 5 V isn’t available. A lot depends on the strength of the magnet (always assuming there is one!) in your meter, and the practical difficulties of mounting it.

As you point out, most probably you need a mains power source.

I looked at a solution ages ago for gas meter reading where by a small camera took a picture of the meter dials every 15 minutes and then OCR’ed them - very accurate but a complex way of doing it!

I’ve also seen a sensor out of a computer mouse used…
http://www.rotwang.co.uk/projects/gasmeter.html

I plan to do something similar before the heating season. Most gas meters, including ours which is an OEM Elster, have provisions nowadays to drive a Reed switch at every 0.01 or 0.001 m^3. Just google for “gas meter reed switch” and you’ll see what I’m talking about. I’ll use an Arduino-based RF transmitter (probably a Moteino with RFM69CW) which will sleep most of the time, waking up only when the switch closes and 5-minutely otherwise as a means of keepalive/fault detection. No wires needed, you can easily make it compatible with the EmonTX/EmonTH wireless protocol or you can use something that posts to the MQTT server. Maybe one could even use the pulse detector input on an EmonTH.

I have a Hamlin 55100 based gas monitor here waiting to be installed on a job of mine. 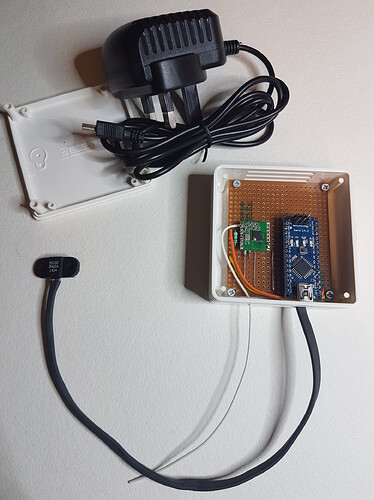 I first tested the sensor on the gas meter in question when I was there last, using a USB connected nano (5v). It worked perfectly ok, so I have tidied it up, added an RFM (with voltage divider level correction) and put it in a emonTH case, there is a socket nearby so need to consider batteries. I’m just waiting to get back on site to install it.

I also have the bits here to monitor my own gas supply as when I tested this one on my own gas meter, it also worked fine. This time though, as the gas meter is on the opposite side of the wall that that my elec monitoring Pi is mounted to, I will just drill a hole and to connect to it directly via a USB port on the Pi rather than RFM and power adapter.

I bought the sensors from Sprirotronics

@pb66 This looks brilliant. Do you have any more details anywhere?

I should have some hand written notes somewhere, sorry I’m in a bit of a mess at the moment due to workload. I had planned to document it when I did the next one on my own meter.

I’ll see what I can find. but I found the sensor to be very easy to use, surprisingly so, therefore both the circuit and the sketch were really quite basic, but having said that, it hasn’t been put into service yet so I shouldn’t ‘count my chickens’ just yet.

It’s only the RFM part that requires any “circuitry”, the sensor has 3 wires, 5v, gnd and the 3rd one goes to one of the Nano’s 2 interrupt pins D2 (int0) or D3 (int1) there are no other components required.

I think this is the sketch used
basic_gas.ino (1.5 KB)
but I might be wrong, I will need to look on my workshop PC tomorrow to be sure.

Hi Paul, Back on this again as I have now got a hall sensor. I was thinking of using an EmonTH but £40 is just too steep IME when I don’t need battery cage or temp sensor (for another thread), so I thought I’d roll my own.

I’ve never bought they types of boards in the picture - could you point me in the right direction for them please?

Hi Brian, the one used above is just a cheap Chinese Nano, the main point to watch is they are 5v so when hooking up RFM’s etc you need to be voltage level savvy.

I use these for dev work as they are [email protected] with an optiboot bootloader so USB uploads are easy and they are quite similar to the emon devices.

There are also Arduino ProMini’s that operate at 3.3v but they are often 8MHz and the 5v ones 16MHz, With some digging you can find 16MHz ProMini’s that are voltage selectable, they are the ones I sometimes opt for so I can run 3.3v 16MHz, But the ProMini’s do not have USB and the 6pin programming header is not exactly the same as the emon 6 pin header/programmer, so a simple adapter lead is needed to program using the emon programmer.

Are you using an RFM? are you using battery power?
I used the usb Nano in this instance so it could be easily powered via a 5v mini usb wall wart.

It’s worth noting the particular hall sensor I used will not work at 3.3v (3.8v Min)

The Loop Energy Saver firm have a sensor for Gas, has anyone seen it and can one be sourced to be added to the EmonPi ?

I’m not into electronics so even using a raspberry pi will be a tough learning curve but the need to monitor my gas as well as electric is a great incentive.

I agree with the above comments that my gas consumption is far above my electric.

I’d suggest the cheap and easy test is to acquire a small magnetic reed switch and, using a multimeter, check that it works. If so, you can then think about fixing it to your meter and connecting it. It will be slightly harder than a Hall effect sensor to do in software, but it requires no complicated interfacing (which some - not all - Hall effect sensors will need) and little in the way of a power supply.