I have been using (not as admin, just member) various forums for years, but they generally looked the same.
There’s the index or front page listing all the subforums, or sometimes all forums grouped together by subforum.
When looking at the list of topics, you could see who started a topic and when, and who replied last and when they did.
When making a new topic, you were on a full page.

So far, Discourse is none of that.
Is that a problem?
Maybe not after you get used to it.
But I certainly had a moment of “what the hell is this I don’t like it already”

Maybe not after you get used to it.

This is not me complaining, I’m just trying things out and needed something to talk about.

Ok, this part IS nice. Direct preview as you are typing.

Had to make another post because new users can’t upload more than 1 image per post which it only tells you AFTER you’ve ALREADY UPLOADED them >.<

Same here. Definitely a WTH reaction from me too. After using it a bit though, I can honestly say it’s a step up (in certain respects) from Drupal.

Is anyone else trying it on a touch tablet with Win 10 using Firefox? For me the touch keyboard hides the dialog box to type in anything.

I think this is an issue for @discourse to investigate. Mobile view works fine on my android phone and 7" Android tablet. Please post screen shot example

Did a bit more testing. It is a UA problem. Works fine using Edge but not with Firefox or Chrome.

This is the view after hitting reply! 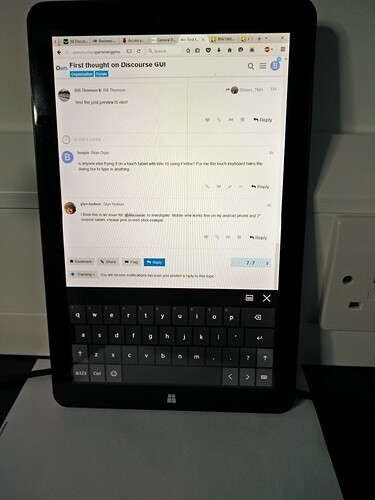 If I touch off the input box, the keyboard goes. 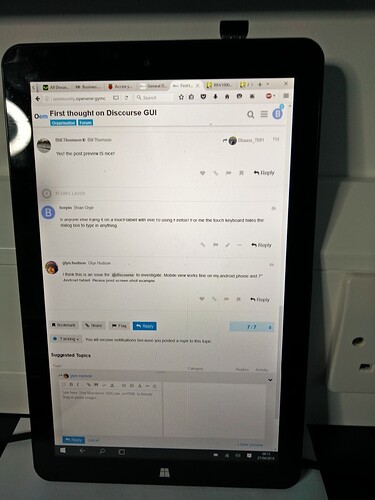 I think this is an issue for @discourse to investigate.

I was going to raise it but there was no obvious user forum on their website and I didn’t really want to create an account.

I use a Hudl2 10" tablet 4 at about 2.2. it gives me the same problem with firefox beta and chrome. I am not prepared to find any other browser since i am engaged in the RSA study of platforms for its zfellows Forum. I am typing this input blind aswell… As you may noticed by now!!! Not good at all… In fact absolutely useless.

The trick I have discovered is to un-dock the keyboard and drag it up so the input box is below the keyboard.