Hi I have a issue with the ESP32 module for the OpenEVSE system.

Of some reason maybe a interrupted upload of firmware I now have a ESP32 not working.
The board is now rebooting all the time with the following output on the uart:

I have tried with diffrent versions with out any luck.

I am using the NodeMCU PyFlasher to flash the prebuild image.

But if I try with Arduino and uploading a fresh compiled test software the ESP32 starts up, without any problems.

What is it that I am doing wrong here, can it be that the downloaded image must be uploaded thug the web interface, is so how can I get back on track again.

@glyn.hudson is the man to help

Am I really the first one with this problem?

@glyn.hudson @TrystanLea - sorry they are the only 2 who can help.

It sounds like you will need to use esptool to perform a full erase then upload the firmware:

The module was purchased from openevse in the US a few weeks ago, the one there is on the way right now is just a backup.

I was working until I tried to update it.

I have tried to erase the flash as you suggested. 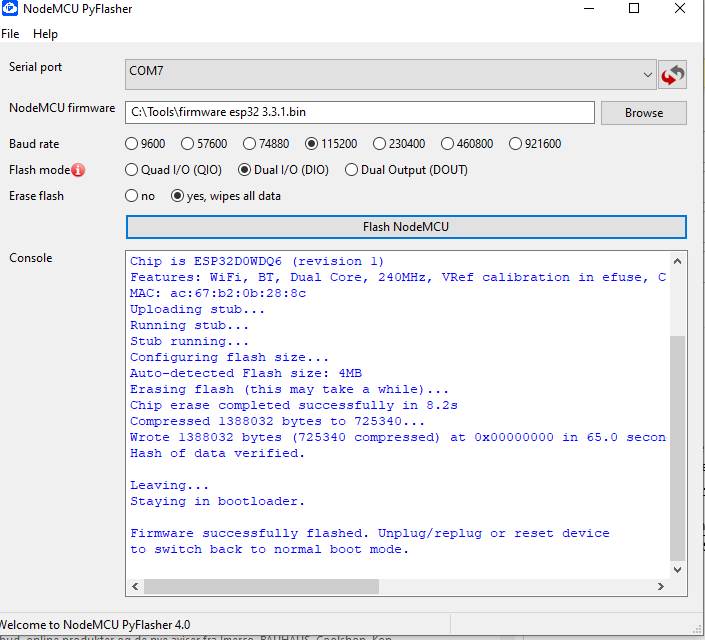 But still rebooting and dumping the same on the uart

@oz1paj
I’ve tried to format your post to make it a bit clearer.

@Robert.Wall
Thanks, I did not know that.

Just to try somthing, where can I finde the bootloader.bin and partitions.bin without compiling everything myself ?

Sorry, I’m not familiar with the ESP32.

Pre-compiled versions of the ESP32 OpenEVSE WiFi V3 firmware can be found on the releases page: https://github.com/OpenEVSE/ESP32_WiFi_V3.x/releases/

Hi Glyn
Strange that I did not see the files before.

Now the ESP32 is working again, thanks for support.