EmonTX4 - use old or new kit

I’ve been following the new hardware with interest.
I currently have an emonPi, emonTH and an emonTx v3 for my home.
I’m looking at setting up monitoring for a local church, and am trying to work out the best approach - if I buy the new kit for my home, and then reuse my existing kit for the church, or just put the new in the church.

How difficult is it to either:

I use the emonPi for emonCMS and extensively for nodeRed.

Any help is much appreciated.

I’m looking at setting up monitoring for a local church,

Either way, you will need to do a reasonable amount of rework, especially as you use Node-RED. Last time I attempted to migrate a Node-RED setup it was an unmitigated disaster!

You can, just provides 2 more CT inputs. It’d be a bit of a waste to just use it for EmonCMS.

I think both set ups (emonPi + TX v3 and emonTX v4) both allow monitoring of 6 circuits, it’s just (I presume) the newer kit is better.

I (think) I have transferred Node Red details before when I had to rebuild my SD Card, so I’m not too worried on that, but I’m thinking that I will need to rebuild all the feeds in emonCMS when I change because they will come from new inputs - or will it just be the 6 circuit inputs that I will need to move?
Can I backup emonCMS from emonPI, and restore it to an emonBase?

Is there also a change in the RF encryption for the new kit? Would it be better to keep it all new, or all old?

I’ve broken it out into a linked thread.

the newer kit is better

More accurate and flexible is the best description.

I will need to rebuild all the feeds in emonCMS

All you need to do is point the new inputs to the correct existing Feed and introduce any other processing you may have done on those inputs.

You could plug the TX4 into the EmonPi (by USB), update emonhub so the inputs appear in the input page. remove the processing that puts the old inputs into a feed and create the new processing to log the new inputs to the feed (i.e. change the input source for the feed data). Backup Emoncms and migrate it to a new device.

You do not really need an EmonBase with the RF. just an RPi (or any Linux based mini computer) that you can connect the EmonTX4 to via USB will be fine.

Is there also a change in the RF encryption for the new kit?

It isn’t encryption, it is message format and that can be made compatible with an old EmonPi.

Thanks, That helps a lot.

Is the EmonTX USB option only for the v4, or can the v3 use it too?

If it is just V4, then I think I either have to:

Next step is for me to have a proper look at what the church has, and how I can get to the circuits etc.

The V3 doesn’t have a USB port, just a bare UART so yes, but not as easily. (Search for Pi Zero Serial here).

Bad because it will mean reconfiguring everything

No, you could use the existing setup on a different Pi (although I’d suggest migrating to a new card and the New EmonSD image when it arrives) and put a new EmonSD into the EmonPi for the church so a blank canvas.

Do a part swap - the EmonPi for the spare Pi (unless you have one).

After a bit more investigation, it looks like the church has 3 phase power - which is not something I’m familiar with.
Would I be right in thinking that I would need to either wait for the 3 phase implementation of the v4 kit, or use the approximate firmware on my V3 TX?
If I use my V3 TX, would that require all 4 CTs to just measure the consumption? ie I would need something else to monitor Solar?

I’ve lost track of what is going where / what you want or need to measure where.

The emonTx V3 was designed for single phase use. The “approximate” sketch replicates internally the phase it measures, assumes the other two are identical in amplitude and uses it for the power calculations, if they’re not, that’s where the approximation is. You’ve got 4 channels, you only need 3 to measure total consumption, so there’s one free for something else.

If you can clarify what you need/want to measure, I might be able to help a bit more.

My basic plan is to get some monitoring into the church so we can see how much of the Solar PV they have they are using and how much they are exporting. My overall goal is to help them use more of their PV - potentially for electric heating.

My initial thought was to put an emontx / emonbase / emonPi in to do the monitoring, but it being 3 phase has thrown me slightly. Also, they have 2 inverters and about 25kWp of PV.
I’m not looking for the most accurate results, but more to get an idea of their usage.

If it helps, I have attached some photos.

Any help would be much appreciated. 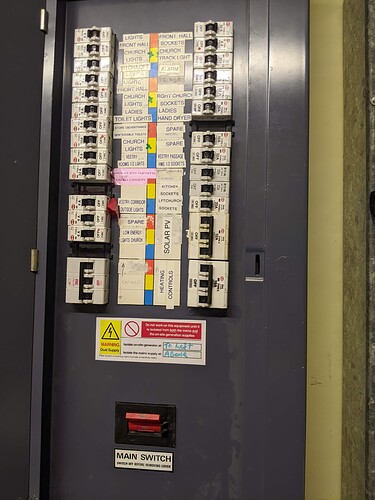 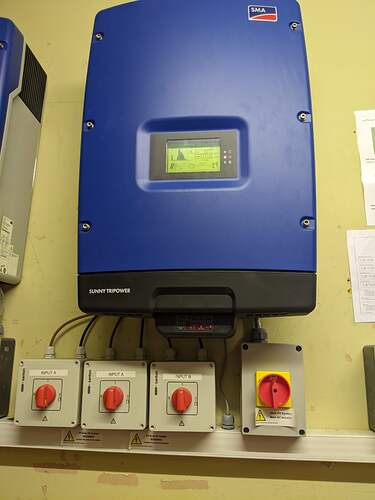 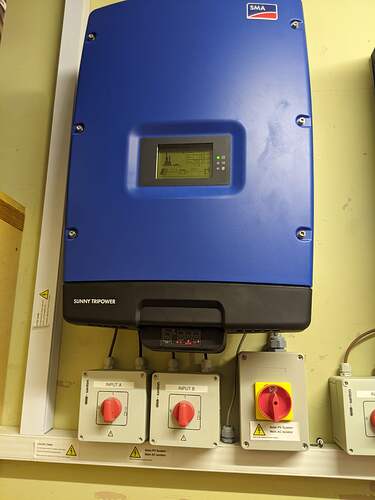 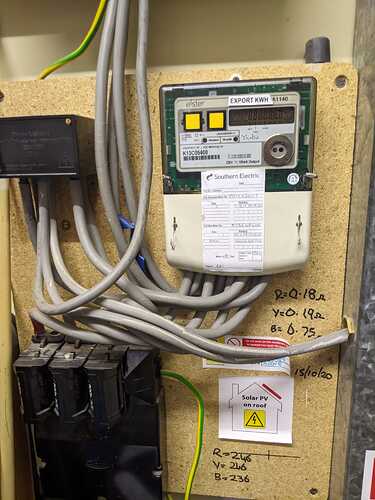 The photos are a big help.

I think I’d suggest waiting for the 3V6I version of the emonTx V4 for the church. This will give you accurate PV & Grid data on each phase, in 4 boxes (the emonVs, emonTx V4, a RPi running emonCMS and its power supply), and you’ll need a double socket for power and 6 c.t’s probably all 50 A rated.

I don’t see much point in monitoring the inverters separately.

Not knowing how much the church is used and by how many people, I can’t begin to hazard a guess as to how balanced the load is, but “R = 246, Y = 246, B = 236” written on the baseboard makes me think the emonTx V3 sketch would be helpful but not too accurate - if all loads behave as if they are resistive and the voltages are consistent, that’s a 4% error before you start.

If at a later date you want to and you can access the wiring to do it, you could add another 6 c.t’s with the extender board and (say) put the cooker & kitchen sockets on 3, leaving 3 to move around to get an idea of the use of the remaining circuits individually or as groups (only one phase through any one c.t. of course).

@Tim_Meadows The only thing I would add to Roberts reply, is have you checked for the possibility of a modbus or Bluetooth data output or other option for the SMA inverters. There is an emonhub interfacer that can read from an SMA Bluetooth output, Im not familiar with the detail of how it works but it could be a good option for getting the solar data emonhub/conf/interfacer_examples/smasolar at master · openenergymonitor/emonhub · GitHub

@Robert.Wall @TrystanLea Many thanks for your help - it’s been much appreciated.
Lots to think about and plan how I am going to tackle this!

Just to update everyone,
I had another look at the church set up over the weekend, and I think the Solar is 3 phase too, so I presume that means each of the 3 phases need to be monitored for that, as well as the 3 phases for the consumption.
The SMA bluetooth config sounds promising (the inverters showed up on bluetooth), but does anyone know if the emonhub interface can cope with 2 inverters?

The SMA bluetooth config sounds promising (the inverters showed up on bluetooth), but does anyone know if the emonhub interface can cope with 2 inverters?

In theory yes, but I’m not sure if the bluetooth connection has been tested in anger. You don’t need anything special. Any Pi (with bluetooth) with emonhub installed on it’s own (the full emoncms stack is not needed) can be used to test the interface (the data just doesn’t go anywhere).

the full emoncms stack is needed

Do you mean the full emoncms stack is NOT needed?

Another thought…
The Elster A1140 meter that is in the church mentions it has an IEC 62056-21 Port which sounds like it allows you to read meter info via IR.
Is this something that anyone has experience of? I’ve seen there are implementations for RPi to read it…

Pulse counting using an optical pulse sensor is an option if you have an Elster A1140; that model is listed this Guide page that explains how pulse counting works and how to go about using it.

If it’s the export meter, that’s generally OK - because the “import” to that meter is only the residual energy to keep the inverters alive, so there’s a tiny error because that energy won’t generate a negative flash (whatever one of those is

). But the optical pulse count is no good on your main meter.

Generally, the IR port is encrypted and used for setting meter parameters amongst other things. I can’t find a reference here to that particular meter, so I can’t offer a pointer other than an Arduino sketch on Github for the A1100 - which I would expect is similar. (Search for Elster_A1100).

The SMA bluetooth config sounds promising (the inverters showed up on bluetooth), but does anyone know if the emonhub interface can cope with 2 inverters?

In theory yes, but I’m not sure if the bluetooth connection has been tested in anger. You don’t need anything special. Any Pi (with bluetooth) with emonhub installed on it’s own (the full emoncms stack is not needed) can be used to test the interface (the data just doesn’t go anywhere).

I have been running the SMA interface for many years, it works fine and has been very reliable. My EmonPi is so old its a “Raspberry Pi 2 Model B Rev 1.1” so no bluetooth, I use an external dongle and that also works fine.

You can read all the output, daily generator etc, as well as details like the inverter temperature, I use it to see when my poor SB5000 gets to 70c at the heatsink and de-rates in the summer

All you need is a raspberry pi with bluetooth, you can install EmonCMS and try to talk to the inverter with bluetooth feeding into EmonCMS - you should be able to see all the generation and get it into feeds and dashboard no problem.

Then you just need to add consumption monitoring later with your EmonTX3 or the new EmonTX4 when it has 3 phase code available.