Emontx shield and lcd_l2c == freezes, with bad values on CT3

I have already told you where to find physical details of the board, and unless you answer all the questions I ask, I cannot help you.

i tried connected the only the pins a0-a4 and all the pins on the analogue side and pin9 , it worked properly – it turned out to be a cold solider point, when it was inserted in the uno it held it in the perfect position the pin did not touch, unplugged from the board it did,

sorry robert if i offended –

oh there are pin plug in called scl and sda on the opposite side of the uno board, so i would of thought they were unrelated to the analogue 4 and 5

thank you for your help much appreciated…

I would not be so bold as to make that statement. In all the years that I have been in electronics and electrical engineering, in my experience the only predictable property of a dry joint - or for that matter a bad crimp - is that it is completely unpredictable. While what you have written might be true for you this week or this month, I would be happy to say that it would not be the same for someone else, or for you in a year’s time (if you had not found it, of course). (And yes, one legendary dry joint took me two years to find. It was only when the surfaces had corroded sufficiently for the fault to last long enough for me to find it that I did. Before then, the slightest movement when you so much as tapped the case cleaned the surfaces enough for the fault to go away.)

i pulled analogue pin a4 from the emontx which disabled ct4

So dBC was right when he said that the LCD display would be using the same pin as CT4.

Therefore we can safely say that the display that you were using is not compatible with the emonTx Shield, unless the shield is modified.

I’m glad that your issues are resolved.

oh there are pin plug in called scl and sda on the opposite side of the uno board, so i would of thought they were unrelated to the analogue 4 and 5

Ah, OK. They’re just exact copies of A4 and A5 in a more convenient location(*). You can buzz them out with your multimeter if you like, and you’ll see the hole labelled SCL up near the reset button is connected to A5 and ditto for SDA/A4. It makes no difference which pair you use as they both end up at the same pin on the CPU.

(*) On your Uno. On my Mega2560 they’re exact copies of D20 and D21 in the same convenient location. That way shield designers who need I2C access can drop two pins into those two holes up near AREF safe in the knowledge that the Arduino below will plumb them through to wherever the I2C controller lives on that particular processor.

Therefore we can safely say that the display that you were using is not compatible with the emonTx Shield, unless the shield is modified.

Not exactly. The incompatibility is between the LCD display, the emonTx Shield, and the Arduino UNO. On many other Arduinos, the I2C pins live elsewhere (see pointer above). On a Mega2560 for example, the I2C pins share with D20 and D21 which AFAIK the emonTx shield doesn’t use, so there’d be no conflict there.

Those pin functions always overlap with something. The problem with the Uno is that the designers chose a processor with so few pins that they all start overlapping with something you care about. Losing A4 and A5 to I2C is a significant hit to anyone doing lots of ADC stuff, while losing D20 and D21 to I2C is a bit of a don’t-care since there are plenty of other digital pins to be used.

I had to modify the emontx shield a bit for the uno basically pull pin a4 and iscp remove that and install two jumper pins instead on top so I have access to pin 13 pin 11, then i just used existing jumper pins for pin 10 pin 5
added extra parts lcd -l2c, ad5206 (100k), any common pwm 40 - 100 amp found on ebay - the bnc connector is for the traic controller and the cat5 jack are for the pwm each cat5 cable handles 2 pwm boards. if you want more info just ask 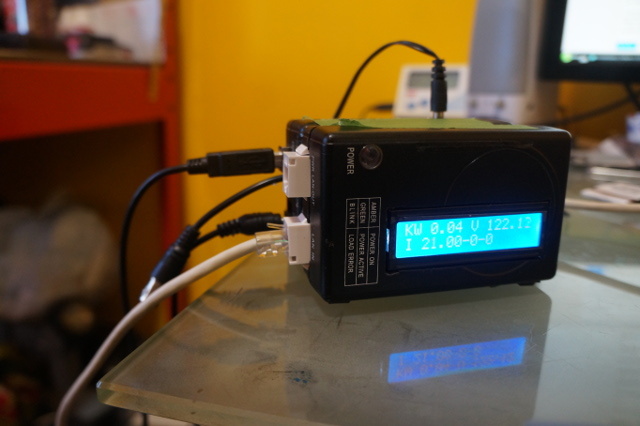