Emontx shield and lcd_l2c == freezes, with bad values on CT3

curious is the the enomtx shield incompatible with a lcd_l2c on a uno board. as it freezes when it reaches lcd init , or do i have to use the basic route of just an LCD screen, – what i/o pins are free on the shield

I know nothing of the LCD, you can find the I/O details for the Shield on the Wiki. You have to go via Building Blocks on the “old” site:

Robert,
If I click “Resources” on the old site’s Site Map, I can’t see anything about “Fundamentals” or “Building Blocks”. And I have no idea about how to navigate to the Wiki …

That is the complete route from here to the Shield Wiki on the old site.

Aha, thanks Robert. I’d never have worked out that linkage on my own.

I think the Arduino Uno uses A4 and A5 for the I2C bus, which is also used as analog inputs for the EmonTx shield, so it would seem the EmonTx shield is not compatible with any shield that uses I2C (at least on the Uno). 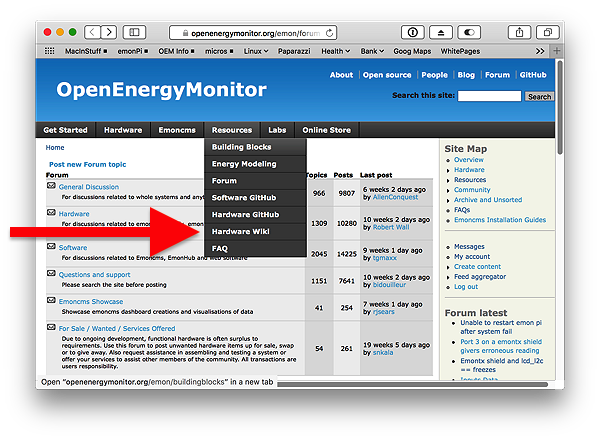 So why isn’t the Shield listed under Resources directly on this forum, when most other things are? Whichever way you look at it, it’s not clear and old hand Robin has found.

hi i bought a emontx shield and it seams to gives erroneous reading
example:
I think it has probably a bad resistor on port 3

What do those numbers mean? I have no idea which sketch you are using.
Please read the FAQ, because that tells you what you need to tell us so that we can help you.

It would be helpful if you put all 4 CTs on the same cable and told us what current, power and voltage you expected to see. Have you swapped CTs between channels - does that reveal anything?

Why is your voltage only 120 V? What is your nominal mains supply voltage?

What does Input 3 read with the CT uplugged? (You should see the values slowly decay to zero.)

It might be the CT’s burden that is missing or open-circuit, but I rather doubt that you would get numbers that big even so. But it’s easy to test. Look at the pcb immediately behind the CT’s socket, and you should see a pair of holes for a wire-ended resistor, and between them on the other side of the pcb a SMT 33 Ω resistor, R17. Is the resistor there? If you have a multimeter, can you check the value? Even if it appears correct, if you have any small (i.e. any value below about 300 Ω) wire-ended resistor, or even a wire link, temporarily insert that into those holes and see what happens. If the numbers fall to a “sensible” value, by that I mean significantly less than 6000 (zero for the link!), then it looks as if that is indeed your problem. If not, I’ll have to think again.

I notice you’re the same poster having compatibility issues with the emonTx shield and your I2C LCD shield. Were the above measurements taken with the LCD shield connected? If so, do they get better when you remove it? If so, see my reply to your other thread (I don’t think the two shields are compatible at least on a Uno).

Threads merged, as it would appear to be the same problem.

humm not really the same problem not sure why you merged it, perhaps related as i get the bad reading on ct 3 even before trying the lcd _l2c as i just wrote a program that was operating on the remaining working ports…
lcd l2c only uses 4 wires - 5v, grd, scl and sda-- no a4 o5 involved and was curious if the lcd -l2c is incompatible with emontx shield

the 6000 value is the same with ct plugged in or not, all it does in fluctuate around the 6000 range by 10 - 20 % and never decays to zero
I compared it the resister value where you said and it is relatively close to the range of the other ones +/- 33.3. I also tried a second resistor inserted 33 value same reading does not change

If the same person is having two problems with a common piece of hardware, it makes a lot more sense to me to have them in the same thread, so that everybody sees the full picture.

I had no idea where in the world you were, hence the voltage question. I’m assuming all the time that you haven’t altered the sketch in any way.

With the Shield_CT1234 sketch, you say the CT3 power shows around 2000? Which ac adapter are you using?

What power value do you get with the Shield_CT1234 sketch with the Shield absent ? (You’ll need to comment out the rf12_… and send_rf_data… lines, else the sketch will hang.)

With the Shield & CT connected, does the voltage on the burden resistor sit at around 2.5 V d.c?
The software filter should take out the d.c. bias whatever the voltage the input sits at, but this would be a final check.

lcd l2c only uses 4 wires - 5v, grd, scl and sda-- no a4 o5 involved and was curious if the lcd -l2c is incompatible with emontx shield 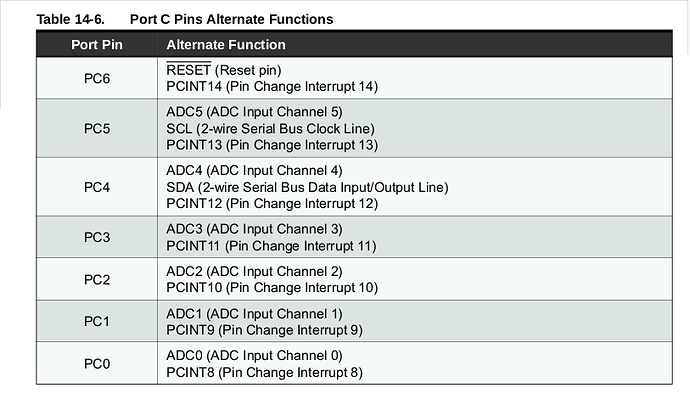 Those two shields may well work together if you choose an Arduino that has the I2C pins somewhere else. That’s not an iron-clad guarantee, you’d need to check all other pins usages for conflicts before you commit to replacing your Uno with something else. But one thing is for sure, an Uno can’t do any I2C (not just LCD shields) when it’s hosting an emonTx shield.

But you’re right… if there’s nothing connected to SDC and SDA then that can’t be the source of your bad readings.

okay i check the traces they seam fine i can not see any thing visible wrong, and when i check for continuity from the burden resistor to the corresponding analog pin it say it fine… would there be a pcb layout for this board somewhere, as it would be easier to track the traces.

perhaps one of the other grouping of cap resistors are bad for ct 3 i tried to check thier reading but i get nothing … it just zeros out , I guess how they are . configure make it impossible to check.

what the bare minimum pins require to boot this board.
I assume a0- a4 ( as 5 appears not to be used) and 5v and ground and pin 9 for the led . i will try that and just swap positions for ct 3 to ct 4 and if the fault move to ct4 position then we know the fault is hardware.

thanks dBC i did not know that, so as it appears a5 is not used, if ( i had fully working board) all i would need to do is cut the trace, pull pin for a4 or remove the burden resistor and then l2c would work by disabling ct4