I have a Emon Pi and EmonTx V3 on order (Australia)
I want to mount the EmonTX in the electrical meter board, and the emonPi somewhere else.
.I want to monitor solar PV with the EmonTX sending data to the EmonPi, However, I don’t have a traditional setup. I have 16 micro inverters.
The 16 solar panels are in two arrays (2 x 8 panels each array) with a micro inverter on each solar panel. This means there are 2 x 240 volt feeds from the solar off the roof to the electricity meter board.
Each string is on its own switch in the meter board. So in essence, I have two solar feeds to monitor.

I was hoping to install the EmonTX in the electrical board, with:

Question:
Can the two CTs on each of the solar feeds be used together to monitor solar PV creation? And log this data to the EmonPi? Or does this “break” the “standard” setup and cause me problems with charts/graphs/calculations etc. 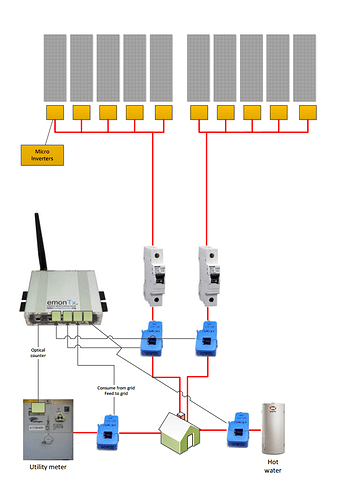 Please attach your diagram to your post. (keeps it from being dependent on a third party site)

Thanks, I cant find the attach button ? Will have another look

It’s the up-arrow with a small horizontal line beneath it, in the post editor tool bar.

(Be careful, the language police will be here soon to tell you it’s not a “CT clamp” …

Anyway, your set-up sounds fine as such, just remember that CT4 on the emonTX is a “high sensitivity” input and should be used for whichever circuit will not exceed 16-18A. As you only have 8 panels per circuit this is fine for either.

In the set-up you will have to remember to sum the two solar inputs whereever in the normal set-ups you only refer to one input.

All my CTs are on an emonTX as I also have more than the emonPi would take and the 9V input powers the emonTX too. The emonPi is a glorified optical pulse counter at the moment.

Thanks Peter, what’s the correct term for a CT Clamp please?

If you had the choice to use the sensitive CT4 input, where is this best used? Monitoring import export between grid and house?
Or solar generation?

My solar is a 5kw system. Looking at data from past 12 months efficiency never gets above 4kw (some shading issues).

What happens to emon Tx or Pi if solar gen goes about 4kw?

If you only need one CT (“Current Transformer”) for the solar then just avoid CT4 unless and until one of the feeds will need more accuracy below a certain (I don’t know what that is!) level.

My 19 panel system is on three aspects and while the panels are rated at 285W, the Enphase M250 micro inverters max out at about 255W, which is fine as the panels will drop about 3-4% in the first year and about 0.75-1% in subsequent years. I’m in the UK so cold sunshine gives the best results - hot days lower the efficiency of the panels and I will get short peaks of 4.4kW in cooler months, while 4kW is about the max in summer.

Shading is what micro-inverters are great at, so just leave them to it

So, where I have an EVSE (car charge supply), you would have the heating diverter. All works fine with the default-ish apps as long as you build the right processes for the inputs.

Oh, you may want to ignore (set to zero) any solar input below about 2W per panel (mine is <40W discarded) as there can be enough noise between CTs that the solar appears to generate overnight otherwise.

If you haven’t got / paid for the Enlighten “Managers” interface that shows per panel stats then it may be worth the $250 or so they sell it for. If you have an Envoy-S (the newer square one) rather than an Envoy-R (the pill shaped oval) then you can get per panel stats for yourself without that interface using the v1 API - you just need to consume the JSON data and there are a few blogs about it. The Envoy-S v1 API is accessible using the default password of the last six digits of the serial number - the older unit, not so much

Guess which I have… sigh.