So, I’m sure I read somewhere that a couple of AA’s would run an emonTH for, like, years.
Well, here’s my record so far. First set of batteries, so I’ve put new ones in and we’ll see how long this set lasts, before I decide the unit has a problem. Or is there something I should know? 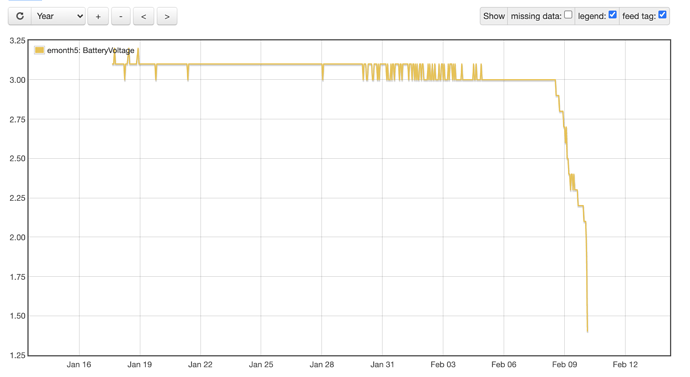 Hi Sean. Hmm, that does not look right - we’ve had units running for many years on the same set of batteries. Worth checking a few things first: did you get your emonTH from the OpenEnergyMonitor Shop? Have you changed anything? Do you have any external sensors connected?

That’s roughly about the same as I got from a couple of well-abused rechargeable cells. The life will of course depend on the quality of the cells and importantly, the discharge rates they are designed for. So cells designed for (say) digital cameras and the like won’t necessarily give you the best life in an emonTH2

There’s a lot of information at https://batteryuniversity.com

Hi Gwil,
did you get your emonTH from the OpenEnergyMonitor Shop?
Yep - in the new year just
Have you changed anything?
Nope
Do you have any external sensors connected?
No.
I have it in my greenhouse - I thought there might be a long-term humidity problem, but it looks just the same inside and out as when it arrived. AA’s are Kodak ‘Xtralife’ Alkaline.
We have had quite a spell of temps around 0C, although I don’t think that’s cold enough to kill them…
I’ve replaced with the same brand today, we’ll see how long they last.

Yea, I assume, being kodak branded, that these are optimised for cameras, charging flashes, etc.
I would still expect to get more than a couple weeks out of them though!

I’ve noticed the Kodak brand batteries sold here in the US don’t last nearly as long as
Duracell or Eveready cells do. A review posted on Amazon makes the same point:

This is a review of Kodak xtralife alkaline batteries and not any vendor. I purchased a package of 36 AA batteries for 10.00. They expire in 2028 so should have lots of life to them. I find that they have about 1/6 the life of a duracell or energizer. As an example I have have a wireless apple mouse and keyboard. Until I started using these batteries I would change the keyboard batteries about once every 2 years and the mouse about once a year. I am on the computer daily. With these batteries I am changing the keyboard batteries about every 4 months and the mouse batteries about every 2 months. I can buy duracell batteries at a whole sale club for around 50 cents each. The Kodak cost around 28 cents each. Even if I only replaced the batteries 3 times a year, the cost of batteries would be 84 cents. Even though the kodak had a good initial cost they are substantially higher in the long term.

Thanks Bill.
Yes, this is unsurprising - although I still expected to get more out of them in the emonTH, given its very low draw.
I usually use Duracell Industrial (the orange ones), but ended up with a drawer-full of these, for some reason. No matter - looks like I’ll be getting through them quick enough!

Looking back at the history of 5x emonTH2’s I’ve had a while now, one of them has performed well - 3 years and counting. This one happen to have spent most of its life in short range of the emonPi base. The others are further away and typically get 20 months per set of AA Alkaline batteries. All have the same settings, ID adjusted by DIP switches apart from the fifth one which needed its ID set via Serial cable.

The most likely explanation is variation in battery quality. That said, is there something in the RF code which alters transmission power depending on distance from the base?

That said, is there something in the RF code which alters transmission power depending on distance from the base?

No, JeeLib always transmits at +7 dBm, the same power for the RFM12B and the RFM69CW.

LowPowerLabs does implement that (I believe, by ‘handshaking’ with the base) but that would mean changing your whole system over, as the two libraries have different data formats and quite different data rates. And I don’t think LPL works for the RFM12B, so if you have any of those, they would need replacing.

We have been running two emonTH units indoors (industrial unit) since mid November using RS Components ‘Pro’ Alkaline cells and the voltage has so far dropped from 3.1V to 2.9V.

My emonTH runs for ever it seems on one set. I don’t even bother logging the battery level.

Well, it seems very likely that it’s a battery issue then. I’ll see how the 2nd set of kodak cells get on - and then I’ll put something decent in there!

I personally have found every set of batteries used on emonTH start to leak as they report 1.3V or less. So when yours get to that sort of level, double check them. I stopped using Duracell because they were the worst offenders but JCB branded & CPC Farnell own-brand “Pro-Elec” are also prolific leakers!

I stopped using Duracell because they were the worst offenders

The normal ones or the Ultra ones? I’ve not experienced a leak TBH - I always use the Ultras.

This post on self-discharge rates might be useful if you want rechargeable:
AA Battery Considerations - Blog | OpenEnergyMonitor

An other thought, looking at that graph, I wonder if the EmonTh somehow crashed in an on state on 8th of Feb, seems to drop precipitously, the voltage was also nice and high when it started to drop…

The only leaks I’ve had were with cells that had been dead for several months.
Otherwise, they aren’t any better/worse WRT leaking than the Eveready product.

I’ve found both regular Duracell Coppertop and Duracell ProCell to be leakers, even when in date. So much so, as they have similar lifespans to cheaper batteries, it seems pointless paying the extra for them.
YouTuber Dave Jones is running a long term leak test on various brands of Alkaline battery brands to see which are the worst offenders. Should be interesting. 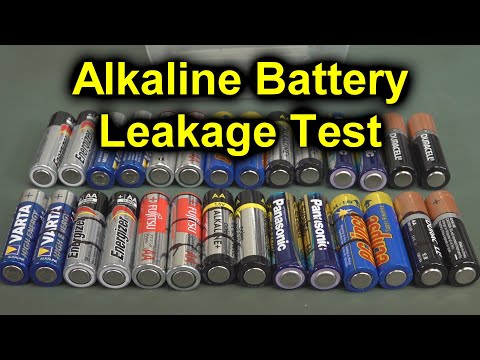 Well, that’s a good thought - so I took an early look, and this is the result.
We seem to have an issue… 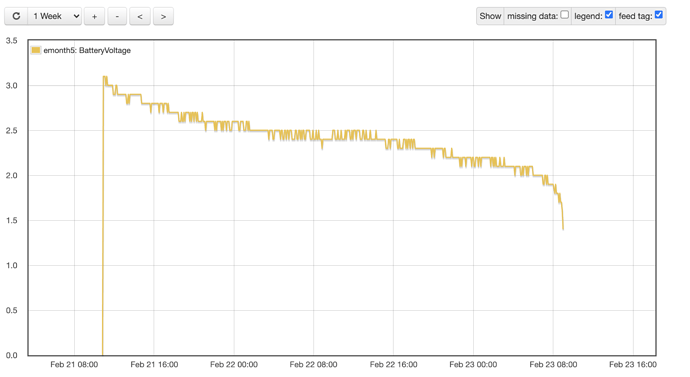