Been using the EmonPi for a couple of weeks now. It’s great. So easy to setup and i really like the CMS graphics, opens up a whole new world of data I didn’t know I had!

Just one strange thing thats happening. If I move my EmonPi the little screen on the front often gets garbled. I mean the text turns to random characters. I can still scroll through the menus, and i can see the letters changing, but the are random. I have to re-boot, then it’s all ok.

Something wrong, or is this sensitivity normal?

Hi Pete, Possibly the cable connection between the LCD screen and the emonPi board is moving about causing a bad link. If it is a hardware fault you can email us at [email protected] and we’ll organize a replacement.

I have this too with my emonpi. As long as you don’t touch the casing, everything is OK. If you only touch the button for scrolling, the LCD shows normal messages. As soon as I touch the aliminum the LCD shows strange characters. Sometimes (local) emonCMS also hangs. After reboot everything works normal again.

I checked the inside if the wiring to button or display made unwanted contact somewhere, which it didn’t.

Could it be a static discharge from you?

Possibly, probably even. So I prevent touching it…
But still, why would it garble up the LCDisplay?
Would grounding the box be of any use?

why would it garble up the LCDisplay?

If it is a static discharge, you are instantly changing the voltage on the box by a few thousand volts, but the electronics inside is probably connected to earth either directly by an Ethernet connection, or by stray capacitance via the transformers etc, and something somewhere sees a big voltage spike. It has probably corrupted a few bytes memory that don’t get refreshed.
You might find it is weather-dependent (not happening on warm moist days) or dependent on the type of shoes you wear or your floor covering.

Would grounding the box be of any use?

That is what I would do. My emonPi is an early one, things like this can change over time, so you need to check yours, but the metal box of mine appears to have no direct metallic connection to the electronics inside. An earth wire trapped under the head of one of the case screws would be what I would try first.

So I connected a groundwire to the box.
While doing this, I experienced that everytime I let that groundwire touch the box, the LCDisplay scrolled to the next screen. Is that normal?
Now when I touch the box nothing happens. Will try that some more next week…

For what it is worth this happens to me also. In the winter (low humidity days) I can touch the case and the screen will light up - I thought it was a feature!

Sometimes the screen will scroll.

Last year I opened the emonPi case and looked at the PC board, I noticed there are some PCB copper traces too close to the aluminum case. I think there is one trace within the C shaped channel of the case. 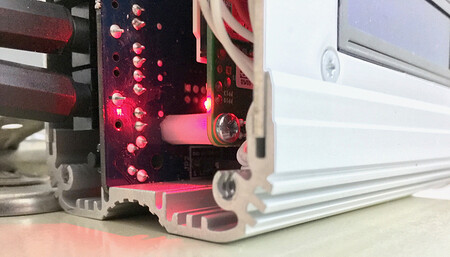 Next time I take the emonPi apart I’ll locate the trace mentioned above.

EDIT: I found the emonPi board and I added two purple lines that represent how the C channel of the case is close to the traces. This is just eyeballing it (not accurate!). 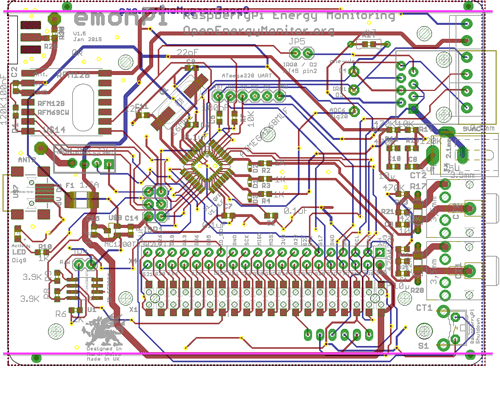 this particular solder connection may not matter since I think it is a ground.

Strange as it may sound, even if it is a ground, it can still make the electronics go wonky if hit by ESD.

So would insulating the board by wrapping a sheet of plastic in this C-groove a good idea? Cellotape?

It may help, but then again if one side of the capacitor (you) is charged to a high enough voltage, it will punch through a thin insulating layer without too much difficulty.

I think @glyn.hudson needs to be aware of this thread.

This is really interesting, thanks a lot for investigating this. I can’t replicate on my personal emonPi, I will try and replicate when I’m in the office next week. The issue might only affect certain emonPi’s where mechanical tolerances or position of the board make contact touch the side. I will investigage

There have only been a couple of very minor changes to the emonPi PCB see change log:

Are all the emonPi’s that are experiencing this issue connected via Ethernet?

Does the issue also affect emonPi’s connected via wifi?

My emonPi is connected to the ethernet. I do not know about wi-fi.