Since updating my emonpi to V9.8.0 I can’t access any of the menu items on the mobile webpage.using an iPhone I’ve tried this on 3 separate phones, and on 2 copies of EMONCMS. The mobile menu expands when I select the top level items, but I can’t select any of the items underneath. I can only select the main dashboard and the logout button.
I can however get to the individual items by putting the full URL such as
http://192.168.8.77/emoncms/config/view into the address bar.
Its only the navigation that seems broken. and It works OK on Windows 10, both desktop and tablet. Both local http and remote https which I’ve just enabled seem aflicted, and at least 1 of the phones would have never seen the system before so that should rule out cache in the phone issues

UPDATE:
I have just rolled the system back to before the update and it works fine, until I click the update button in the web interface, which breaks it again. Log attached for the updateemonpiupdate.txt (17.7 KB)
Is this a known issue @glyn.hudson
Copying the previous /var/www/emoncms directory over the top of the newer version restores the functionality too, so something that is replaced with git pull is breaking the mobile web page

Thanks for letting us know. V9.8.2 (current master) works fine on an Android: 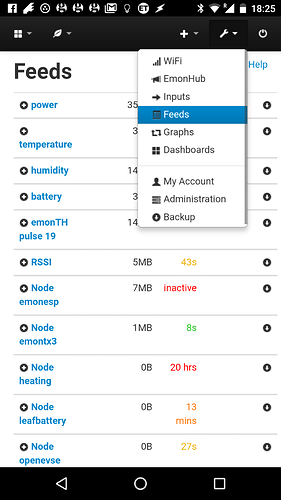 I don’t have an iphone at hand to test, could you post a screenshot?

Any insight into what could be causing the issue?

Does anyone else have an iphone to test

How can I get into 9.8.2 - git pull as of 12 hours ago gave me 9.8.0, although as the navigation is totally different I think the Android one is loading a different style sheet?
The navigation screen in your screenshot is different to the iPhone one which has a single menu with 2 levels, see attached - in the screenshot it’s “My Electric and My Solar” that can’t be selected. The “Extra” and “Setup” tabs also expand but nothing in them can be selected. According to the logs it’s loading “bootstrap-responsive.min.css” and simply replacing that file with an earlier version doesn’t seem to fix it. 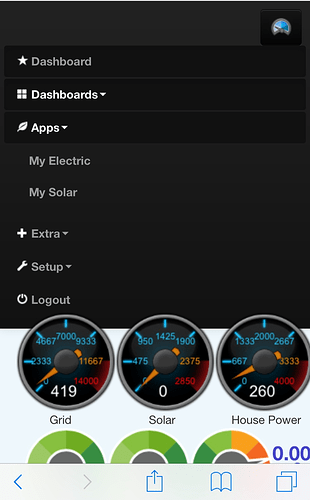 I’m working away this week, When I’m back at the office next week I will dig out an iphone and test. Sorry for the delay.

Out of interest, do you have the same issue if you hold the phone in landscape. What iphone, Safari version and ios version are you using?

Out of interest, do you have the same issue if you hold the phone in landscape. What iphone, Safari version and ios version are you using? 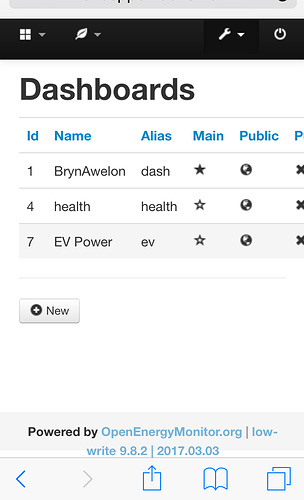 That’s interesting as it seems to be the same template that @glyn.hudson has on his Android, I have a different template on mine which has a single icon on the right - see the picture in post 4.
I wonder how it decides which template to serve? Perhaps my template is obsolete and needs deleting.

Yes, this sounds like the issue. Can you test with the default Emoncms template?

Can you also test loading Emoncms from https://emoncms.org on your iphone? This should work fine.

This issue must be with your installation

How do I get the other template to load? It’s been the single icon template I sent a screen picture of since I migrated to V9.
Emoncms.org is the same template as on your phone and it seems to work.
I’m back on V9.7.7 now and it’s working on the single icon template, so that one stops working when I migrate to 9.8.0.
Has it been retired at some stage and my install hasn’t noticed? What decides what is served to a particular device?

The ‘basic’ theme and bootstrap lib should be included in the default Emoncms core.

Can you check you have the updated template files by running

All done and working - I now have the same layout as you guys. There was a bit of git weirdness, including suggestions I should stash changes which I don’t even remember doing. After googling I entered

and it stopped complaining. I guess something somewhere was changed which stopped the original update from working properly.