Is there a how to install emoncms on Mac OSx (Server) (El Capitan) somewhere?
I struggle with Apple’s characteristics of Apache and gave up.
Currently I’m using MAMP, but prefer using the native apache.
Any help is appreciated.

Excuse the revival on an ancient topic! In case future users were searching, and my own sense of completion

I would follow setup guide for whichever version of OSX one has, for El Capitan I had to update PHP

I then had to install mysql using the community .dmg package from the official website
and with cloning from github the emoncms master (of version of choice) it’s fairly straight forward from there. I did the following:

This is not specific to mac:
Getting as far as the user user-registration page, I had an issue registering a new user.
Log into the emoncms mysql database and follow this.
("Error creating user" at the first register on a fresh installtion · Issue #791 · emoncms/emoncms · GitHub)
I also had to do make this change to the database:
ALTER TABLE users CHANGE preferences preferences TEXT CHARACTER SET utf8 COLLATE utf8_general_ci NULL DEFAULT NULL;

To run the line
export PATH="/usr/local/mysql/bin:$PATH"
automatically on Terminal startup for easier use of mysql, open:
sudo nano ~/.bash_profile
and add it there.

Then open up Terminal preferences to issue a command at startup: 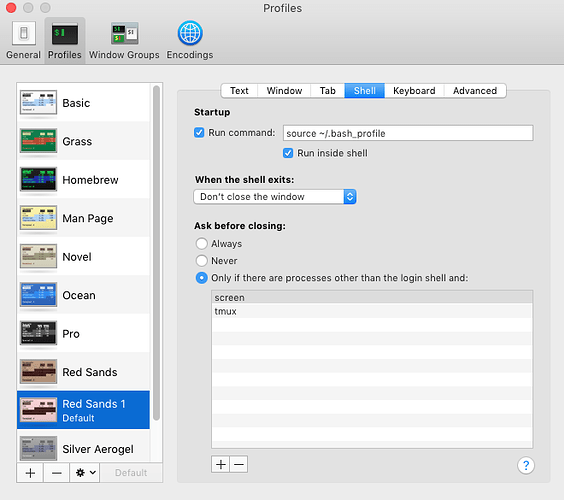 This from the emoncms Linux setup guide needs changing for mac:

The syntax here is “sudo chown user:group /filename”
The user:group in use by the server can be found entering
cat /etc/apache2/httpd.conf
in Terminal.

I needed to change the user and group to _www:_www