Hi everyone,
I live in Australia and our Gas meter is made by EDMI. I could neither get a clear reply from gas retailer nor from the manufacturer (EDMI) whether a magnetic pulse reader (reed switch or hall effect sensor) can remotely detects rolling of the last dial from outside. The meter datasheet (https://www.edmi-meters.com/australasia/wp-content/uploads/2018/03/U8-Factsheet-English.pdf) says there is a pulse-ready magnetic output but I imagine the port is inside the meter and I am not allowed to access that. I checked magnetic field around the last digit using an industrial hall-effect proximity sensor (https://au.element14.com/hamlin/55110-3h-02-a/sensor-hall-effect-flange-mount/dp/5052609) but it didn’t find anything during an entire rotation while I checked it and it detects a small magnet within 10 mm distance.
This is my gas meter picture and I am hoping someone experienced could identify the meter type and its reading approach from the shape of the front meter. Thank you.

I don’t have a feel for magnetic field strengths, but the data sheet would suggest to me that the sensor is not particularly sensitive - the most sensitive version responds to 40 Gauss, whereas the Earth’s magnetic field is ½ Gauss or so. (You wouldn’t want an industrial sensor to be sensitive to it’s mounting orientation, would you?) Do you have a plain old magnetic compass that you could try with?

Good point. I didn’t check with a plain compass as I don’t have any but I will try one and will update the post. Thank you.

Update update! I used my phone and a compass app to detect any small magnetic field around the meter while numbers are rolling. The app shows around 50 to 60 uT which is equal to 0.5 to 0.6 Gauss at normal conditions and pointing to the true north. When I get it close around the meter sometimes it reaches to 1 Gauss (100 uT) which sounds very weak and cannot be from a real magnet. I also took a photo from the meter side which shows a rolling cog having a piece of metal on that but I am not sure if it’s a magnet as if it was the compass should have detected stronger magnetic fields. Having said that I tested the compass app with a small magnet and it shows easily more than 10 Gauss while within 20 mm of the magnet.

I used my phone and a compass app to detect any small magnetic field around the meter while numbers are rolling.

That is interesting. What app did you use?

How close is that piece of metal (at its closest) to the red oval shape I can see on the other picture - and is that red thing a plug filling the place where the manufacturer’s own sensor would fit? If the piece of metal rotates on its shaft once per 10 l, then I think it’s a near certainty that that’s where you need to put a reed switch (which is mentioned on the data sheet).

To be honest, I’m not surprised you didn’t get a positive result with a phone app, because you don’t know where the magnetic field sensor is inside your phone. And the distance between sensor and magnet is crucial - I seem to remember it’s an inverse cube law (but I’m open to correction here), whereas the phone’s sensor expects to be working in a fairly uniform field - the earth’s.

Thanks Robert. I checked the phone’s sensor with another magnet and it’s definitely located at the phone’s top as it quickly reacts to approaching even a small magnet within 20 mm but anyway as you said the field weakens proportional to square of distance. And yes the oval red cap is the Utility sealing and obviously the piece of metal or magnet gets very close to that when it passes its highest point. But still I am wondering if utility fits a reed switch into that cap for meter reading, the piece of metal should be a good magnet creating more magnetic field than that I measured. I am coming to this conclusion that the only way for this one probably is optic reading as at least there is a small mirror on number 6.

And it looks as if the red cap definitely won’t come out?

There are comprehensive details of an optical sensor in ‘Learn’, contributed anonymously.

I haven’t built it, but the design looks sound and the contributor had confidence in its performance. The big problem will be ambient light. Provided your meter can be shaded (I see dappled sunlight falling on it

) then I think it should be OK.

@babakr Any updates on your findings? I am in Australia and have the same meter!

I ended up putting away the magnetic reading method and switched to optical reading using the mirror located on the last dial.

How did you get the optical reader to detect the dial through the thick plastic casing separating it? I was thinking I would have to wrap it all in black material to block out the light coming in the sides.

Like that but I have another type of meter. Anyway, you see the challenge!
The sensor is about 5mm away from the reflective number (6). 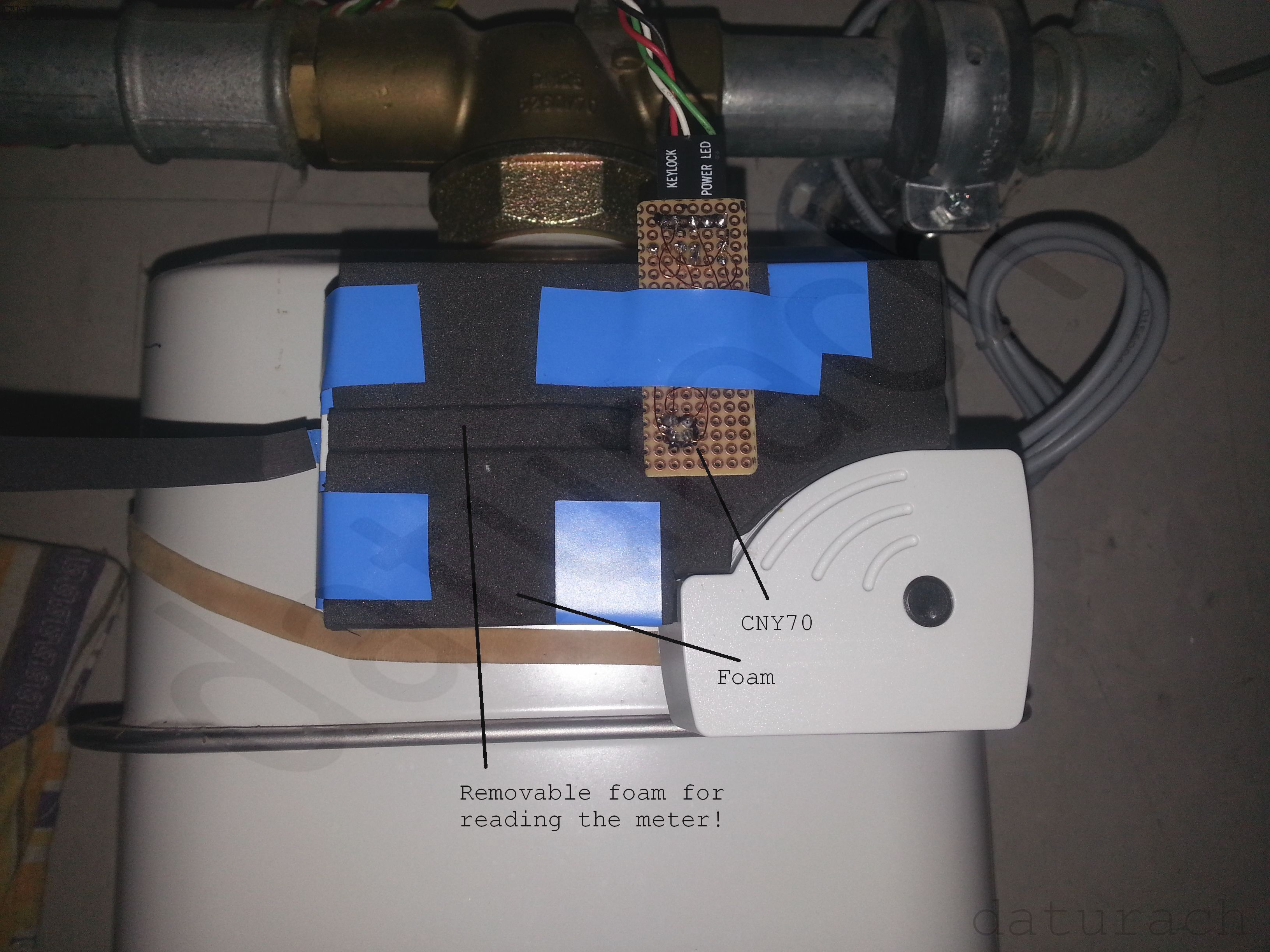 I used OPB732 long distance reflective switch which works up to few inches but it uses a lot of power for light transmission which makes a battery application almost impossible but I have used a power switching method to power the LED with a low duty cycle (short ON and long OFF time) given low speed of dial rotation (of course I haven’t done final tests yet).

Thanks guys so @babakr so you are using the OPB732 module connected to an arduino board like an ESP8266? Do you have to cover it over in black material like daturach?

Did you ever try a magnetic reed sensor like the one in this video?

@Mike_Anderson I haven’t used Arduino yet and only designed a proprietary analog circuit to detect the output signal as it has a switching output with different levels. Once I get the clear and filtered digital signal I will pass it onto a digital chipset for counting. About covering, to be honest I am at the middle of the tests and will post more info down the track. I watched the video you posted and it shows a reed switch as a magnetic pulse reader but in the gas meter we are talking about (and many others) the main issue is either there is no reliable magnetic pulse or you need to break the sealing to access that. Actually gas companies are extremely reluctant to allow users to approach and play around their meters that’s why they try to restrict all possible ways.

I forgot to mention it but it’s pretty obvious I am the only one having access to my meter. It is equipped with a radio link sending encrypted data. From time to time, I can see a car parked in front of the houses collecting data. Sooner or later, the battery will have to be replaced and they will probably change the meters.
It looks like this is going to happen before 2027…