Does my meter support pulse monitoring?

I was wondering if my meter would support pulse monitoring. It looks like there are two LED lights on the front sitting recessed in some keyway (there is a slight notch at the top). Does anyone know if this unit would be compatible with pulse monitoring? I’m not sure what the two LEDs are and how that would effect. I am also concerned that the keyway around the LEDs would not allow the device to position correctly. Any suggestions would be great. 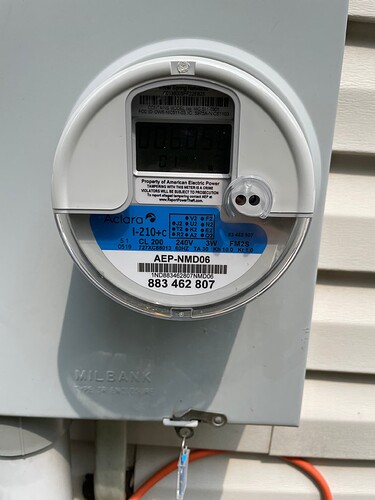 I’ve looked at this I-210+ and I-210+c | Aclara Technologies LLC and https://www.aclara.com/wp-content/uploads/2020/10/Aclara-I-210c-Residential-Metering.pdf and there’s certainly no mention in there, nor any mention on the front of the meter, that there is a LED pulse output, so I would presume that what you can see are infra-red LED and receiver for two-way communication with the meter. One way to check would be to use a digital camera or smartphone (many of which are sensitive to infra-red - check with the TV remote control if in doubt) to see if there’s any activity visible.

If you have PV and you generate enough to export, then a pulse output probably won’t help you anyway, because it’s most likely to either not indicate at all during export, or you’ll be unable to distinguish between export and import.

Thanks for the response. I went out and recorded a video of it for 5 minutes while our air conditioner was running and didn’t see any lights at all. I’m not sure how frequent a pulse would be but we were drawing significant power during the time.
Either way I don’t think it’ll work as the plastic ring would conflict with the placement of the pulse sensor. Too bad but I can still measure with a CT.

I’m not sure how frequent a pulse would be

I can still measure with a CT.

You’ll need one on each 120 V leg of your supply, of course.

I do have two legs of 120V and one single neutral.
I thought I could just put one sensor on the common neutral to measure everything. Is that not true?

I thought I could just put one sensor on the common neutral to measure everything. Is that not true?

That is very not true - you will measure the DIFFERENCE between the two legs, not the sum. and it’s the sum you want.

Think of a 240 V load (such as your aircon) – if your meter measured only the neutral, you’d have free power because there’s no connection to the neutral.

Well awesome. Glad I asked because I was only going to buy just one of the large CTs. Thanks for all the information!

On that “Use in North America” page, we do show two c.t’s for a reason!