Our Charger uses Open Charge Point Protocol (OCPP) version 1.5 over JSON, do you think this could be intergraded in to the system?

I’ve never heard of this OCPP Protocol, can you elaborate more on this?

I don’t know much about it http://www.openchargealliance.org/

Sorry Paul, you need to do better than that!

GitHub - NewMotion/ocpp: Open Charge Point Protocol perhaps that help you along it also point to other references

I’ve been reading about OCPP - thanks paul for that, i had no idea what it was - and it is not Open like Openenergymonitor, it’s open for the companies that what to be part of it.

I found no server, and no implementation ready to test, it’s all about the possible messages that a unknown central server makes to the charging station. Actually V1.6 can also change pilot signals, however only V2.0 (draft) brings full encryption and that seem really late.

Using a Solar Cell to Control an EVSE (via the EPC)

I have not read all the way through this thread so forgive me if the subject of this post has already been mentioned or is not relevant.

People trying to match their EV charging current to their PV output (to minimise exported energy) may wish to consider using a small solar cell in proximity to the EVSE with a reasonably clear view of the sky. On the basis that the solar cell will be illuminated in approximate proportion to the PV array and at the same time (roughly), this may be a lot easier to implement than other methods especially when the EVSE is remote from the PV and/or its control electronics (ie a clamp-on inductive-type sensor is inappropriate/too expensive).

It would certainly be a useful addition to what has already been submitted here if one were interested in using the Viridian (Mainpine) EPC which I sell through my webshop at EVBitz.uk (related plug so I hope it doesn’t upset the moderators).

I understand your point, however in my opinion the best way is to have a remotely controlable EVSE, like the one i’m developing here (EVSE Colaborativo - Clubeletricos.com).

With this EVSE, the integration is direct, since it talks the same language as the IoT platforms like Node-RED. To make everything work we just need a bidirectional energy sensor and a raspberry pi ( a emonPi) and we’re set.

There are other EVSE that can change Amps, instead of adapting a solar cell to change the current based on the intensity, maybe it’s easier to adapt a ESP8266 to control the amps and provide remote control via WiFi. OpenEVSE is a great example of this approach. It should’t be hard to integrate ESP8266 with the Viridian EVSE.

This only works if you can assume that all the solar is there to be diverted. In my set-up I am only diverting - or trying to - the spare solar that is not already being used in the house, i.e. what I would otherwise export.

The above link is to my first build of a ‘surplus power’ charger using your Viridian EPC and a modified emontx v2. It worked very well and I even got several enquiries as to whether I would build a commercial version. It’s a very accessible solution for the electronics DIYer.

Recently I invested in an OpenEVSE unit as it is more customisable. My new EVSE will wait until the Tesla Powerwall home battery is 90% charged before charging the EV using surplus solar. I’m also going to include an Economy 7 mode. I’m almost there - Node-RED was a learning curve!

Thanks for the update. I hope it goes well and let me know if you do come up with a commercial version as I have had a fair amount of interest from people wanting this sort of facility. So, I would be interested in selling it.

Hi Stuart, great build, can you please explain how the power pack delivers energy to the consuming equipments?

We have been busy working on a significant update for OpeneEVSE Wifi which now includes full in-built solar PV diversion capabilities i.e. all diversion calculations are made on the ESP unit inside the OpenEVSE, nodeRED is not required. The solar data comes from an emonPi via MQTT.

Solar PV divert can be enabled by selecting Eco mode in the UI web page.: 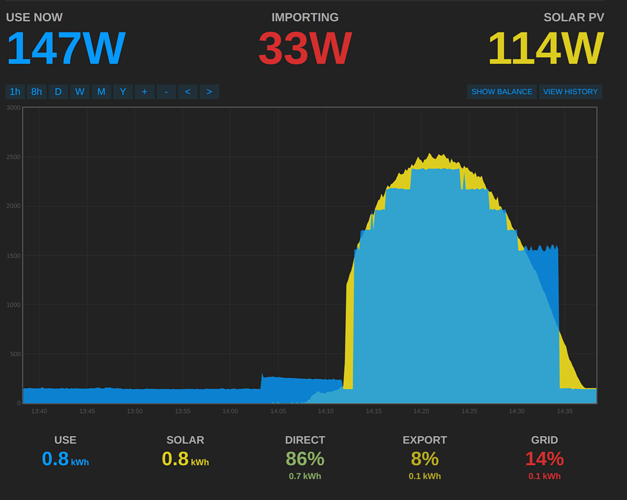 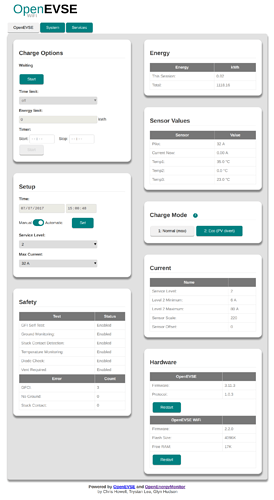 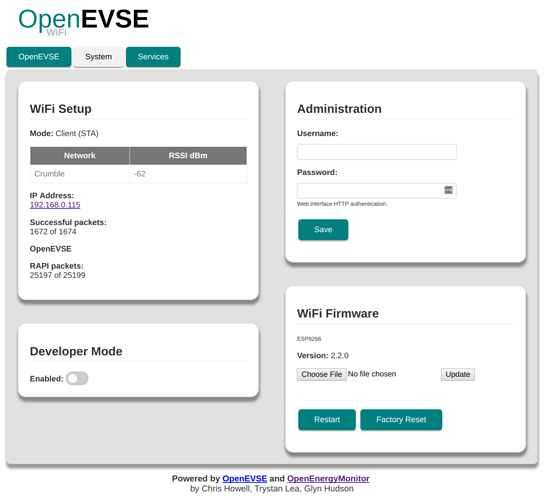 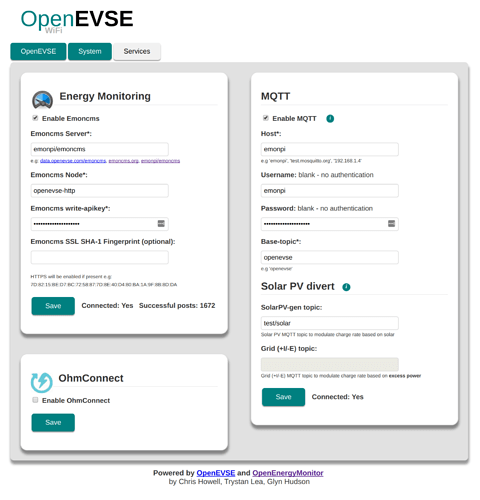 We are keen to get some real work testing from other users, if your interested please see thread:

I have been working with @jeremypoulter with input from @chris1howell on a significant update to OpenEVSE WiFi firmware. The OpenEVSE (with WiFi option) use an ESP8266 to post data to Emoncms and control the OpenEVSE via the RAPI protocol. Here are the main changes: New web page UI to control OpenEVSE functions, settings and status etc. Lots of general UI improvements Solar PV diversion (select Eco mode to modulate charge rate based on solar PV output) RAPI over MQTT - control all functions … 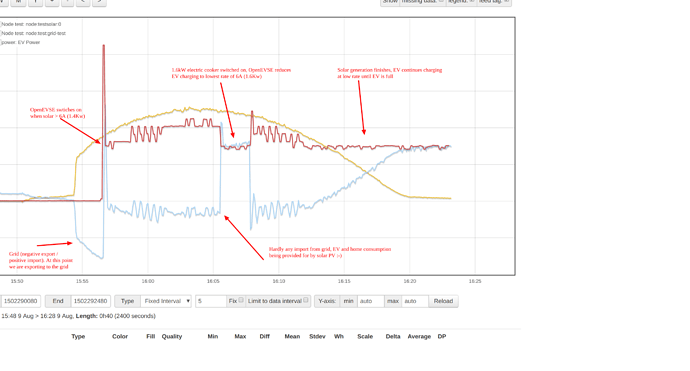 I could add some real life scenarios, however my graphs of solar + consumption + EV charging are kind of ugly. Anyway i started browsing my emoncms history and found this one i’d like to share with you: 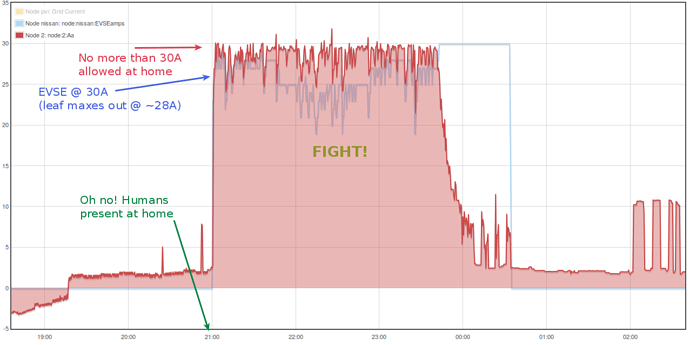 Finally i tested my solar algorithm and it’s actually not that good:

The algorithm is optimized for the maximum power, so everytime the power is above threshold the EVSE reacts. If the power is below the threshold, only 1 EVSE change/min is allowed. I’ll change the behavior for solar mode and report back the changes.

Now there is a question i haven’t thought much and maybe you guys could help. Since the car charges in 1A steps, in the [ -1A, 1A] range would you prefer to let go and inject and never import or would you prefer to consume a little from the grid and make sure to export nothing?

Random ideas from my own EVSE control stuff;

The second one works now, the first is just some extra work from a previous incarnation of my node-red flow.

Not sure if these are useful, but they work for me

Thanks for the suggestion. Yes, both your suggestions make total sense. I’ll add it to the do-to list. Although it sounds like someone like yourself would be batter controlling the OpenEVSE Via RAPI over MQTT from a nodeRED flow to have total control over the unit. It sounds like this is what you are already doing! For the benefit of others here’s am example node-RED flow to control the OpenEVSE divert via MQTT: 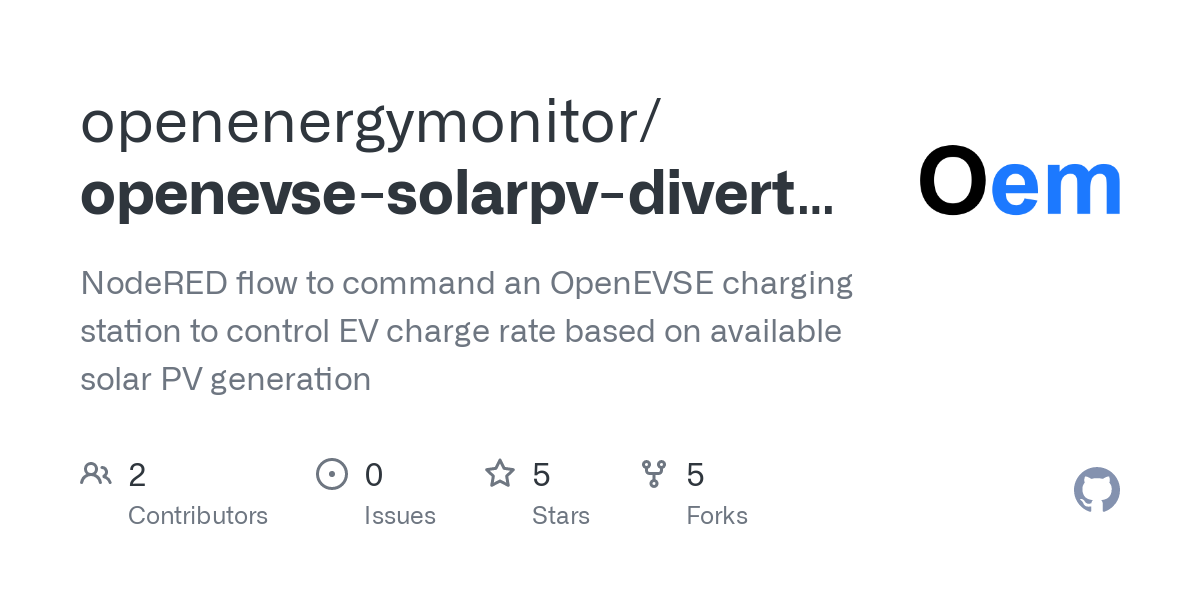 Yeah, but my EVSE is an ABL Sursum one with an RS485 port, which I drive from a USB adaptor in an RPi3 (in a waterproof box outside)