I thought you might be interested to see some exciting spikes in the “outdoor temperature” measured by the on-board sensor on our heat pump (in blue). The heat pump is tucked up against the house and so there are only a limited number of times the sun can get along the house and shine on the back of the heat pump. I’m comparing it to a pretty bog-standard weather station sat about 5 metres from the heat pump in the open garden (in gold). 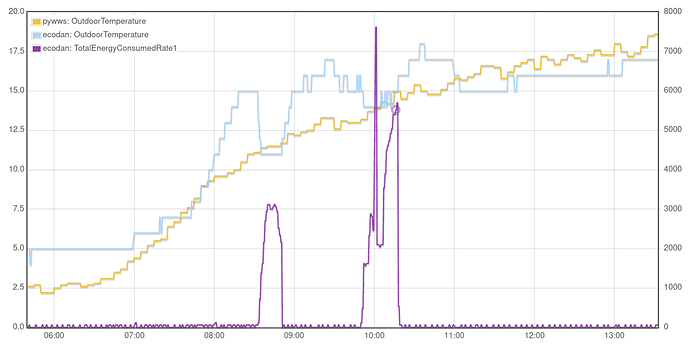 The purple line is there to show when the heat pump turned on (ignore the crazy spike at exactly 10:00).

So we can see it was genuinely getting warmer quite quickly from about 06:30. The heat pump shows a much more vigorous rise around 08:00 than we might expect. It quickly falls back down as soon as the heat pump kicks in and alters the micro-climate around the heat pump itself. In fact, it goes down to about the ambient temperature.

I can imagine this causing some excitement with weather compensation if the local temperature from the heat pump is being used. I’m tempted to say it doesn’t matter so much because it’s not really cold, but I could see it causing some wild fluctuations in these shoulder months.

For those of you running continuously, are you avoiding this behaviour because you have a steady-state of the air moving around and so the micro-climate can’t build up to something interesting?

I don’t see this effect as my heat pump is situated on the north end of the house so never gets any sunshine. The temperature from the manufacturer’s sensor seems to match that from the local weather station reasonably well, except during a defrost.

While looking into getting a heat pump, I did wonder if installing it in a sunny location would be beneficial, but I could not find any sources that supported that idea. In fact, I only really found warnings about the detrimental effect sunlight could have on some of the components, shortening their lifespan. [citation needed]

Ours is sited facing west with a wall a short way south. It gets late afternoon sun, which can be a nice boost of a couple of degrees, then the fan starts up and the temperature falls back down and it doesn’t seem to get warmed for long enough to disrupt the weather compensation enough to cause problems. It doesn’t run continuously, but it does run for hours at a time in cold spells.

It turns out that snow settling on the sensor is a bigger effect, I discovered today!

Do the Mitsubishis you all have hold the temp sensor inside the monobloc?

I believe on the Nibe it is an external sensor on a cable. Which allows placement away from the main unit?

Mine looks to be attached to the back of the unit, via very short wire: (I assume this is it) 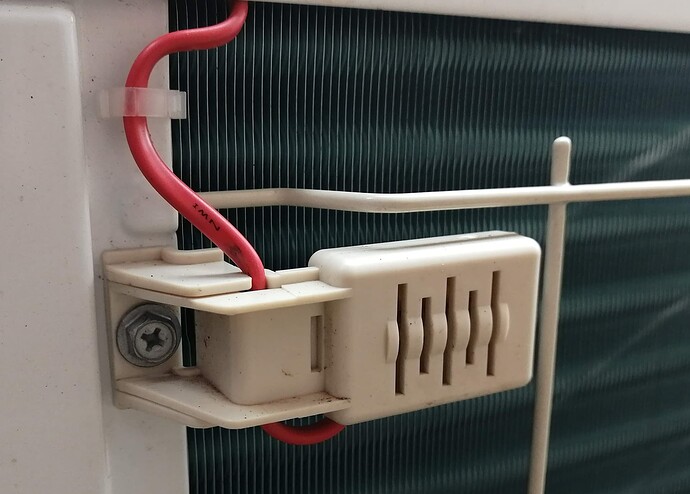 I guess you could cut it off and extend the wires, but not something I’d want to try.

Easier to use an external sensor or data from a local weather station.