Design guidance 3-phase house with lots of circuits to monitor

I’ve been following the EmonTX v4 thread with interest ( AVR-DB: emonTx V4, new hardware in progress) so rather than pollute that thread I thought I best start my own.

I have EmonCMS running on a Pi (remote from consumer unit) with the RF module to communicate with an EmonTX v3 currently. I’m running the single phase continuous monitoring firmware (so not not optimal for 3-phase accuracy) and I’m mainly using it for monitoring my solar generation (pulse via meter) and sporadic monitoring of the individual phases (I monitor overall power usage from the meter with a Glow in home display via MQTT).

I’m hoping that I can monitor my loads with the EmonTX v4 to give better insight into my power usage, I would appreciate others input/suggestions whilst I’m still at design stage!

In total I have 30+ individual circuits so am trying to decide what to monitor and whether I should/could run multiple TX4’s.

Will it be possible to connect multiple TX v4’s to a single emonVS if I want to go beyond 12CTs?

Should I stick with RF communication or will I have issues with multiple EmonTX’s?

Any other suggestions welcome whilst I’m trying to rationalise my monitoring requirements.

Finally, any insight into the availability of a 3-phase firmware for EmonTX v4 (even if it’s beta) would be great.

Hello @Dan_Nichols thanks for your interest.

It sounds like perhaps in your application 3x EmonTx4 running the standard single phase firmware with the first EmonTx monitoring solely on phase1 the second phase2 and the third phase3. I have thought a small adapter board that is placed between the single emonVs and the 3 emontx units could make this possible. It’s not possible to have multiple emontx units connected to the same voltage channel on the emonVs but as long as each emontx is connected to a different channel it will work fine.

I will try and get a prototype of that adapter board made up. I think it would be a neat solution. That would give you 18 CT circuits as a starting point, 6 on each phase.

This first release of the single phase firmware caters for up to 6CT channels per EmonTx, that has been our focus for now. I do have prototypes of the additional 6CT extender but it’s a little way further down the line before it’s an option in the shop.

Should I stick with RF communication or will I have issues with multiple EmonTX’s?

Personally I’d communicate via Wi-Fi - there have been a number of issues reported with multiple RFM69 comms going on at once. There should be several means of doing that (hopefully). I currently have a WEMOS D1 Mini setup and doing the comms from a TX4 (prototype).

This is running ESPHome and a prototype ESPHome Component. 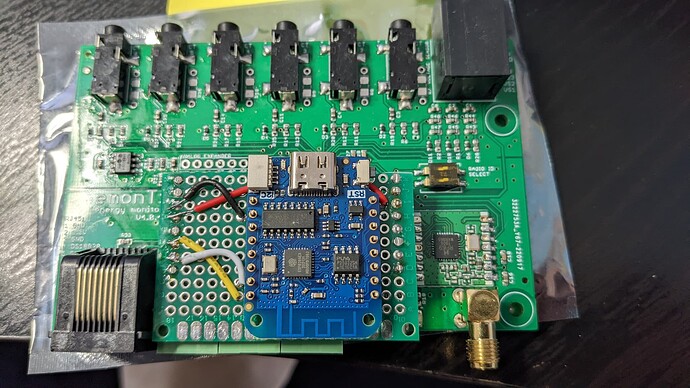 The Pi PicoW is another good option (Trystan has an add-on board prototype for that) which is being looked at.

I suspect, the basic RFM unit will come first with the other options following on. However, doing it yourself, is relatively painless.

Thank you for the replies @TrystanLea @borpin

The TX v4 per phase would work well I think (especially once the extender is available). Your adapter board suggestion sounds like a neat solution too if that is workable. Thank you for your continuous innovation!

WiFi might have to be the solution for me with the TX v4 by the sounds of it. I’ve enjoyed the simplicity and 100% reliability of RF so am slightly sad to change.

I happen to have a few Pi Zero’s (3 I think) knocking around following a failed room assistant deployment, would they be suitable for Wi-Fi enabling the TX v4’s?

I’ve enjoyed the simplicity and 100% reliability of RF so am slightly sad to change.

It is as a single deployment, but the interference some have experienced with multiple devices is the problem.

I happen to have a few Pi Zero’s (3 I think) knocking around following a failed room assistant deployment, would they be suitable for Wi-Fi enabling the TX v4’s?

Search on here for the solution - I’ve got a couple doing exactly this.

I’m not sure where @TrystanLea is with the PiZero extension board he has prototyped. That board would just plug in in a similar way to the board above. You would need to solder it on yourself, however.