I have two solar arrays, each with a CT to measure production. The CTs are orientated with +ive current (generation) flowing as per the arrow on the CT. Should be never negative as the loads are ‘downstream’ from the CT.

Why is solar production data flipping from +ive to -ive?
Blue line switched (reboot Pi?) on the previous day, now today both -ive.

When I initially plugged in the Solarbridge CT is was reading +ive for production, but today both are -ive again!

Very confusing, especially when I want to combine his data with a grid import/export CT data to get (total) household consumption data. 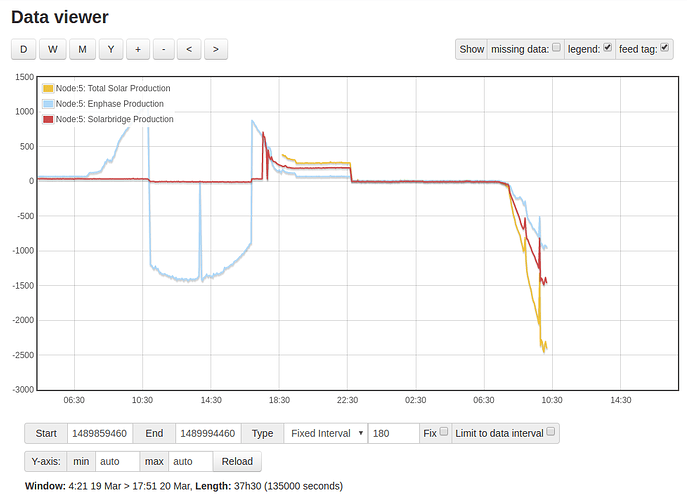 This graph shows an Air conditioner that’s been running today. Just where the polarity of the signal flipped, it was briefly turned off, as can be seen in the zommed graph.

Is this something to do with the way the power calcs are done, looking at the phase between the current and voltage to determine direction (I thought I read that somewhere).

It seems something is wrong somewhere in my setup. 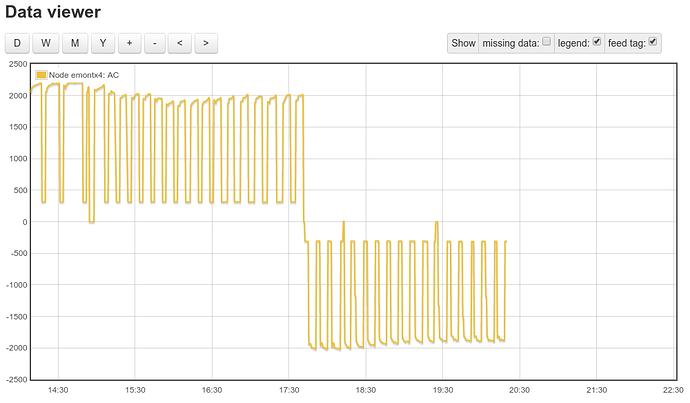 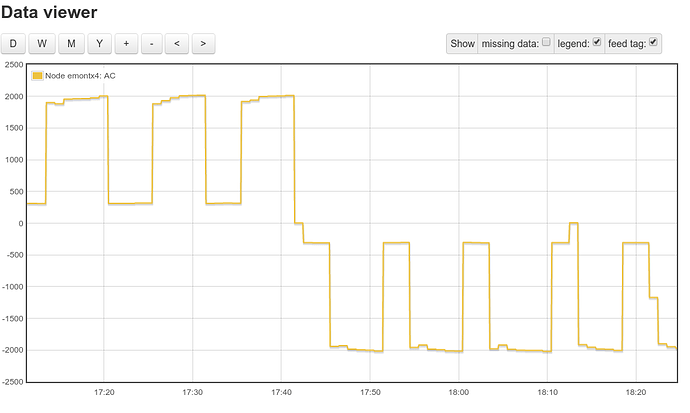 Looking at other data around that time, the two solar production feeds had a step, and another feed “stove oven fridge” also inverted polarity. Another, “pond” remained constant (red line). 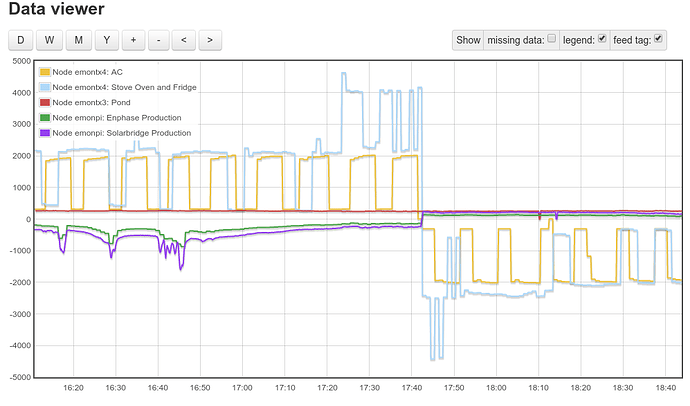 Further investigation… I was swapping the AC plug pack feeds to the co-located emonTx and emonPi earlier tonight to investigate a voltage difference in the Vrms readings.
I just swapped the plugs again, and the power readings inverted again.
I’m thinking that the output of the two plug packs are 180 degrees out of phase/wired in reverse and swapping them inverts the reference signal for each board, flipping the indicated power direction. Does this make sense?
Short of looking at the AC outputs of the plug pack on a CRO (which I don’t have at home) I’m not sure how to debug this.
The gist of my other thead was asking if it’s OK to use one AC pack for the reference for multiple emon boards. Perhaps if I do that they will all have the same relative polarity.

So I remove the AC plug packs (I have 3) so I can take them to work tomorrow and check the polarity on a CRO. I suspect one is inverted relative to the others, which is why the readings from the emonPi (that had the possibly inverted AC reference) were negative despite the orientation on the CT’s (I wired them so the readings would be positive).

Another trap for young players, when I pulled the AC, the power readings went to zero… Without a reboot to detect the missing AC, the emonTx and emonPi thought the voltage had suddenly dropped! So after a reboot, those started sending valid (less AC reference) data.

mmm more reading… Is this issue because I was powering my emonTx via 5V and JP2 was installed (AC Plug pack also connected).

It sounds as if you found the problem. The direction of power is indeed defined by the relative phase of voltage and current, and a.c. adapters with reversed phase have been known on rare occasions in the past.

when I pulled the AC, the power readings went to zero

Is it not obvious that you cannot measure power without knowing the voltage? !
The only “trap” - as you put it - is to use a nominal value for voltage and report apparent power, if an a.c. input is not available at start-up. This is by design.

You don’t need a 'scope to check the relative phase between pairs of a.c. adapters. Common one side of the connectors (say the barrel) and measure the voltage between the other sides (say the centres). If the two are the same, you measure zero (or close). If they’re opposite, you measure about 20 V.

You don’t need a 'scope to check the relative phase between pairs of a.c. adapters. Common one side of the connectors (say the barrel) and measure the voltage between the other sides (say the centres). If the two are the same, you measure zero (or close). If they’re opposite, you measure about 20 V.

Good point, but it will take just as long with the scope at work and I get to look at some pretty sine waves

I get to look at some pretty sine waves

Whatever turns you on! Personally, I’ve seen enough of them.

I suspect one is inverted relative to the others,

If that’s indeed the case, flip it over and plug it back in oriented 180° from its original position.

That might work for you, not for an Australian plug (= polarised).

I’ve checked the packs today, and one was in fact reversed. I need to solder 3 plugs onto one pack to feed a emonPi and 2 x emonTX’s, so I’ll flip it then. (I’ll be powering them from 5V separately).

I have the UK plug version, that I could flip (as I am using them with an eBay adapter to Aus plug) but that would leave the earth lug swinging in the breeze (even though it’s probably not even connected in the pack).

I have to do the 3 way soldering mod, so may as well flip the polarity while on the job. Two out of the 3 I have are the same polarity