If I understand things correctly, the project at GitHub - InfernoEmbedded/PowerScraper: A scraper for power devices to feed data to OpenEnergyMonitor allows reading power generation data from Solax inverters, but uses Modbus over TCP by default.

On our Solax X3, however, there is no TCP/IP connection at all. The only port that seems useful is what they call an RS485 port in the manual, with an RJ-45 connector. Questions:

Sorry for the beginner questions, I’m more a software than a hardware person

Welcome back. Looks like it’s been a while since you last visited.

Your user manual should specify the minimum data extraction interval.
If not, you’ll need to ask the manufacturer.
A general internet search, e.g. Google, might yield an answer.
You may find you’re able to extract the data at say 10 second intervals, but that it’s updated
at an interval greater than 10 seconds. e.g. every 5 minutes.
(10 seconds and 5 minutes are just examples)

How do I connect physically to this?..

The pinout should also be in your manual. Again, if not, Google is your friend.
You’d need a way to attach an RJ-45 connector to the proper cable (crimp tool)
or you could cut one end off of a pre-made cable, e.g. a cat 5 network cable.

You haven’t said what the exact model of your inverter is. The user docs for the X3 Mic say
the RS485_A and B connections are “provided for engineer to adjust the inverter.” so pehaps not.

There is another pair of RS-485 connections, but they are specified for a meter. 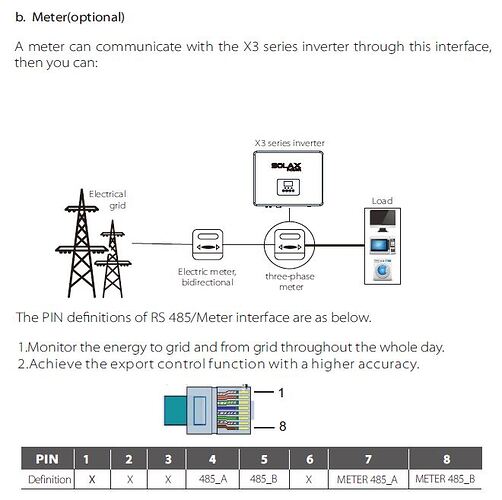 According to their website, Solax makes four versions of the X3.
Which variant of the X3 do you have?

Going by what I see in the user docs it appears the RS-485 function of your inverter is not
used for data extraction. However, I could be wrong about that. That’s why we need to know
the exact model of your inverter.

There is also talk about using the correct terminating resistors, what is that about and how do you put these in?

The terminators are 120 Ohm resistors connected across the wires attached to the A and B pins mentioned in your manual. (one resistor at each end of the wire run)
For a short cable run (less than a few tens of meters) you may not need terminators.

At the inverter end, there should be some sort of attachment point. i.e a place to connect
wires to the RS-485 pins. Your manual should have some info on that as well.
Not being familiar with the inverter you have, I don’t know what type of connectors are on it.
Typically, manufacturers use screw terminal blocks. But that varies with the manufacturer.
Connections at the other end of the cable will be determined by the RS-485 adapter.
Two examples of adapter connections are solder type, and screw terminals.

Sorry for the beginner questions,

NO worries. All of us were at that point at one time or another.

Welcome back. Looks like it’s been a while since you last visited.

Thanks for the quick reply. Yes, it has been a while, the emonpi has been working very well without much need for intervention

According to their website, Solax makes four versions of the X3.
Which variant of the X3 do you have?

It is the “SOLAX X3 9.0 T D”. The only pin definitions I see in the manual are the ones under “Meter interface” as you have shown. I am unsure if this is a kind of modbus interface that is addressable over a USB-to-serial interface? If so, I think @deece 's PowerScraper could be used to get the data. I asked my installer for details on the RS485 port, but I doubt they will tell me anything, there seems to be a very annoying tendency to lock these things down.

I asked my installer for details on the RS485 port, but I doubt they will tell me anything,

Seems to be a common issue with installers. But, to be fair, they may not know.

You might have better luck asking the manufacturer. Then again, they may not be of any help.
No way to know unless you ask.

Indeed, asking Solax (phone, don’t mail as @deece suggested) did the trick, very much to my surprise. Their service was excellent! It turns out the Solax X3 uses a totally different protocol from the X1-hybrid. The pins 4 and 5 are indeed the ones to connect, PR with the protocol is here: Add support for RS485 Solax X3 by barche · Pull Request #16 · InfernoEmbedded/PowerScraper · GitHub