I have a new emonTX v3.4 Discreete sampling v2.90.
issues:
When compling the sketch in Arduino IDE i get compile error messages for src.ino and config.ino. 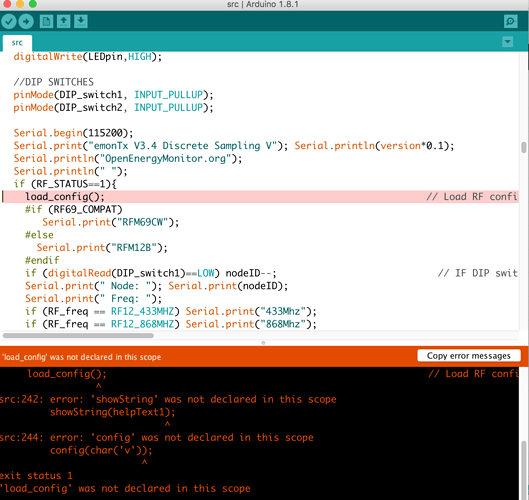 I have it connected to my mac with serial cable. i can see serial monitor results using Arduino IDE OK. so the serial connection is fine.

I have all dependant libraries installed.

and the url/link describing how to setup the arduino IDE environment does not seem to work.
link is found on this OEM wiki page called “Setting up the Arduino Programming Environment”

(blush)
it turns out the problem was “between my chair and keyboard”.

two files are required to be in the sketch folder;
…somefolder…\src\config.ino
\src\src.ino

I put these files in the correct place and restarted my computer and voila! The sketch is now compiling ok and uploadding to emonTX using Arduino IDE.

Yes, the Arduino IDE includes all files in the same directory as the ‘named’ file you’re compiling, and for those it doesn’t need an ‘include’ directive or anything like that.
So really, unless/until you know that, the only little clue as to what’s missing is the error that told you “showString( )” and other things were missing (not declared) and pointed to load_config( ). But it didn’t and couldn’t tell you which file load_config( ) was in.