this is driving my insane hopefully someone will know how to set this up.

A bit more information on your set-up, what you had to monitor your system before you added the car charger and what you have now after adding the charger, will be very helpful, because reading your post, I haven’t got much of a clue as to what you’re on about. I see from your activity you have a BMS and an emonPi, but that doesn’t help a great deal - but it might affect what you need to have. Remember, all we know is what you tell us - we’re not mind readers.

{Is “extorting” a Freudian slip, given the recent price increases?

Thanks for the quick replay

Ive not used my emonPI for some time so this is a resurrection of on old project, the extortionate cost of energy has put it back on my radar want to combine the readings with home assistant automations max self consumption,

its like i need a 3rd clamp for the car charger 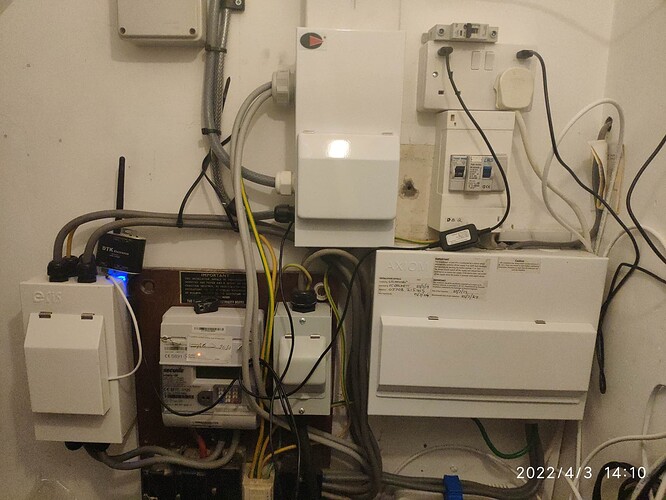 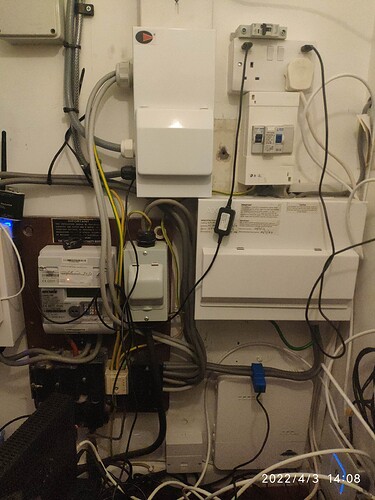 I’m afraid there’s a bit more work that I need you to do. There’s far too much knitting and not enough labels for me to understand what each unit is and what the connections are. Can you do me a simple single line diagram showing what each box is and the order they are connected. By “single line”. I mean just that - the line (brown wire, or marked with brown tape, or red if it’s old) connection to the meter(s) Henley blocks, consumer units, PV, car charger etc. I don’t want either neutral or earth - we assume those.

By way of a (simple) example, this is the “Type 1” installation in that form: 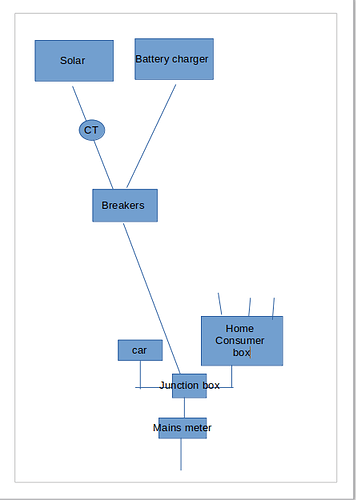 You are talking about your emonPi, I take it?
And as you know the difference between import and export, it must be using the a.c. adapter?

If it’s only the sign (import vs export) that is wrong, then turn the c.t. around on the conductor to face the other way. If you have CT1 either side of the main meter but on the supply side of the junction box, and CT2 between “Solar” and “Breakers”, you have a classic “Type 2” installation.

The sum you are doing inside emonCMS is house use (includes the car and battery charger) = PV + Mains = CT1 power + CT2 Power.
If you switch off everything in the house¹, the battery charger and the car, “Grid Power” should be negative and exactly equal in magnitude to “Solar Power”, which is positive when generating - that is our convention. Due to calibration errors, the numbers might not be exactly the same.

[You expect solar power to be a tiny negative value when it’s dark, it’s the power needed to keep the inverter awake.]

¹Except of course the emonPi and whatever you need to read it.

I think that’s to be expected - you’d be counting charging or discharging the batteries as “house use”. I think what you’re seeing will be correct, it’s just not the answer that you expected or wanted.

I think you need to rethink what you want to know from your system, then we can decide what you need to measure and the maths you need to do to provide you with that data.