Can this gas meter be monitored?

OK this is a really long shot but I have an emontx v3 which is currently connected to the emoncms cloud service. Two CT clamps will be collected to grid and PV

If possible I would also like to monitor gas consumption. From research it would seem this can be done in some cases by using a pulse sensor - I guess this depends on the type of meter.
An idea if I can do this with this meter? 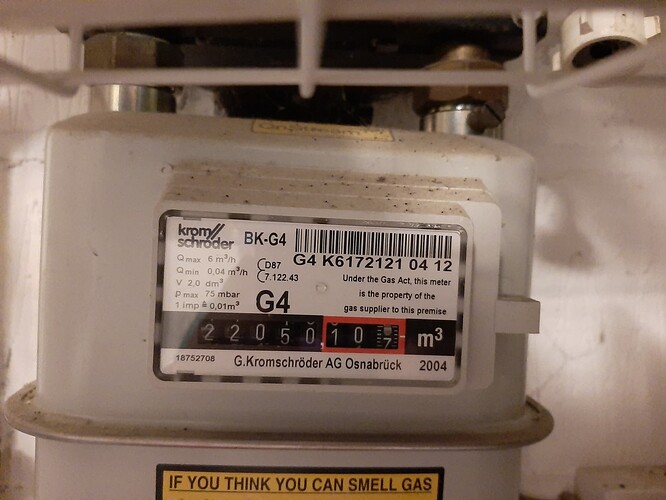 So if I read the following article it could be possible - has anyone done this ?

I hope it is permitted to post github links.

It seems unlikely that there will be a magnet inside the ‘fastest’ register drum, but it’s worth checking - a magnetic compass (a real one, not a smartphone) is the best tool - because a reed switch uses minimal power and is extremely simple to do, whereas the optical detector will almost certainly need a high capacity battery or mains power.

I created a Raspberry PI Zero that counted the reed input from the Gas meter. As long as you have a reed. Normal hidden below the bottom of the reading face. If interested let me know and I’ll post the code a how to do it. Had a G5 gas meter.

Now have a Smart ish Gas & Electric one now. :o(

Thank you very much.

My first milestone- which I hope to achieve this weekend is to run the ct cables from the outside grid and pv cabs to the emontx inside. This is of course job list permitting !

Normal hidden below the bottom of the reading face. but @BerkshireBugsy’s meter looks to me as if it’s nothing like that - which is why I wrote that I thought there would not be a magnet available to sense - if one were to be there, the steel case would shield it almost totally, I think.

Okay, doesn’t look like you have a RJ11 on the bottom. :o( Good news is it that you might be able to fit a reed switch by where you can see the numbers on the wheel and that might have a magnet strong enough to pull the reed together? You could use a multi meter to check it out first. Failing that. Then, the numbering is quite clear from the picture and the Raspberry Pi has an option to use a camera. Which would be able to tell you the number from the picture. Those are the DIY option. However, there seem to be a pulse on the front of the meter from what I can see that could also be used via Optical sensor? I think that this can be used on a emonTx. Which is probably the least DIY. Tad more professional :o)

Obviously, each idea comes with increasing power requirements and costs.

However, there seem to be a pulse on the front of the meter from what I can see

Perhaps you can elaborate? I cannot see, and wouldn’t expect, an LED on an 18 years old gas meter. Where is the power coming from to drive it?

Many years ago, I found a creative individual had used the optics from an optical mouse to watch for a pointer going round a dial, presumably the same could be done with the reflective spot on the register if it’s not too far behind the glass window.

I think most of your other suggestions have already been considered.

On this actual site is an example on Hall or Magnetic option.
https://learn.openenergymonitor.org/electricity-monitoring/pulse-counting/gas-meter-monitoring

Hope this clears up the idea. True the optical depends on how it registers the change. As the silver ‘0’ might be enough for it to register, or it’s back to the reed switch.